The following is an unsolicited rebuttal to “Superman Must Die,” by Manny Duran, from Unwinnable reader Manuel Ramirez.

I am not sure how it all started, but the chorus of loathing for the Man of Steel has reached epic proportions in recent years. Fans lament that Superman is too strong, too fast and too invincible – even his weakness against Kryptonite has stopped being a weakness. Because of this, they say, he is no longer a character worthy of attention. These comic book fans, seeking grittiness and “real life,” lust for a day when Superman can be cast aside as the mythology of a simpler and less progressive age.

I contend that Superman’s greatest power is not in his ability to land a punch, throw something into the sun or shoot lasers from his eyes. Rather, his greatest superpower is the moral foundation built on his basic principle of doing what is right. What Superman personifies is the ideal that all of humanity can aspire and achieve greatness.

Manny Duran argues that the time has come for Superman/Kal-El/Clark Kent should step aside and finally die. In this way more human superheroes can step in to fill the void. Duran comes to this through the philosophy of Nietzsche, specifically his proclamation that “God is dead.” As Duran so eloquently puts it, the death of God means the “beginning of change” since God is no longer around to “provide values and morals” for us to guide our lives.

Is this truly the world Duran would like us to live in? A world where moral certitude is no longer accepted? A world where we happily accept treachery, deceit, lies, double-crossings and other forms of moral depravity? Is this the kind of change we need and should embrace?

I agree with Duran that Superman as a protagonist is difficult. Writers of Big Blue tend to focus on his physical traits. The true appeal of Superman is not in his ability to overcome physical exertion, but in his ability to face moral uncertainty. We want to watch him struggle to make the decision that remains true to his values and principles.

In the latest Superman film, Man of Steel, we watched in amazement as he battled General Zod and other Kryptonians who equaled the power of the son of Jor-El. The movie is not short on spectacle. Yet, the greatest battle for Kal-El comes in the final moments of the film, when he must make a choice based on his principles. In these few seconds, Kal-El becomes truly human. The dreadful choice is visible in all its emotional aftermath as Superman falls to his knees.

And yet many Superman fans hated this moment.

The fans cry for Superman to come down to our level, and when he does, they cry for him to return to his godlike status, complete with rationalizations on how Superman should’ve reacted. Hindsight is 20/20. Superman is human after all.

Unfortunately Duran views Superman as the representation of everything that is wrong with America. Duran states that Superman is “the zeitgeist of American exceptionalism.” Is American exceptionalism a bad thing? Why is it considered bad to believe I was born in the greatest country on Earth, where great things happen on a daily basis? 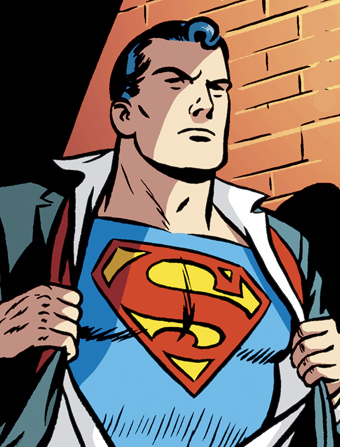 Hurricanes and tornadoes strike and the outpouring of human sympathy results in a flood of money and supplies to those affected. Even when tragedy strikes outside this country, Americans donate time, money and goods in ways that are unmatched by other countries.

Superman is a voice for the greatest economic engine the world has ever seen, and far too often there are people in this country who wish to dismantle that engine because they somehow feel guilty for what it has accomplished. There will always be people who have more than others. However, Superman represents the idea that even if you have less, you can achieve and earn great rewards through hard work, dedication, and adherence to moral values.

In a country deeply divided along political, racial and economic ideology.  We need Superman now more than ever; not for his ability to punch Zod in the face, but so he can remind us all that moral absolutes do exist. Superman inspires us to embrace and celebrate every human being through Truth, Justice, and yes…The American Way.

First Look at the New Man of Steel