Another brilliant issue of Usagi Yojimbo, another lesson learned. In this issue the reader learns what a kappa is, and is also taught a subtle lesson about racism and generalization of a race of people. Or in this case, a race of monkey/turtle/humanoid river dwellers that eats cucumbers and contains the liquid essence of its life force in bowl-like indentation on top of its head.

Stan Sakai has played with all sorts of genres with his Usagi Yojimbo masterwork, and in this issue he leans more towards Japanese folklore that quite literally features a monster of the month. What makes Usagi Yojimbo the creator-owned, ongoing, labor of love that it is, rests mainly on Sakai’s ability to do whatever he wants with it. One issue can be a sober morality tale, the next a takeoff of Kurosawa or H.G. Wells. Usagi could be fighting in a real historical conflict, or against  a clan of vampires like what seems to be happening next issue.

This one-off issue starts with Usagi helping some villagers building a flood wall against the encroaching river during a storm. One villager gets too close to the water and is dragged in by a vicious kappa. Usagi is unable to save him, and the villager drowns. In a quest for vengeance, and maybe answers, Usagi rushes off to locate the lair of this creature.

After finding a cave by the river and venturing in, he encounter two kappa, one adult female and one 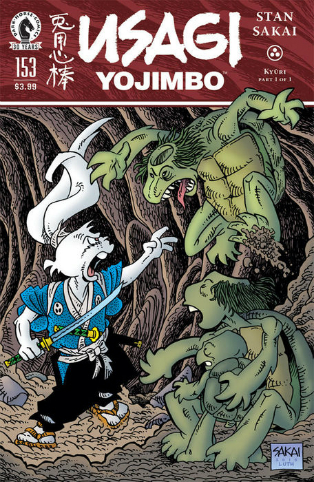 child, and begins spitting threats. The female kappa quickly explains her situation that, she has nothing to do with the renegade kappa who is going around killing both humans and his own kind, and in some cases eating them. While she doesn’t trust samurai, she says she’ll help him track the renegade down. The issue goes into almost horror territory as Usagi confronts the murderous kappa in the depths of a pitch black cave.

Sakai’s art in this issue is a little looser. At first I thought by accident, but as the issue went on I realized that he was conveying the panic of the opening flood scenes, as well as Usagi’s rage and vengeance after the villager dies. Things settle into a groove once he meets the innocent kappa, and then almost go into creepy, Mike Mignola, territory when Usagi has his showdown with the rogue kappa. Sakai proves once again what a veteran he is by pulling this off in 24 pages.

He also hints at a moral to this tale of not judging a whole group people based on the actions of one bad apple. This is certainly something we can all apply to the current world that we live in. Sakai touched on the theme of racism and prejudice in the last issue I reviewed (#150), but it’s interesting that it’s his main character guilty of it this time, before he literally sees the light by the end of the issue.

It’s so refreshing to take a break from the decompressed norm of modern comics and enjoy a story in an issue that has a beginning, middle and end. This tale in particular brings me back to a book of Japanese folklore, which I’ve referenced previously, that my parents had around the house when I was growing up. I remember reading about the kappa and being fascinated by their weirdness. They can be played for both scares and laughs, and the detail about a little bowl of water being where their brain should be was instantly engrossing to a young me. In this issue they are also a way to teach morality. Once again Usagi Yojimbo succeeds in transporting me back to that wonderful feeling of discovering a new aspect of a rich cultural folklore.

Thanks so much to Dark Horse for providing us with a preview copy of this issue, Usagi Yojimbo #153 is available at a fine comic book store near you this week!

Action Comics # 50 marks the end of Greg Pak and Aaron Kuder’s run on the title. They began their run the New 52 origin of the Fortress of Solitude’s alien zoo and they ended with a dying, Kryptonite powered Superman and his friends taking on an immortal tyrant. As much as I’m going to miss t-shirt and jeans Superman, I’m going to miss Greg Pak and Aaron Kuder’s take on Superman even more.

I’m not too crazy about most of the New 52 redesigns but Superman’s made the least sense to me. He’s Superman. Why does he need armor? And no, the armor being a Kryptonian artifact doesn’t make Superman wearing armor any less dumb. Aaron Kuder, like Greg Capullo over in Batman, found a way to accentuate the more iconic parts of the costume while minimizing the costume’s many needless lines. He’s the only artist who makes that costume look like Superman, and that’s very important for this issue.

For the better part of a year, Superman’s been severely de-powered. In the issues leading up to this, (and explained in this issue via exposition) Superman’s been the hero he always was, despite his punch not packing as much wallop. He could still leap tall buildings, but flying was out of the question. He literally got back to his roots as his power set mimicked that of the original, Golden Age Superman the world met in 1938. 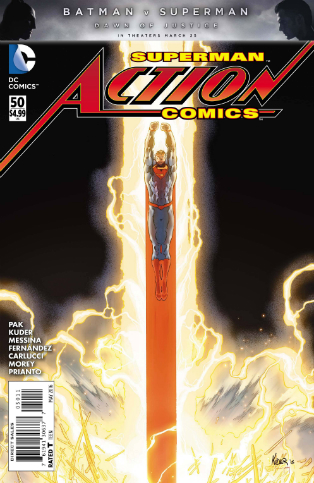 took it a step further. After Clark was de-powered and exposed about halfway through their run, he returns to his neighborhood in Metropolis expecting his neighbors to be wary. Instead, they throw him a block party. And so, Superman begins to really get to know his neighbors. That’s the thing I really dug about the back end of this run; it’s been a story about what makes Superman, well, Superman and this issue culminates that arc (if not the Vandal Savage story).

Pak and Kuder spend a chunk of this issue catching readers up. It’s a big anniversary book, so more folks can buy it and not get lost. The recap splash pages are gorgeous – Kuder’s work flows like a linear Devil by the Deed here. Kuder does all the layouts in the book, and if I have a complaint, it’s that the pages finished by other artists take me out of the book a bit. But the stuff drawn by Aaron Kuder? Oh, it’s so good!

As the cover and a lot of the press for this book hint at, Superman is himself by the end and the sequence is so good, I don’t mind the costume. It’s a story about how Superman triumphs and gets his powers back through the strength and depth of his friendships. That’s the BEST kind of Superman!