For all of its flaws so far, The Star Wars has at least given us more Mike Mayhew. I’m a huge fan of his character designs, his stark and polished realism and the cinema-like quality he’s given the comic. This last part is especially important, considering how much The Star Wars depends on the visual medium. 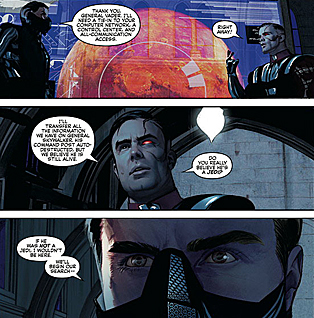 The story has been hit and miss, the ending of each issue is always abrupt. This one is no different, but the story is looser and not so compacted, and it doesn’t ping from moment to moment. J.W. Rinzler really establishes a flow to his writing in this issue, maybe due to its stationary setting. Everything is more linear, and the story easier to follow.

This issue is also a more recognizable version of George Lucas’ A New Hope, but mostly in dialogue. Even so, the book has started to take greater strides away from its original influence. We’re introduced to a few more characters, but the alternate versions of the ones we know (like Han Solo) have yet to be introduced.

Still, this is the issue that really hooked me. As The Star Wars has progressed, the series has found its footing, and this is no more visible than in issue #3. The comic continues to have pacing issues, but we’re at least getting a more developed story.

With each issue, I’m getting more and more into The Star Wars. It’s standing in the shadow of a giant, yet finding a way towards its own light. Visually, it’s stunning. And while J.W. Rinzler hits a few bumps along the way, his storytelling is also improving.

So in the wait between now and J.J. Abrams’ Episode VII, pick up The Star Wars to satiate your need for Jedi, Darth Vader and endless hordes of intergalactic stormtroopers. 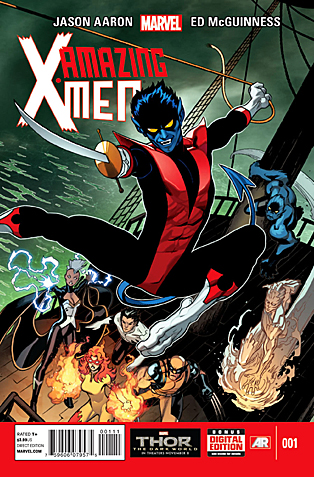 Something about Amazing X-Men doesn’t stick with me. I like the premise: Nightcrawler has discovered a way to return from the afterlife, but his process is wreaking havoc with the X-Men.

What doesn’t work for me is the humor Jason Aaron throws in. Why does Beast have a coffee pot named Eleanor? Why are Storm and Wolverine talking about sex in the middle of a crowded school hallway? Why is Warbird kicking down Iceman’s door in order to “sneak” into his room?

Jason Aaron does not seem to want to tell a serious story. He wants to have fun with the X-Men. I can respect that. But given the seriousness with which he begins the comic, the tonal shift in the middle throws off any traction Aaron creates with his opening. The introduction was interesting – Nightcrawler is attacked in the afterlife by his father, Azazel, and he comes to the realization of how he can come back.

But when Aaron shifts to Angelica Jones (Firestar) arriving at the Jean Grey School, the comic becomes a parody of a “new teacher arriving at a crazy school” story. Much of Firestar’s introduction is her looking perplexed by the diversity of mutants when she herself is one!

I just don’t think I can get into this series.

Ed McGuinness, at least, provides some nice eye candy. There’s a smoothness to McGuinness’ designs that makes each image sharp and polished. However, the beginning of the comic is definitely better than the rest of the book, because McGuiness starts to use smaller, tighter panels to depict the action so the imagery ends up losing detail. But the splash page of all the mutants together is a work of art, and the colors Marte Gracia uses towards the end of the comic bring the visuals to life.

I was disappointed by Amazing X-Men. The X-Men have been putting out great books lately (All New X-Men, in particular) so taking a chance on this book isn’t really a gamble. But the end result is nothing this reviewer wants to keep on reading. Try it on for yourself, but personally, I’ll be passing on Amazing X-Men from now on. 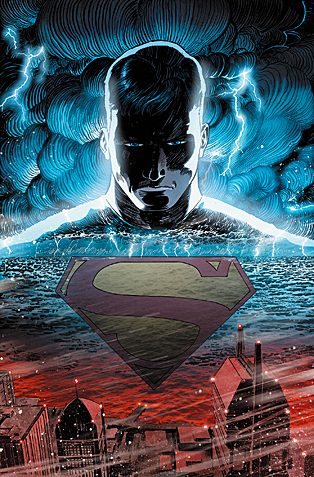 Bannen’s Book of the Week: Wearing the moniker “Zero Year,” Action Comics #25 tells the story of a guy dressed in a blue t-shirt embroidered with a red “S” appearing in the next major city over from a guy dressed as a bat. This is the only connection the two comics have, so eschew any need to find connectivity between them, because it’s not really important.

But what Greg Pak does is tell a hell of an entertaining story that gives readers a continuity-free peek inside the Man of Steel’s brain so we can know, for one day, what it’s like to be the most powerful man on Earth.

First the critique: Pak ties Clark’s story in with Lana Lang’s, but Lana’s role in the story is really unnecessary. As a foil to Clark, Lana shows that even adventurous people without powers can also find themselves in the middle of chaos, and they often love it. But as Clark’s the real star of the issue, her dialogue and presence don’t contribute to the story.

What Pak does very well, though, is show us what it’s like to be Superman when everyone is terrified of you. The humor around these situations is perfectly timed. Pak hits the beats with aplomb, and the result is a comic that’s heavy on action while being light on tone. So while what we’re seeing is pretty intense, Clark’s internal dialogue makes the situation manageable and fun.

In Pak’s world, Clark loves being Superman. He loves the challenge, the ability to test himself, and the way people react to his powers – even when they’re running away. What makes Bruce so potent as a hero is his resourcefulness; Clark is no different, except he doesn’t have a belt full of gadgets. He’s just got his brawn and his brains.

Aaron Kuder’s art also gets better as the issue progresses. He’s heavy on the inking at first, making faces a bit distorted. But beyond that, Kuder’s art gets tighter, and his panel construction more creative. This gives him the visual space to depict Clark’s antics and to tell an impressive amount of story. Despite the chaos on the page, the imagery is sharp and colorful. Kuder really captures the lightheartedness of the issue.

In such continuity-heavy times, it’s nice to see a continuity-free issue. So despite its “Zero Year” stamp, Action Comics #25 is in a world of its own and quite happy to be there by the looks of it.