Would you fly 750 miles (then rent a car and drive another 80) to eat at a soul food restaurant days before it closed its doors forever?

And – lest you think I’m two side dishes shy of a lunch special – I did it just last month. 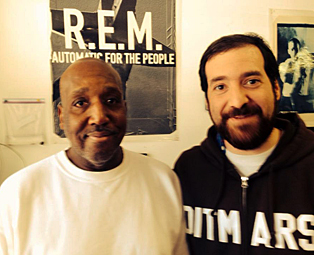 Athens is the birthplace of R.E.M., a now-defunct indie rock group turned major label Rock and Roll Hall of Fame act that means as much to me as any band ever has or ever will.

And Weaver D’s, owned and operated by Dexter Weaver, holds a special place in the band’s history. Dexter utters his catchphrase – “Automatic!” – when patrons order fried chicken or collard greens or the sweetest iced tea you’ve ever tasted.

And on the sign outside his restaurant are these words:

If you know R.E.M., or came of age in the ’90s, you already know where I’m going with this. For you whippersnappers, Google it.

Needless to say, when I heard Weaver D’s – facing rising costs and advancing age – was shutting down, I knew I had to make an emergency pilgrimage to Athens.

I’d been there before, but on a Sunday. Weaver D’s was closed. We ended up eating elsewhere – where, unbeknownst to us until we got up to use the bathroom, Michael Stipe was sitting directly behind us for our entire meal.

The great thing about Athens, even an Athens without Weaver D’s, is that it’s jam-packed with R.E.M. history. The steeple of the church where they played their first show – as Twisted Kites – still stands. The club where they performed for the first time as R.E.M. is still there, too, though with a different name.

So is the record store – Wuxtry – where lead guitarist Peter Buck worked and where he met a shy art student customer with similar taste in music – Stipe.

The train trestle from the back cover of their debut album, Murmur, isn’t too hard to find. But the kudzu patch on the front cover requires parking by a small water tower, then walking along the railroad tracks before descending a ridge covered in loose rocks.

It was a walk I’ve been wanting to take for years, never more so than now, two years after the band broke up, when a last-minute, hastily arranged weekend pilgrimage to Athens is all that’s left to get excited about – other than occasional solo projects, side bands, retrospectives and Onion articles.

The kudzu trek made my hair stand on end. Right after, we drove a short distance to Weaver D’s and talked to Dexter a bit about his restaurant. 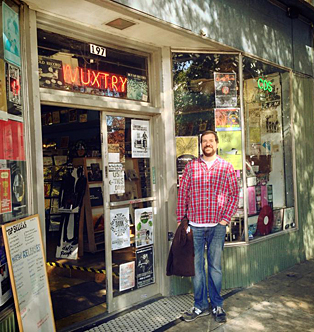 “They came all the way from New York!” he exclaimed a couple of times. At one point he sat down with us and later he posed for a picture in a corner by the entrance.

Mostly, though, Dexter had customers to deal with, and from our brief discussion it was clear he didn’t want to close; that maybe he was hoping for a miracle.

As I write this, he still has yet to close shop. I hope he never does, although even under the best of circumstances, it’s only a matter of time.

Perhaps as you’re reading this, it’s already too late to eat his fried chicken. Just like there will likely never be another new R.E.M. album and, even if there is, I won’t be 16 again, driving to the store to buy a CD copy of it.

Why does it seem like there’s a hundred goodbyes for every hello?

Matt Marrone is pondering ways to celebrate the 20th anniversary of Monster in 2014. You can follow him on Twitter @thebigm.

Rookie of the Year: Sometimes It Won’t Come So Easy
Previous Post

Pick Up Anything of Use