Much like a cold and calculating turkey lurking in the deep primeval forest with blood on its mind and stuffing in its guts, Thanksgiving has managed to sneak up on me.

I’ve always liked Thanksgiving because it doesn’t carry the baggage of Christmas and allows for bonding with families – blood relations and friends both. It also encourages laziness: eat a lot of food and then doze while watching TV. I’m not the biggest football fan, so give me some Die Hard to get me in the holiday spirit! Or, some of my favorite Thanksgiving-themed things from years gone by: 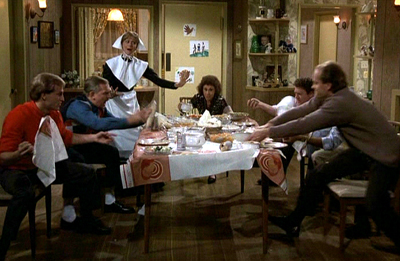 Cheers “Thanksgiving Orphans”
A classic episode from a classic series (season five, episode nine), “Thanksgiving Orphans” establishes early on that there will be Friendsgiving. With the exception of Diane and Norm, nobody in the immediate Cheers crew has anywhere to go for Thanksgiving. Carla decides to invite everybody over to her house since her kids are with their fathers. In the toy-ridden living room of the Tortelli household, Woody, Cliff and Frasier drink beer and watch TV, a huge departure from what they normally do in their downtime at Cheers. Then Norm shows up with a frozen turkey in a shopping bag after his attempt to convince his invisible wife Vera to come resulted in a fight. Then Sam shows up. Then Diane shows up in a pilgrim outfit, and nobody cares.

The episode culminates in a cathartic food fight. There are also some great little moments, like the toast to Coach – and Vera finally does show up for the first time in Cheers history! A stone-cold slab of classic holiday TV.

Beavis and Butt-head Do Thanksgiving
Sure, this is just a thing MTV threw together to boost ratings on Thanksgiving, but it’s still Beavis and Butt-Head doing what they do best: commenting on things that are cool and things that suck – case in point the boring Macy’s Thanksgiving Day Parade broadcast. When not pestering Kurt Loder, the boys visit a peep show in Times Square (Mayor Dinkins era!) and stare at a crowd of onlookers’ butts. This aired one night before the final episode of Beavis and Butt-Head, “Beavis and Butt-Head are Dead,” which is also worth watching. Well, it was the final episode until the show briefly (and gloriously) returned in 2011. MTV has since abandoned the series because they suck, but there is talk that Hulu may pick it up and order new episodes in the near future.

Mystery Science Theater 3000
“Night of the Blood Beast” is MST3K done in the Thanksgiving spirit; what more needs to be said? The segments have that Thanksgiving flavor, while “Night of the Blood Beast” is more about plotholes, bad alien costumes and other things to be expected from a Roger Corman production. While Mike and the Bots are being tortured by this movie about the crew of a space station being terrorized by a dead astronaut stuffed full of alien embryos ( or shrimp), a Thanksgiving party rages in the Satellite of Love. You will learn why potatoes are better than stuffing and why robots prefer pumpkin over mincemeat.

Also check out http://mst3kturkeyday.com/ this Thanksgiving for an MST3K marathon put on by creator Joel Hodgson and Shout! Factory! 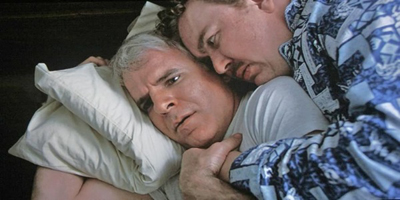 Planes, Trains and Automobiles
This 1987 classic of American cinema is a vital part of Thanksgiving weekend viewing. Steve Martin and John Candy star as two mismatched travelers who end up going on a precarious three-day odyssey from New York to Chicago so that Martin can get home for Thanksgiving. All of the methods of transportation in the title are utilized in an attempt to achieve this goal, which is made more difficult by an untimely blizzard. John Hughes wrote and directed this one, so it’s got some great humor mixed with well-earned heartfelt moments. You’ll never be able to hear the line “Those aren’t pillows!” again without thinking of this film.

Spider-Man: As the wheels keep rolling on another new Spider-Man franchise, it’s worthwhile to check out the original Sam Raimi film for the great Thanksgiving sequence where the Parkers, the Osborns and Mary Jane have an awkward dinner together. If anything, just admire Willem Dafoe’s unhinged performance as Norman Osborn!

Dutch: Another John Hughes road trip tale set during Thanksgiving. Hughes did not direct this one, which may be why it seems a little off. Ed O’Neill is great as Dutch Dooley, a man who has to drive his girlfriend’s son home from military school for Thanksgiving. Of course shenanigans ensue on their journey home, although sometimes it’s just cruelty between a man and a boy.

Uncanny X-Men #308: I remember this 1994 issue being about the X-Men playing football and sitting down for Thanksgiving dinner together. It’s also got some solid heartfelt moments, like when Jean Grey proposes to Scott “Cyclops” Summers!

Thanksgiving Trailer: After not being so impressed with Machete, I’m ok with Eli Roth never expanding on this trailer, originally seen with other fake trailers in between the two main features of the movie Grindhouse. The trailer looks authentic and drips with reverence for the trash cinema of the Seventies and Eighties. The idea of a slasher film set at Thanksgiving is a fun one, but my worry is that a feature would go from Halloween, or even My Bloody Valentine, into Thankskilling territory very quickly.

Grumpy Old Men: Walter Matthau and Jack Lemmon are both excellent in this 1993 comedy but man oh man! was potty-mouthed Burgess Meredith a treasure. 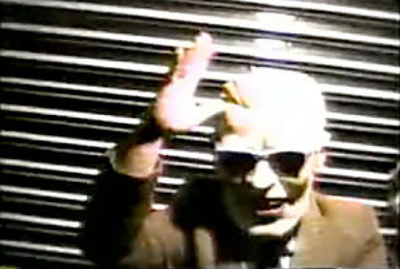 The Max Headroom Incident : If all this Thanksgiving family stuff is boring, then get weirded out with this bizarre Youtube clip. One day before Thanksgiving, in 1987, a man hijacked the signal of two local Chicago television stations. Wearing a rubber Max Headroom mask, the guy spouts all sorts of randomness and then pulls down his pants and moons the camera while a woman uses a flyswatter to spank his butt. None of these people were ever caught or identified.

Saturday Night Live “Nikey Turkey” video: Chris Rock raps to a Fresh Prince-style beat about the joys of a turkey that expands when you pump it.

The Simpsons “Bart vs. Thanksgiving” (season 2, episode 7): Because what would this list be without referencing The Simpsons? This episode manages to be funny and tug at the heartstrings, as Bart runs away from home on Thanksgiving and ends up in a soup kitchen.

Further viewing: If you wish to see the cast of Friends or Night Court celebrate Thanksgiving, then check out the handy Wikipedia guide for Thanksgiving-themed TV episodes and go from there. There is also one for movies set at Thanksgiving.

And now some food and a nap for me. Happy Thanksgiving, everybody!

When TV Was a Timepiece