My 35th birthday was a couple of weeks ago, and it was a rousing success in most every way. But the big joke is that none of my gifts were actually for me.

That’s not true, entirely, but I did get a shit ton of onesies.

I now have a lot of Yankees onesies and some San Francisco Giants onesies, too (we are to be a two-team household, much to my chagrin). I also have a onesie from Sesame Place, and I’ve picked one out online for the baby registry that says “Let’s Rock” – the immortal backwards words of Twin Peaks‘ Man From Another Place, ultimately to be splattered with Garmonbozia or something resembling it. 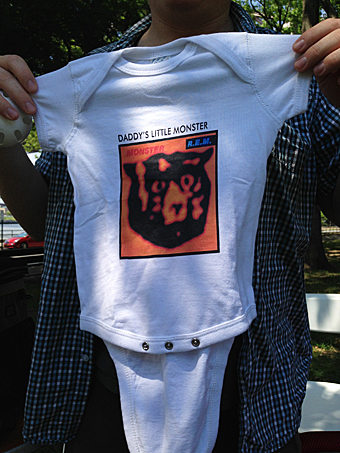 I am a geek and I plan to dress my baby girl in at least a few geeky outfits, just enough so that when her mother rolls her eyes they almost but don’t quite spin out of her head.

(I could probably write an entire column melodramatically recounting my tale of removing the Super Mario Bros. wall clings from the guest room in preparation for turning it into a “proper” nursery, except my martyrdom card has already been played enough lately. But check back in this space for it in the coming months anyway.)

My baby doesn’t have a name yet, may or may not have kicked for the first time and is still several months away, but she already has what I consider the Holy Grail of onesies, a gift on my birthday from my sister Suzy.

Regular Rookie of the Year readers (are there any?) know full well of my obsession with a particular disembodied bear head – a logo from the Tilly Balloon Co. that R.E.M. artfully blurred and slapped on the cover of my favorite record of all time, Monster, released when I was just 16 but nearly 20 years later remains the foundation of what I look for in art – surprise, mystery and, sometimes, a hearty fuck you.

Anyway, my sister took said disembodied bear head, the whole album cover in fact, and put it on a onesie with the words, “DADDY’S LITTLE MONSTER.”

When I opened the package in Astoria Park, where I’d rented a tent for the afternoon, I could barely muster the strength to lift it up and show it off. Had I succumbed to my urge to start crying on the spot, I
might still be sobbing now.

Must be those pregnancy hormones.

Matt Marrone considers the Monster onesie a collector’s item and may or may not let his daughter wear it. You can follow him on Twitter @thebigm.