This time of year – every year – the winter doldrums stalk me like a hideous monster, pawing and clawing at me till I’m battered, bruised and bloody.

While I do everything I can to ward it off, from Broadway shows to Vitamin D pills, few things actually work. 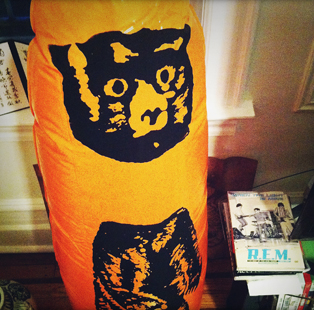 But I do have two steadfast allies: a disembodied neon orange bear head – and eBay.

The disembodied neon orange bear head is from the cover of my favorite record of all time, R.E.M.’s unfairly maligned 1994 fuzzed-out rock album Monster, and eBay is the bidding site I use to get every last bit of Warner Bros. promotional material that features it.

To date, I have collected:

• A Monster bear head vinyl record store sticker, which is affixed to my front window and is the first thing you see when you approach my apartment.

• A hockey jersey with a Monster bear head on it.

• Not one, but two four-foot-tall blow-up Monster punching bags. (These prized possessions not only feature the bear head – originally designed, incidentally, by the Tilly Balloon Company before being lovingly repurposed by R.E.M. via a blurry photograph by artist Chris Bilheimer – but also a computer-generated bear body that the band created to fit the head. I spied one of these “bop bags” at Wuxtry Records in Athens, Ga., the record store where Michael Stipe first met Peter Buck, and for a time it became my holy grail.)

• A poorly Photoshopped copy of the album cover with MATTSTER keyed in where MONSTER should be. Hint to Unwinnable eds.: Make a better one – or wow me with something even more creative – and you will once again earn my undying devotion (and upstage my writing).

• Various other Monster bear head-related items, from Monster on vinyl, LP singles and special editions, Monster tour programs, T-shirts, magnets, calendars and bootlegs, and even multiple copies of Monster on CD. I dream of one day turning a thousand Monster CDs into a coffee table, or some similar furniture item, when I am knee-deep in a midlife crisis and am granted a Man Cave by my future significant other.

• At least one other Monster bear head-related item I’m embarrassed to admit to owning in this column.

• And my latest acquisition, an actual Monster bear head mask, which I wore last week to freak out my little sister on a Skype chat. 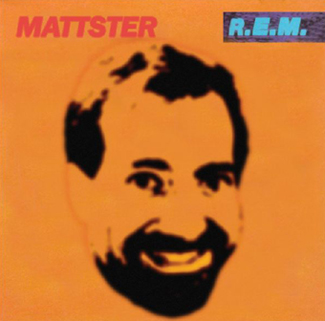 Just about the only thing I don’t have? A Monster bear head tattoo, something I’ve been debating with myself about getting since I was 16 years old.

I am not a tattoo guy. I am not a pain guy, either. And I’ve seen far too many tattoo nightmares and misspellings at Lamebook.com to trust any tattoo artist, with even the most glowing of Yelp reviews.

And yet part of me believes that one winter, as another dark, dreary, endless tundra spreads itself before me, I will walk into a tattooist’s with one of my Monster bear head promo items, perhaps the largest and brightest to provide the best possible example, and demand to have it stamped somewhere on my body, permanently.

Until that day comes, there is eBay, and that long-ago era when record companies actually promoted music with collectible swag. Ensuring that, someday, people could buy it, decorate their apartments with it, and try to remember a time when the sun was shining a little bit brighter.

Music, Rookie of the Year, Toys

The Critic and the Cloud