The best trick, er, illusion any revived TV series can hope to play is the renewing of an old formula without ever really touching it. Arrested Development’s fourth season comes close to hitting that mark, only foregoing the structure from whence it came.

The 15 made-for-Netflix episodes arrive seven years after Fox unexpectedly cancelled the show, which at the time was critically well-received – it’s very good – even to the tune of six Emmy awards. But by its third season, it was one of the least-viewed prime time television shows on the major four networks, averaging only about four million viewers per episode (compared to Seinfeld’s 20 million a decade earlier). It wasn’t until after the show’s creative martyrdom ended on a memorable note that its popularity started to stick and Fox realized it had made a huge mistake. 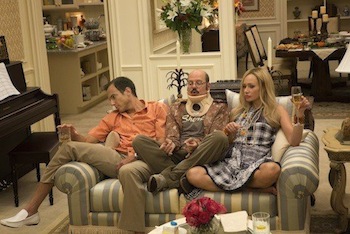 Meanwhile, Netflix continued running the first three seasons of the show, slowly building the clamor by word of mouse. That is, until series creator Mitch Hurwitz and producers Ron Howard and Brian Grazer took the showboat to Netflix for an official pitch, which the content provider agreed to back as a “semi-original” for what would become a fourth season for the cast and crew. And so the Bluths find themselves in a somewhat less-interlocked struggle for more money (except there isn’t any) and a bigger piece of the company pie, though none of them seem to own anything.

Thanks to the regurgitating hive mind of the Internet (and, I don’t know, good writing or something), Arrested Development’s fourth season enters into a fanatic marketplace with untenably high expectations. But to even be a “cult show,” as it’s often billed, the preceding seasons had to be a bit unexpected in their niche popularity, which sets a different expectation for the interwoven gags, the archetypal (but lovable, gotta be lovable) characters, and comically overwrought social commentary. And it comes ever-so-close to meeting that expectation, which says a lot for the cast and crew.

But, as it turns out, making a television show for a vocal throng is very different than making one in hopes of staying on the air. So the self-referential nature – call it fan service –  of the fourth season comes as no surprise. But the structure of its delivery is a bit off-putting.

The slight change to the opening credits captures the shift well. The Bluth family’s financial losses have been replaced by their “future [that] was abruptly cancelled,” and the efforts to keep the family together replaced by “the [family member] who had no choice but to keep himself/herself together.” This fourth season of Arrested isn’t about interplay, about back-and-forth or clever pronunciations, about blue men or big yellow joints, although those do guest star. Each episode is its own character piece, each roughly 12 minutes longer than the economical 21-minute broadcasts of the first three seasons. Now there’s time to linger, and often the welcome is overstayed. 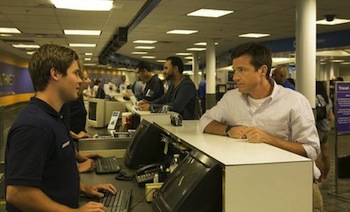 In 2001, The Simpsons made the As I Lay Dying formula (or Rashomon, if you prefer) a vessel for comedy in its 266th episode, “Trilogy of Error,” which follows Homer, Lisa, and Bart through one interconnected day from the perspective of each. Arrested Development, a show that is now widely attributed with the popularization of a host of signature techniques used in making modern sitcoms (for example, the brief flashbacks now seen in shows like How I Met Your Mother), borrowed The Simpsons’ bit for the format of the latest season.

Reportedly, the decision was a practical one. With a Bluth family cast that required returning actors to play the parts of George Sr., Lucille, Michael, Gob, Lindsey, Buster, Tobias, George Michael and Maeby (all of whom get at least one episode dedicated to them), not to mention the panoply of guest stars ranging from Henry Winkler to Terry Crews to Kristen Wiig to Ron Howard himself (you’re gonna get some hop-ons), assembling the on-screen personas all at once proved a scheduling impasse. While the cast managed to gather in small groups for half-scene shots, even these moments appear rarely, and mark the pacing for the season noticeably.

So instead of the degenerative forward motion through prison, house arrest, cycled loyalties and loosed seals from the first three seasons, the entire fourth season retreads the same five group events splayed across a few years and culminating with a riot at the annual Cinco de Cuatro fair. Outside of a family meeting here or an awards show there, most of the returning characters only interact with each other one-on-one.

This creates an immediate problem for the glue of the series’ comedy, which relies on frequent intersections of disparate ploys from Lindsey, Tobias, Michael and Gob all in the same episode. Like Seinfeld’s “golf ball in the blow hole,” or Arrested’s balls of mass destruction from Season 2, a good bit of the comedic lifting is done by the absurdity of the character plots affecting each other. In Season 4, only Tobias shows up for Gob’s wedding, and even then to act as a Roman centurion on TV (obviously). Gob’s episode begins and ends with Gob, except in the Lord’s tomb in a beekeeper’s hat. 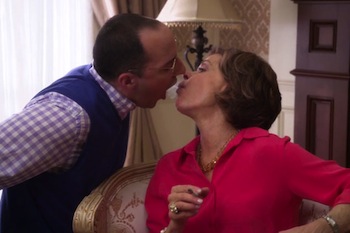 Although Hurwitz and the writers justify the fragmented plot pieces well (sometimes aloud to the camera in the case of Jeffrey Tambor’s playing Oscar and George Sr. in the same scene), Season 4 gives off the unmistakable stink of fan service. It’s almost as if each of these characters (or perhaps the actors who played them), immortalized by years of quotable meme-ification, felt entitled to a farewall volley, one last shot to prove their cult-hit status. David Cross’ Tobias breathes new gags into his pigeonholed character, while the others find new, still-funny ways to tread the same ground, usually in the form of sleeping with the wrong or same person.

Again, it’s worth noting that Season 4 of Arrested Development is still a much smarter, cleverer, savvier season of a sitcom than anything on primetime today. However, another side effect of the season’s Netflix funding is the relaxed storytelling parameters. That is, where the writers used to pack an entire, self-sufficient subplot into a 21-minute comedic sprint, the fourth season ambles through around nine sub-plots (one for each character with their own episode) in 32-minute jogs. Instead of building in extended, season-long running jokes (“Marry me!”) and episode-specific bits (“Portugal is due South, Michael”), almost every moment, comedic or otherwise, is carried by the preceding episodes in the fourth season.

Admirably, it never devolves into the kind of last-season navel-seduction that stains the final season of the American Office, but it doesn’t manage to pack more into the given time, either. A good example would be (spoiler alert) Michael’s voting out of George Michael’s dorm room, which is drawn out over several minutes depicting the conception of a voting plan, then the voting, then the actual silent eviction. The whole bit could have been done with one well-timed Peanuts music cutaway, and likely would have been done that way when the show had to fit into a much tighter schedule. Giving viewers more time to breathe during each scene may have been easier, but the overall effect is that the season suffers from a forget-me-now after the taut comedy of its previous seasons, and grows a little melancholy in the process. 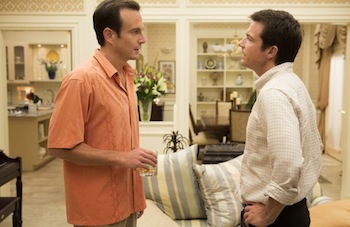 Even that melancholy seems to have a direction, though, as one of the themes of several of Season 4’s recurring jokes seems to be “To hell with corporate broadcasting!” Although just a seedling of an idea in Season 3 (which was itself cut by several episodes because of poor ratings), the “fight the TV man” concept got a full examination through the lifetime of 30 Rock which ran during the interim years when Arrested Development did not.

Picking up the freebie where Tina Fey left off, Hurwitz and team emblazon across every piece of footage from Season 1-3 “Showstealer Pro Trial Version” and frequently return to the malleable issue of “intellectual rights”, a subject dear to the creators’ hearts. Michael’s subplot even revolves around him getting the rights to the life stories from each of his family members, which ties in a fair amount of name-droppery, movie production company politics (real or Imagine), and Ron Howard narrating Ron Howard. While some of it remains a bit too insider for most viewers, the rest of it manages to still be dysfunctional enough to feel like the earlier seasons.

This all makes one wonder, why Season 4? If the history of television broadcasting has taught us anything, it’s to let sleeping frozen doves lie, right? When a show has reached the apex of its aplomb and presumed influence, the only way is down. But we must have known that going into this Netflix-made monster. It’s no money-grab, to be sure, and it certainly doesn’t pander, but Season 4 was logistically and almost proverbially unlucky from the outset. Some may find the minor departure a slight treason to the series’ tightly-packaged roots, but that’s the inevitable conclusion with a returning season sculpted by short cut-offs and the fear of disappointment.

30 rock, Arrested Development, as i lay dying, how i met your mother, rashomon, seinfeld, The Simpsons