As an introduction to the world of Harley Quinn, DC’s Harley Quinn #0 is not a good debut. Writers Amanda Conner and Jimmy Palmiotti utilize a self-aware narration, one where they communicate directly with Harley as she decides what her comic will be like and who will draw it. 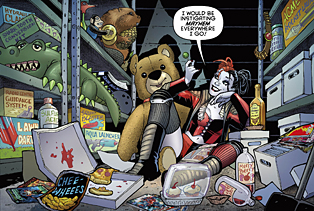 But the constant tongue-in-cheek conversation between the creators and the characters makes the comic a joke and therefore destroys any legitimate interest in the series. Basically, reading Harley Quinn is like reading Deadpool, except it’s not funny.

My point in reviewing the comic, though, was to showcase the diversity of art. Packed with 17 different artists, Harley Quinn #0 is visual candy. DC really displays the depth of their artistic talent with this issue, and while some of the art isn’t my style, the diversity of aesthetic is the most intriguing aspect of the issue.

The story is what really holds Harley Quinn back. Is it meant to be a comedy? Are we going to seriously explore Harley as a lead character? Should we even care? Unfortunately, nothing is established enough to answer any of these questions, and the final page is an eye-rollingly bad setup for the premise of the series.

It’s hard to get excited for the debut of this series based on what I’ve read, but I’ve been wrong before. Hopefully, this issue wasn’t a harbinger of the series but rather a lighthearted way to draw interest.

DC will have to wait and see if it works. 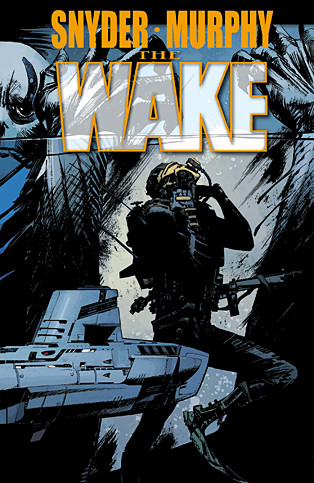 Thing are starting to make sense.

As The Wake moves farther away from its cryptic opening, the series is coming into focus and tying in its vague preludes with its scary main story and enigmatic epilogues. The resolution of this issue is particularly fascinating, as we’re going to see what happens when the creatures encountered by the underwater rig crew finally break the surface and attack Earth.

Snyder’s gripping narration falls a little flat in this issue, mostly in some of the traditional tropes into which it drifts. Characters have innocuous conversations that are so heavily planted that they take the mystery away. I feel like a lot of expository reveals occur, but only in ways to advance the plot rather than deepening the mythos.

But Snyder rallies toward the end of the issue when he delivers a terrifying and heartbreaking conclusion. Lee contacts her son Parker in what may be her final message, only to find out that the invasion of Earth has begun.

Enter Sean Murphy, whose set designs and shadows are superb in this issue. He communicates the scary and somber tone with aplomb, particularly Lee’s final scene with her son. His monsters are horrific and his characters sharp. Snyder’s a great writer, but having Sean Murphy in his corner makes the book fantastic in both its story and art.

I love The Wake. It’s a solidly-told story coupled with a visually stunning design. Snyder promises more excitement to come, and I can’t wait to see how he transitions from this issue to the next when part two of The Wake hits stores in February. Until then, we have to wait.

And hope that what Snyder dreamed of doesn’t really exist in the dark, cold waters of the world’s oceans. 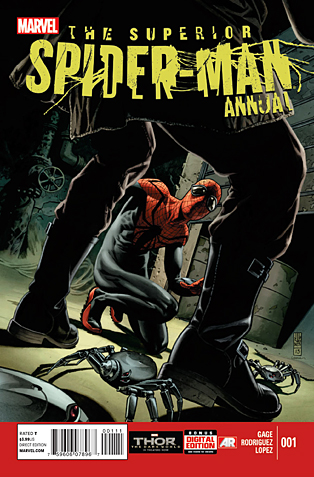 Bannen’s Book of the Week: Sometimes, I want Peter Parker to return. I miss his humor and humanity, and he really is the original Spider-Man.

But then I read an issue like this and find myself wanting more Otto Octavius. Christos Gage captures Ock’s brutality in new ways that that will make you feel disgusted and in awe of the guy at the same time.

The story follows Ock’s encounter with a villain known as Blackout. Personally, I’ve never heard of the guy, but Gage’s introduction shows how imposing a figure he is. Furthermore, Blackout’s plans could wreak havoc on Peter Parker’s immediate future – if Peter Parker was the man with whom Blackout deals.

Instead, Otto once again outsmarts the villain. But his own affection for Blackout’s victim causes Otto to do something that makes Spider-Man a force to be reckoned with and, by proxy, Peter Parker a man to avoid.

Gage’s story is tight, and despite the length of the issue, a quick read. Gage addresses the main conflict halfway through the issue, but the second half of the comic is as solid as the first. Spidey’s fight with Blackout will make you cringe, and the punishment he doles out on his foe is a sign of his unwillingness to go soft on his villains.

Plus, having Daredevil regular Javier Rodriguez on the art means that the visuals will be strong and engaging. The action scenes, in particular, are evidence of Rodriguez’s abilities as an artist. He brings Gage’s story to life – especially in the more harrowing moments.

Annuals can be hit or miss, but this one definitely is worth the buy. Plus, it ties nicely in with what’s already going on in Otto’s world, so readers may find themselves lost if they don’t get a chance to check this out.

If you’re a Superior Spider-Man fan, I think you’ll find this issue as entertaining as I did.