I am a Simpsons purist. Any episode beyond season nine fails to maintain the same irony, humor and presence of its predecessors. Around this time, David Cohen went off to form Futurama with Simpsons creator Matt Groening while notorious recluse (and show genius) John Swartzwelder stopped writing the majority of The Simpsons episodes.

Shows went from being about thematic reactions to world problems to situational comedies. Rather than a story about the influence of television on public perception (“Homer Badman”), episodes were more like “Homer gets a job as a _______ and hilarity ensues” (see most of everything in season 10 and on).

In Springfield is buried the dying ideal of small town life, a place where traditions are strongly guarded, family history trumps wealth or status, and neighbors can be seen waving to each other on tree-lined streets.

But I have always had a soft spot in my heart for my four-fingered friends. I have had my students quiz me on Simpsons trivia – not the questions regarding the number of spikes on Bart’s head, but questions like “How long was Lisa banned from the Springfield Historical Society?” and “What animal did Marge appear as in ‘Itchy, Scratchy and Marge’?” I’ve wowed them (or made them pity me) by the extent of my Simpsons knowledge. So when thinking about the role a city plays in one’s life, I think of no greater place to be than Springfield, the everytown of America — but the only one with its own gorge, nuclear power plant, lake, beach, national forest, universities, casino, desert and supervillain (Dr. Colossus).

The only way I could truly convey just how strong a connection I feel to Springfield is to list the five episodes that best give viewers a good look at the inner workings of America’s Scrod Basket.

The first real introduction of the pride Springfield has for its history, “The Telltale Head” is about how Bart cuts off the head of a statue of the town’s beloved founder, Jebediah Springfield. Bart’s vandalism, while almost getting him killed by an angry mob, ends up bringing the town closer together and gives them a greater appreciation for their heritage. The episode is also a great homage to the enduring traditions many small towns carry with them, more out of habit than anything else. 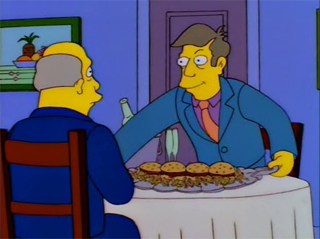 Every town has its personal pride and joy, and Springfield’s happens to be a lemon tree.  But when it’s stolen by rivals from Shelbyville, Springfield’s neighboring town, Bart, after having a sense of town pride instilled in him through Marge, sets out to retrieve the tree. Loaded with Bizzaro-Springfield characters, viewers get a good look at life outside the town, and they get to see what makes Springfield such a fine place to live. Writer Brent Forrester creates a palpable sense of oddity in the two towns and, while still humorous, the show sends a very poignant message about respect for the place you call home.

Easily Conan O’Brien’s greatest contribution to The Simpsons, “Marge vs. The Monorail” is the story of a slick-talking salesman named Lyle Lanley who gets the town to spend millions of dollars in fines (paid by Montgomery Burns) on a centralized mass transit system. Marge’s nagging skepticism turns out to be correct as Lanley’s creation is nothing but a poorly constructed machine meant to leave the town in ruins while he gets away with the money. While focused mostly on the family, it gives a broader sense of the way that townspeople can be duped, and how quickly they go for new and flashy rather than thinking through their plans. Too many small towns in America have dumped oodles of money into systems that don’t work, only to be stuck with the bill – and the cleanup – later on. Plus, you get to see Homer save the day with a donut. 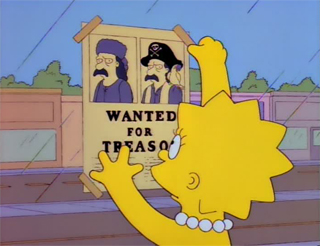 Besides introducing the words “embiggen” and “cromulent” to the English lexicon, no other episode gives a greater understanding of the town of Springfield than “Lisa the Iconoclast.” When Lisa discovers that town founder Jebediah Springfield was actually a murderous pirate named Hans Sprungfeld, she decides to share her revelation with the townspeople during the bicentennial celebration. But upon seeing how happy people are being blissfully unaware, she decides to keep the secret to herself, stating that the myth of Jebediah serves more good than the truth.

Of course there are others (“Whacking Day,” “Bart’s Comet,” “Bart’s Inner Child” and “Radioactive Man,” to name a few) that showcase Springfield at its most interesting, but if you’re looking for the best, I recommend those five.

While I’ve grown apart from the show, I still have a deep fondness for the older episodes. They’re still relevant, even though some of them are over 20 years old. The Simpson family may be functionally dysfunctional, and the town may be populated by greedy half-wits, but they seem to find ways to come together, to transcend gender and race, and to continuously deliver entertainment.

In Springfield is buried the dying ideal of small town life, a place where traditions are strongly guarded, family history trumps wealth or status, and neighbors can be seen waving to each other on tree-lined streets, or gathered up in front of the local store on Saturday morning, drinking coffee and discussing the news. No series greater captures that ideal than The Simpsons and, while small towns may be hard to find, you can always return to Springfield whenever you want.

As long as you aren’t from Shelbyville.

Brian Bannen can be found tweeting about other towns on Twitter @oaser.

A week in the city, Brian Bannen, Commentary, Springfield, The Simpsons