While other issues of Kick-Ass have begun with a brutal beating or some type of blood-spattered violence, issue #1 of volume three opens on a more subdued note. What Mark Millar really explores is the ennui and languor of the superhero circuit. This kind of exploration moves Kick-Ass into a whole different realm than its previous incarnations and makes for one of the best reads of the series so far. 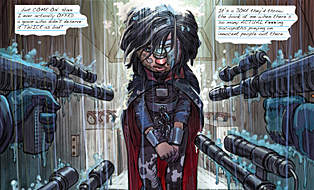 Millar approaches the stagnation of the superhero doldrums with humor, opting for a series of mildly comical vignettes that track Dave’s life as he settles into his persona as a hero, grieving for the loss of his parents, balancing his time between work and courageousness and trying to lead a group of people who are more interested in the idea of heroism than the actual act.

This writing is at times clever but other times frustrating. The linchpin of the series seems to be Hit-Girl, and with her locked away, Dave loses some of his edge. Millar breaks down the logistics of superheroics in a way that draws attention to the minutiae of the job. Just how does Spider-Man break into a sealed building? And how does Batman make his terrifying entrances? In Dave’s world, these are difficult questions, grounded in a reality that destroys the luster of the superhero life.

To this end, the comic is really not as flashy as the previous entries. Even John Romita Jr.’s finishes lack their usual sheen. Instead, the art seems to echo the general malaise of the situation. By the end of the issue, it’s clear that Dave is no hero, and that in order to become one, he has to make some significant life changes. He seems more in love with the idea of a superhero than the responsibilities.

Kick-Ass 3 has a promising start. The muted beginning only builds anticipation for the eventual action. The third act in any movie, book or play is where the conflicts converge, and I think we can assume the same of Kick-Ass 3. It may not have the same flash as Millar’s earlier work, but it’s some of his best. The character exploration adds layers to an otherwise action-heavy story, and I for one look forward to seeing how the series will play out.

Knowing Mark Millar’s usual M.O., we’ll see actions and explosions soon enough. Until then, this will have to whet our appetites for more. 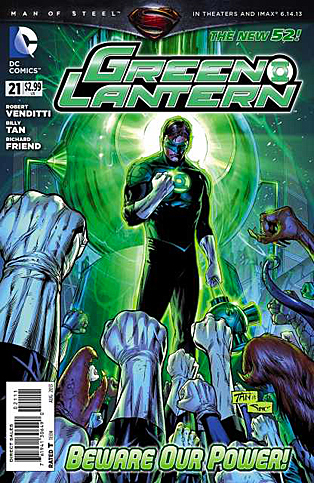 With Geoff Johns leaving Green Lantern after an historic run, fans could rightfully share their trepidation at the idea of a new writer. After all, Johns resurrected Green Lantern, created a detailed mythos, and pushed the character into the spotlight enough that Warner Brothers took a chance on a Green Lantern movie. So how would the new creative team fare against these odds?

Robert Venditti borrows from Geoff Johns in the grand scope of the storytelling, but he lays a foundation for the future of the series. He introduces some interesting and mysterious concepts, letting fans know that he’s not afraid to carve out his own niche in the Green Lantern universe.

The issue deals with Hal Jordan taking on a major leadership role. Due to his storied history, the New Guardians appoint Jordan as head of the Green Lantern Corps, a job that has its own myriad of challenges. But when a mysterious force shows up and drains the central power battery, the story takes an exciting and intriguing turn.

Venditti perfectly captures the basics of Hal Jordan: his tenacity to lead and his love for Carol Ferris. Venditti spends a lot of time on Hal’s relationship, and this focus gives readers hope that Hal will once again face threats on his home planet rather than gallivanting across the universe.

Venditti isn’t afraid to shy away from intergalactic threats, but he brings the series back to its earthly roots – more in dialogue than action – and hints at Hal being Earth’s Green Lantern rather than keeping him away for so long. Venditti still plays with the conflict of Hal’s duties to the Corps and his duties to his friends and family, but these conflicts – as simple as they seem – are more present than at any time in Johns’ work.

With the change in author also comes a change in artist. Billy Tan takes over for Doug Mahnke, but his work is just as impressive. He draws characters with detail, and illustrates sharp and skillful imagery. Richard Friend helps in this instance, providing taut inks à la Jim Lee to accentuate the sharpness of Tan’s art without losing the uniqueness of his style. A few of the distance shots are a bit blurry, but the rest of the book is magnificent, including the vibrancy of its colors.

If you were afraid the quality of Green Lantern would dip with Johns’ departure, fear not. Green Lantern is as good as ever, and Robert Venditti is a worthy successor to Geoff Johns. I only hope the series is as good from here on out. 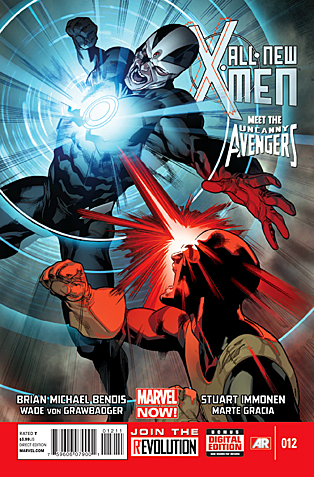 Bannen’s Book of the Week: Brian Michael Bendis is in a unique position, because the majority of events about which his characters talk in this month’s issue of All New X-Men are issues that he created. Therefore, he understands their lasting impact, and he explores this in issue #12 of All New X-Men. The result is a comic that retraces the origins of the X-Men, and one which reminds readers of the long and storied history of the series.

Part of what makes the issue work is Bendis’ character interactions. While Jean tries to reconcile the Scarlet Witch’s previous actions, Scott Summers and his brother have a nice brotherly chat that connects them before all of the current issues occurred. It’s both sweet and saddening, as we know that Scott is too far gone at this point to understand just how much he’s strayed from his humble beginnings.

The other thing Bendis does well is building the mystery. I was curious to see how long he could keep the series going before the concept got stagnant and the quality dipped. After two successful arcs, however, I don’t see that in the near future of All New X-Men. The series is well crafted and a smart exploration about a comic’s beginnings and endings. Clearly, Bendis wants us to see where the X-Men began and how far they’ve come in the past 50 years.

The comic is also quite packed, both in its story and dialogue. This type of writing creates a conundrum for the art team, because they have so much to accomplish in such a short amount of space. Perhaps because of all of this density, Stuart Immonen’s art is not as sharp as we’ve come to expect. Some of the later parts of the book are muddled and foggy-looking, possibly due to a printing mishap, but maybe because Immonen had to squeeze some of the more expository moments of the story into denser panels. Either way, the change is noticeable, yet not completely distracting. The lack of clarity, however, raises eyebrows for those of us familiar with Immonen’s usually crisp style.

Nonetheless, All New X-Men is an excellent read. The comic bridges years of continuity together to remind readers that the X-Men have quite a story to tell. And while the events of their lives were not always positive (hell, the majority of their lives is filled with conflict), it has defined who they are.

In a world where people are looking for heroes, they need look no further than comic books, for within are the people who overcome adversity by picking themselves up and dusting themselves off. If only we could have such courage in our daily lives.