I know Mark Millar said he intended to finish his genre-changing series, Kick-Ass, with a bang, but this issue is a jagged and uneven shifting of perspectives that fails to ramp up the urgency, even when it delivers some pretty cool moments.

For starters, the issue seems to focus on Mindy MacReady, and the time we spend with her sets the tone for the rest of the issue. Imagine a 12-year-old girl running a prison because the rest of the inmates are terrified of her. Millar gives us every reason we need to know that Mindy is dangerous, and the cool way she addresses her psychologist reminds us of this fact. 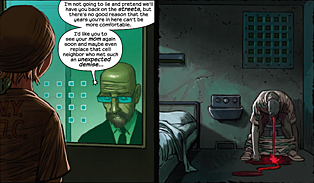 But Millar also wants to put in information about Christopher Genovese and Dave Lizewski, and here’s where the story starts to lose its flow. Millar shows us Christopher’s hero’s welcome back from prison, but he shifts too quickly back to Dave as Kick-Ass. Some of the sequences are not fully established before we move away to another scene. One sequence is so jarring that I thought I was missing a page from my comic. We get an odd arrival of a man in a dog costume, and then a bunch of gangsters show up, but the time between these moments does not play out smoothly, making reading the comic a bit confusing.

John Romita does what he can with Millar’s uneven script, and the action sequences are good because of him. Kick-Ass moves fluidly between enemies, and while Millar is big on reminding us that Dave is mortal, Romita shows us that regardless, he’s still a pretty adept fighter. Props to Tom Palmer for the sharpness of his finishes. The imagery comes alive due to the artistic teamwork.

Kick-Ass is known for its over-the-top violence and ultra-realistic setting. But this issue doesn’t combine these ideas well. Millar wants to keep us in the loop with all of his characters, but he doesn’t structure his story well. Instead, action happens rather randomly, and the story reads like a fractured narrative.

Luckily, John Romita gives us solid visuals. Otherwise, this comic is a disappointing entry into an otherwise fantastic series. 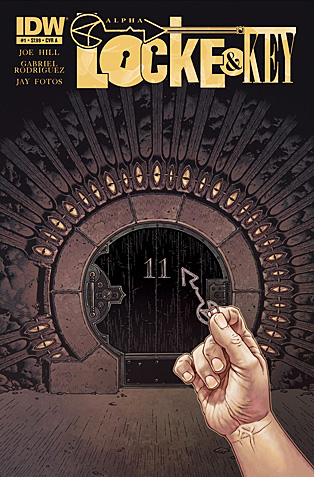 With only one issue left, Locke & Key is close to wrapping up its impressive run. I’ve enjoyed the series and its strikingly original concept, Joe Hill’s creative ideas and Gabriel Rodriguez’s always gorgeous art. In its penultimate issue, Locke & Key ties up a lot of its major threads well, if a bit unevenly.

With the hefty cover price of $7.99, Locke & Key: Alpha is an oversized bit of storytelling that feels a bit slow for its relation to its end. The first part of the comic is bogged down by narration and dialogue, much of which is important, but also a bit dense for a comic that’s supposed to be presenting its situation as dire.

The second half of the book is better, where Locke & Key’s real protagonist, the always resourceful son Tyler, shows off his ability to remain strong and outthink his opponents, no matter how imposing they are. Here, Hill does his best work, reminding readers of the emotional weight of the situation. He brings to a close years of storylines, but in a way that rewards long-time readers.

Gabriel Rodriguez is, as always, fantastic. Because the majority of the action takes place in the caves under Keyhouse, Rodriguez doesn’t get to do much with the setting, but his character designs are superb. With Jay Fotos providing the colorization, each visual is polished and lucid.

I’ve loved Locke & Key from its inception, and Joe Hill continues his tradition of delivering solid issues, even at the final run of his comic. While the extensive length of the comic tends to drag its story a bit, the tale being told is anything but boring. With only one issue left, Hill has a lot to do to wrap up his story and leave readers with a satisfactory ending.

But he’s proven his worth. I have no doubt the final issue of Locke & Key will be stellar. Hopefully, you’ve been keeping up. 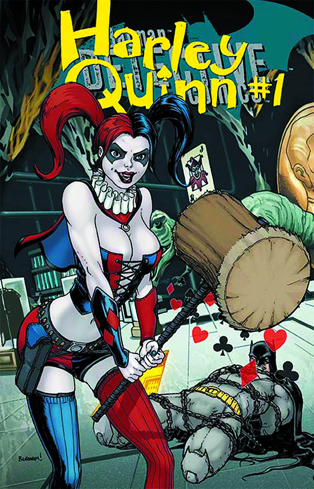 Bannen’s Book of the Week: Besides introducing the world to Kevin Conroy, arguably the best Batman voice ever, Batman: The Animated Series also introduced us to Harley Quinn, the Joker’s female sidekick. Now, DC is taking a look at Harley’s beginnings in a comic that is visually stunning and sharply written.

Harley’s origins skim the line between expected and original. Her upbringing is, not surprisingly, chaotic and violent. But where Matt Kindt shines is in how he shows Harley’s fixation with the psychopaths of Gotham and the one man who helps her define herself. The Joker’s role in the comic is small, which is good – it helps Harley have the space to herself. Rather than seem like a female knockoff, Harley is given a life of her own, and her twisted plans, revealed at the end of the comic, have their own individual flavor.

What works best is how Kindt shows Harley’s descent into insanity. As the comic progresses, Harley looks more and more maniacal, and her actions become more deadly and psychotic. But Kindt also balances the part of Harley that’s still human, so she’s not so far distanced from us. His humanization works because it doesn’t make Harley a pathetic character, but rather a more dangerous one. Her ability to straddle the line between her personality and the persona of Harley Quinn is impressive, and what she chooses to do when she crosses the line makes her character that much more deadly.

Neil Googe’s stylistic art draws inspiration from Harley’s cartoonish beginnings, but his character design is more aesthetically pleasing. He creates a world that’s a caricature of our own, but it provides a distance from Harley’s horrific crimes. Faces in particular benefit from Googe’s aesthetic. Harley’s maniacal smile is both humorous and terrifying, and with Will Quintana’s colors, the character is gorgeous and sleek. It’s hard to deny Harley’s sexiness with Googe and Quintana, even though she’s a deranged killer.

I loved this comic. Harley being give her own forum was one of DC’s best decisions, especially with how much they made the comic about her and not about her love of the Joker. We know she loves the guy – she’s crazy for him (no pun intended). But to see the impetus for her decisions – to know that buried under the runny makeup and garish colors lies a calculating and aware woman – makes the character all the more disturbing and powerful.

And if DC needs anything right now, it’s more strong female characters – even if they turn out to be insane.