I’m sure the subject of sex in Star Trek, particularly but not limited to The Next Generation, has been written about in a million thesis papers and in fanfic and possibly even here in the pages of Unwinnable.

I refuse to Google it, though, because I am the still the Rookie of the Year, after all, and I wouldn’t want research to get in the way of the wide-eyed innocence I know brings you all back to this column, month after month after month.

So let me begin with an assertion everybody knew before I discovered it when I recently stumbled into a binge-watch of season one: 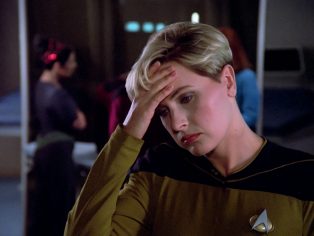 Exhibit A is First Officer William Thomas Riker. Riker is good-looking enough, and he’s clearly got it together. He wants to be a Starfleet captain and you can already see he’s built for it. So, sure, I could see how Deanna Troi (and her cleavage) could have some sort of still-simmering past with him. And I get that his authority and ambition inspires not only respect but some interstellar twitterpation. But he is clearly emitting pheromones we can’t detect through our TVs, because when he walks by, the uniforms practically melt off the female members of the crew.

To wit: Through just 10 of the 25 episodes in season one, the crew of the USS Enterprise has already:

Obviously Star Trek had long used space exploration to break taboos before, most famously Kirk and Uhura’s interracial kiss during the original run. But for broadcast TV in 1987, it seems fairly progressive in its attitudes, particularly when it comes to female sexuality. The ladies of the USS Enterprise – whether it’s Troi for Riker, Dr. Crusher for Picard or Yar for . . . anyone – want to get it on. Badly.

This makes sense for a group traveling through the void of space for days, weeks, months and years on end. But I started with the pilot and only got a few episodes past the ship’s, ahem, maiden voyage.