This column is a reprint from Unwinnable Monthly #91. If you like what you see, grab the magazine for less than ten dollars, or subscribe and get all future magazines for half price.

Ever wonder what the New York City MTA is doing when it shuts down a subway entrance for more than a year and a half?

I don’t give a fuck either!

About 21 months ago, signs were posted on the subway entrance I happen to use every day to get to and from work, announcing, effective September 8, 2015, that the northwest corner stairwell into the 57th & 7th station would be closed for construction – until the following September.

Crossing 57th Street, partly along a temporary pedestrian walkway, to the next-closest entrance, for 365 days – give or take – didn’t seem too daunting, but still I was a bit curious what difference a year of repairs would make to what seemed like an unspectacular, but perfectly adequate, subway entrance; caddy-corner to Carnegie Hall, it boasted classic lamp-lit metalwork on the outside, bricks along the walls of the stairwell and tiles inside with familiar quotations and other words of wisdom printed on them. If it ain’t broke, why fix it?

Asking myself that very question, I decided to seize the moment – and take a few “before” photos (above) while I still had the chance.

Flash forward approximately 10 months, through fall and winter and spring and much of a summer. In what I assumed could only be a sign of the MTA’s trademark efficiency, I was delighted when new signs appeared in July, announcing that the entrance was actually going to re-open early – on August 16, 2016. Two weeks ahead of schedule! 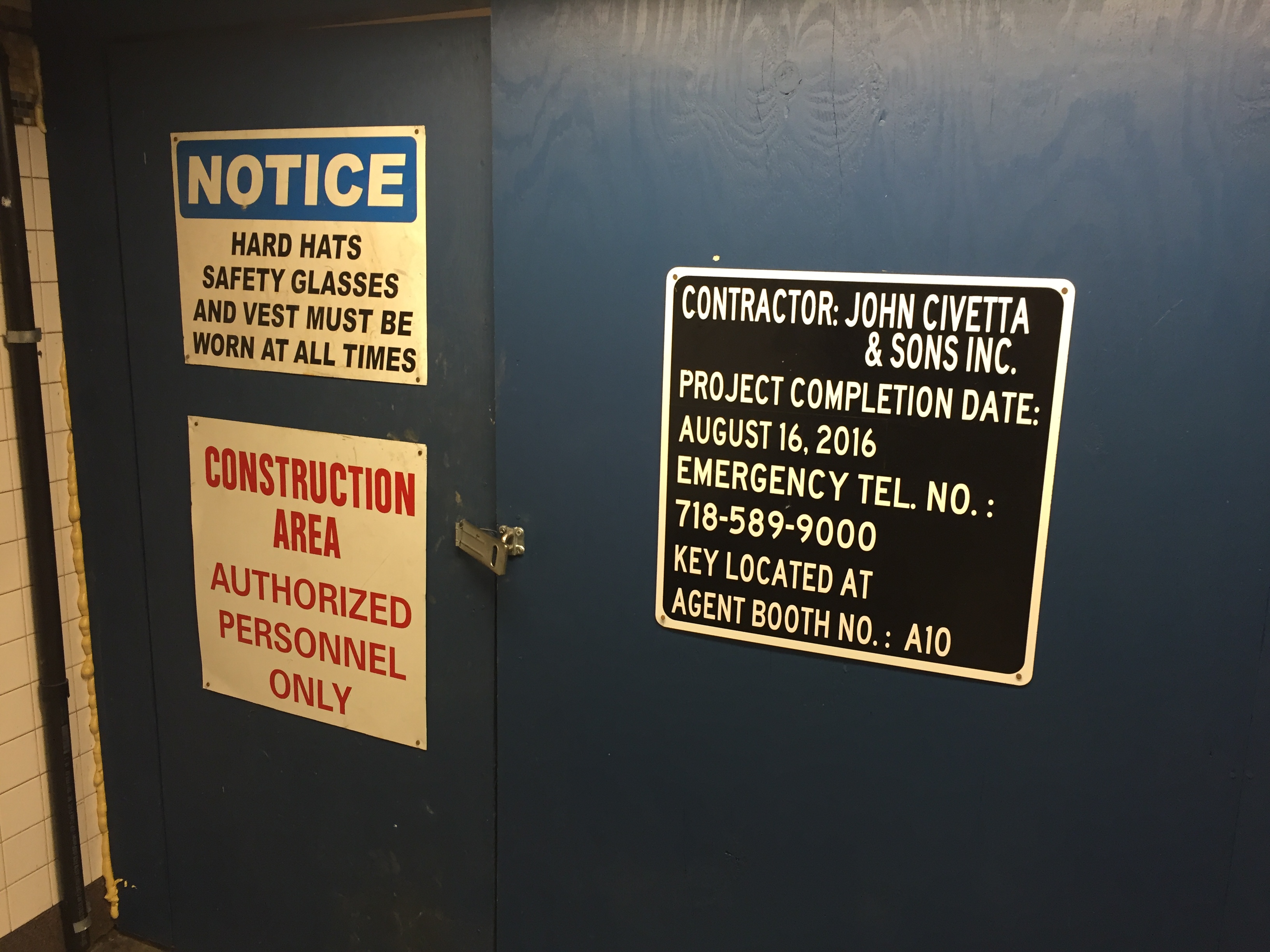 Of course, August 16, 2016, came and went, and the construction site remained in all its gaping-hole-in-the-sidewalk glory. Oh, the best laid plans of mice and MTA officials!

As the days passed, it became increasingly clear that the entrance wasn’t opening any time soon – the completion date had been replaced by a blank spot on the sign. A year? Yeah, right. The construction zone expanded and the pedestrian walkway tightened; there was even a day when it wasn’t raining but the path was inexplicably flooded. Then, on September 1, a week away from the entrance being closed for a full calendar year, I noticed something new: a fresh completion date! Posted on the wall, for all to see, was this: Nov. 30, 2016. So at that point it became official. The project was at least two months behind schedule.

I wondered: With Thanksgiving out, would we have our entrance back by Christmas, or would it be a second year with coal in our subway stockings? How long, then, until 2016 becomes 2017? Remember, it was 2015 when this started; why not wrap it up nicely during another odd-numbered year? 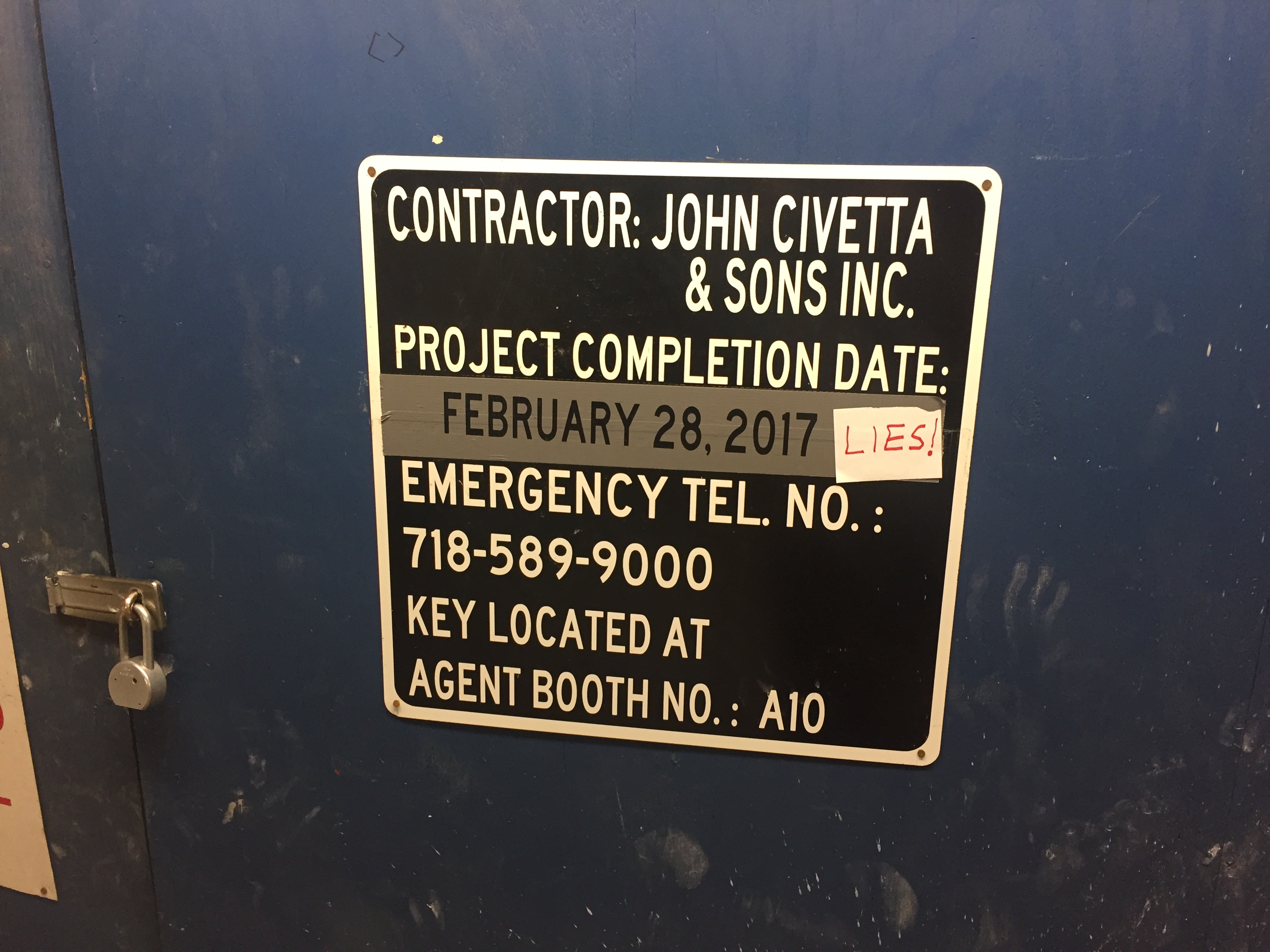 I could go on. More new dates. Revolt scribbled on the sign in the form of a single hand-written word, “LIES!” And then, one day early last month, it was open.

I walked home that day and called up the “before” photos I had taken on my iPhone, back when my now nearly two-year-old son was an infant, and wondered how different the new entrance really was. How would it compare to the old? Would I even be able to take the “after” photos from the same angles?

As it turns out? Not a problem. The new entrance is wider. Up-and-down stairwells instead of a single lane.

And that’s it. Still the same brick walls and the quotes on the tiles. Even the second set of stairs, lower down the station, are exactly the same. 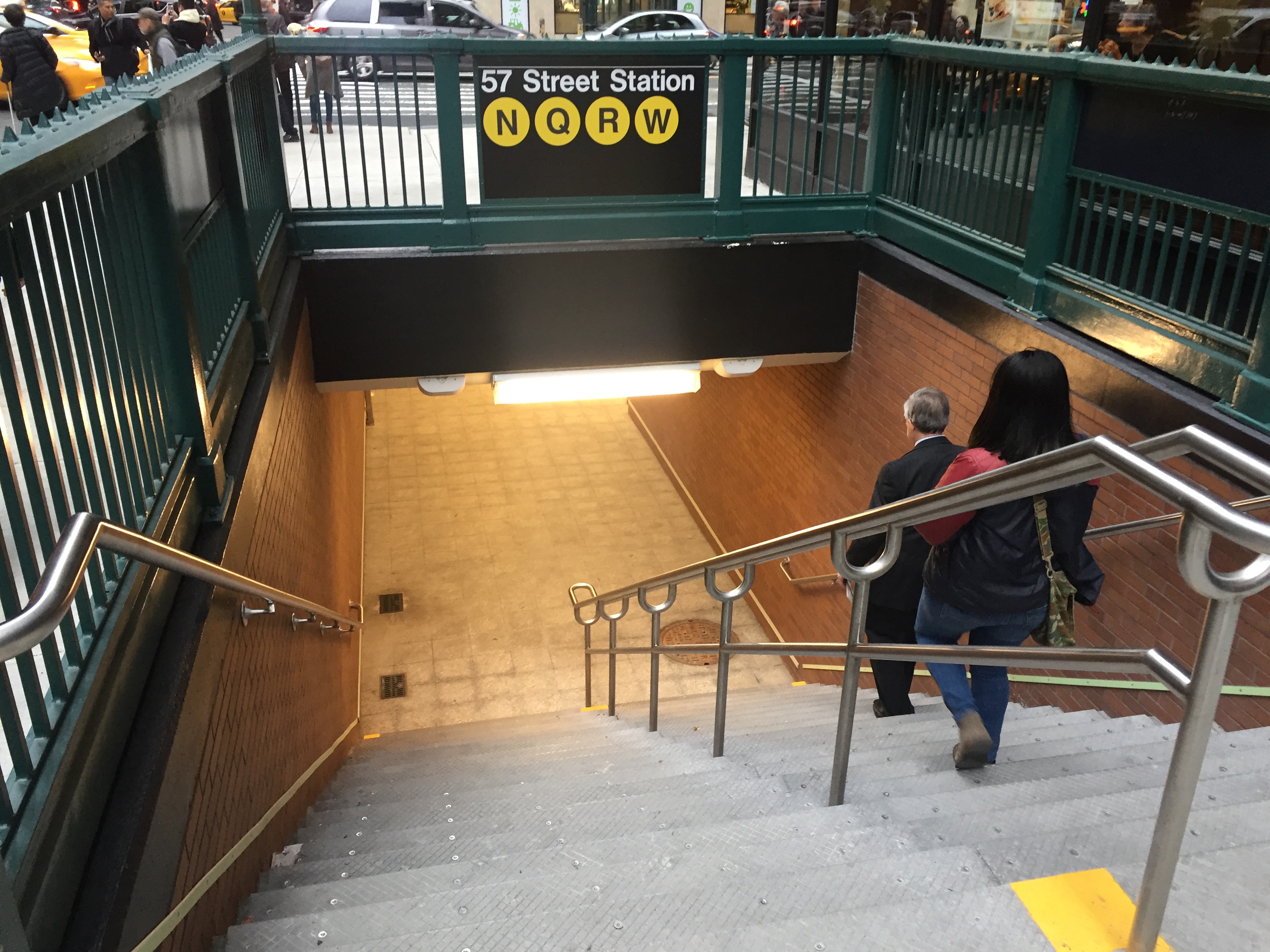 Were the changes made more structural, unseen, part of the addition of the W line and the rerouting of the Q? Sure, why not?

The name and number of the contractor has been posted there since Day 1. It’s been right in my face – and in my photos all along.

Nearly two years ago, I figured if my subway entrance looked mostly the same when it was done, I’d give them a call and ask why.

It’d make for an interesting story, I thought.

But after writing and rewriting the top of this story again and again since the summer of 2015, I find myself, now, in the spring of 2017 – and, like I said, I just don’t give a fuck anymore.