Both legends made headline-grabbing surprise appearances. And both were magical, particularly Dolly. But what you probably didn’t hear about – and what for me was the defining moment of the best three days of the year this side of Christmas – happened without as much fanfare and without any microphones, on a picnic bench far away from the main stage.

This was my seventh Newport Folk Festival. Each year, a theme emerges. You can read about many of those themes in the virtual pages of Unwinnable Monthly, and Unwinnable Weekly before that, and of course at Unwinnable.com. I write about the Fest nearly every year around this time because, as I said, it’s basically magic.

If you were ready to bolt at a moment’s notice, and followed the Fest’s alerts religiously, you won Newport this year. You saw The Ballroom Thieves at the Foundation Tent, three voices harmonizing to a lone acoustic guitar while clapping out the beat. You saw Lake Street Dive show up there, too, lead singer Rachel Price’s powerful voice content to linger in the background as four young girls from a Massachusetts music academy stood front and center. And maybe you saw Jade Bird outside the Bose booth, singing a song, “Lottery,” from her debut album, one we’d been playing in our car for months; afterward, though, you didn’t snag a selfie with her, because only one person did that and it was me. These moments? Amazing, thrilling, electric and, to use this word for the penultimate time in this column, magical.

But better than any of them, if you were patient enough to stick around for it, was what happened at the picnic bench in the Quad. 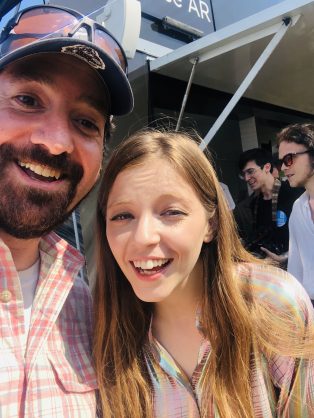 The alert went out on Friday: Caamp was playing a surprise set that night at the tiny Museum Stage, to celebrate that day’s release of their new record, and free tickets would be distributed, first-come, first-served, at the picnic area across from the Quad Stage. If you read this column regularly, you know what Caamp’s last record means to me. I got there as fast as I could. In a rare Fest misstep, however, there was confusion and chaos as a mass of fans jockeyed for position, not knowing where exactly to go, twisting and turning until a woman emerged from the crowd, held up her arm and handed out a precious few tickets in tiny brown envelopes. Almost no one got one. I didn’t either.

Many of us were bummed, not just at missing out on the tickets, but disappointed at how poorly it had been handled. Some of us hung around a bit longer, too, hoping for something to happen, as if more envelopes simply would appear out of thin air. We got a few Caamp stickers and a 10% discount code for the band’s web-shop instead. It sorta sucked.

When the last of us had started to wander away, I got a text from my friend Hannah. “He’s playing right now. At the same place.”

I turned back. Caamp’s lead singer, Taylor Meier, had stood up on the nearest bench, guitar in hand. Holding a banjo on the grass beside him was band co-founder, Evan Westfall, and bass player, Matt Vinson, sans bass. They began to play.

I’d find out later, talking to their manager, who was standing about 100 feet away, that they’d seen how it had played out and saw an opportunity to make things right.

They did. Caamp played three songs, two of their own with a cover of The Head and the Heart’s “Lost In My Mind” sandwiched in-between, which I videotaped and tweeted out breathlessly. Under a cloudless summer sky, we all sang the words together and you could feel the spirit of community in the air as dozens of fans crowed along with Caamp:

It was Day 1, and for me at least the first pop-up show of the Fest. I didn’t know then that more were to come. That it would help set the tone for the entire weekend. But as I hooted along, I knew this:

In its 60th year, the Newport Folk Festival was as alive and, here’s that word just one more time, as magical as ever.