You know that moment when you finish a book, close the cover and stare wistfully into the distance for a couple of minutes? I like that moment. That moment’s important. Those quiet, contemplative seconds give you time to reflect on what’s just happened. If as soon as you finished 1984 there was some twerp waving Catch 22 in your face, you’d never have the time to appreciate anything. You need a chance to think.

Same goes for videogames. Generally, they don’t accommodate this kind of mental rest – as soon as you finish one massive firefight in Call of Duty, you’re thrust directly into another. But in some games, like Skyrim, Fallout and other free-roamers, you’re given the space to have some downtime. I like this a lot. I think it makes the action better. 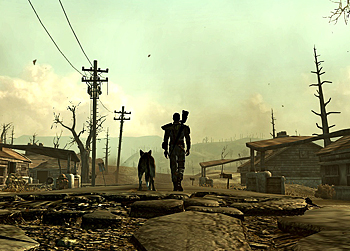 How much more satisfying is killing a dragon when afterwards you can dump your pack at the local inn and sit down for a well-earned ale? How much scarier is the Capital Wasteland when contrasted with the sleepy town of Megaton? Inhabiting this kind of negative space – resting in games – helps contextualize and heighten the action. When you have something to go home to, a pleasant little township like Whiterun for example, the battles seem all the more urgent. There’s something at stake here. If you die, you’ll never see your home again, never have the chance to rest your feet up and slurp some broth while reading a spellbook.

Whiterun is definitely my favorite. In a clinical gameplay sense, Whiterun is my base of operations: I can use it to store used items, pawn off things I’ve found and buy new weapons. But I can also spend time wandering the market, drinking at the tavern and cooking up meals in my house. These actions serve no real gameplay purpose. They don’t increase my stats in any significant way; rather than advance my progress, perambulating round the town actually delays the start of the next quest.

But it nevertheless feels like an important part of the game’s drama. If you’re not in love with the world, why would you care that Alduin is planning to destroy it?

Action scenes and fights don’t make you empathetic towards Skyrim – when 20 bandits are shooting arrows into your legs, it’s hard to feel like the world is worth defending. But your downtime in places like Whiterun and Solitude creates an attachment between you and the fictional society. It gives you a moment to pause and appreciate Bethesda’s design.

Just stop and look at Skyrim. It’s beautiful. It’s magnificent. But this level of splendor is hard to appreciate when you’re rushing through fight scenes – you need that time between quests to sit down and inhale the world. Same goes for Fallout 3. Just look at it! Giving context to the story is one thing, but stopping to – literally in Skyrim‘s case – smell the roses is at the core of games like these.

If only Grand Theft Auto IV were the same. I bring it up now as contrast to Skyrim and Fallout: It’s a free-roaming game, set in an extraordinary fictional world, that doesn’t encourage you to stop and look around. I love it still, but it’s missing some tiny details.

I wish you could sit down in restaurants. I wish that, when Niko was getting into bed, he would change out of his clothes and get under the covers. These are tiny, purely aesthetic changes, but they would make so much difference.

I like to method act when I play Grand Theft Auto IV. I try to get inside Niko’s head and keep his characterization together by doing as he would do.

But when I arrive at a restaurant and can’t use the chairs, it feels artificial. I can’t touch the game world. I can’t reach into and inhabit this place, and my sense of being there, of caring about it, is spoiled.

Worse than that, Grand Theft Auto IV appropriates rest into a gameplay mechanic. Visiting friends, going on dates, getting something to eat and sleeping all provide gameplay benefits: Firm friends and girlfriends do favors, like giving you free guns; eating and sleeping refill your health.

This is a limited view of what rest in games should be. Rather than inviting us to use Niko’s house or the restaurants as a place to hang out, we’re encouraged to see them as filling stations, as pit stops, as places to go when you need to get supplies for your missions. 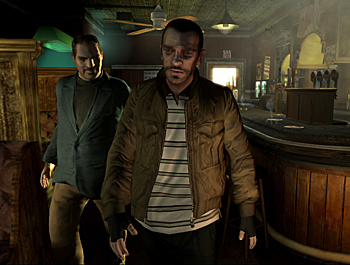 They have no other purpose. I like that you can watch TV in your bedroom and that it doesn’t do anything for your health or weaponry, but I wish you could just sit and chill in a diner sometimes, that you weren’t only visiting these places because you needed to obtain a functional item.

That goes double for your in-game friends. Once you’re aware of the gameplay bonuses close friends provide, you can’t help but treat getting to know people as like another mission. Hanging out with friends becomes a chore. Forming a close bond with them becomes just another thing on your long, dispassionate list of things to do.

You shouldn’t be participating in restful activities in order to progress, in order to advance your story or character. These moments are supposed to be your offline time, when you can just take the world at face value and maybe forget it’s all part of a videogame. By appropriating rest into a gameplay conceit, Grand Theft Auto IV takes all the splendor out of it. It becomes just another mechanic.

Ideally, rest involves ridding players of their gameplay responsibilities. It means providing them with areas or interactions that, primarily, are visually or emotionally pleasing as opposed to action packed. To properly rest, you need to be able to touch the world, to do things with it that aren’t oriented around action or violence.

Niko Bellic can buy guns but he can’t talk to the wholesaler. He can buy a burger to recharge his health, but he gobbles it down in seconds, and he can’t use anything else in the restaurant. Instead of emotional or intellectual feedback, the interactions you have through him are oriented towards tangible gameplay benefits. Compared to the player characters in Skyrim and Fallout, he’s a man who can never rest.