My childhood dreams were notoriously vivid experiences. They often had elaborate storylines and colorful visuals which for some reason remain with me to this day.

So has my very first nightmare.

I’ve never had many. In fact I can only think of a handful. But that first one has always stuck with me, perhaps because it plays out like an 1980s slasher flick.

The voice comes through the speakers like a cop delivering an all points bulletin in a ‘50s B-movie.

It always starts out the same. I’m in the passenger seat of an old convertible. I like to think of it as a 1957 Ford Fairlane, but it’s really more like a 1971 Monte Carlo. It’s got a powder blue shell with a clean, white leather interior.

My brother is in the backseat, along with a buddy of mine. I know him in my dream to be a buddy, but he was a different person every time.

Driving the car is my babysitter. I had several of those over the years, too, but this one is always some beautiful blonde with wavy early 1980s hair. (No, she never actually existed.) 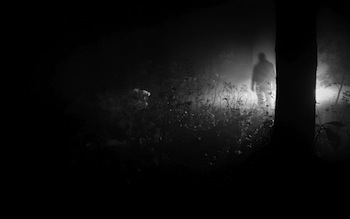 We’re tooling around my neighborhood when an announcement comes in through the radio. It warns of a killer on the loose. The voice comes through the speakers like a cop delivering an all points bulletin in a ‘50s B-movie.

Then we see him.

In the dream he always starts off in the distance. It’s hard to make out any features. He just manifests himself as this dark figure. His body shape is similar to Michael Myers or Jason, but there’s no mask. Just blackness.

We speed away in terror.

The dream then shifts. The car, the girl, my backseat comrades all disappear. I’m on the sidewalk, walking fast and panting with exhaustion. Just a little kid with bright blonde hair running down the street. In one variation I’m actually on a skateboard.

I come to the laundromat that was down the street from my childhood home. I race inside, hoping to find some sanctuary. 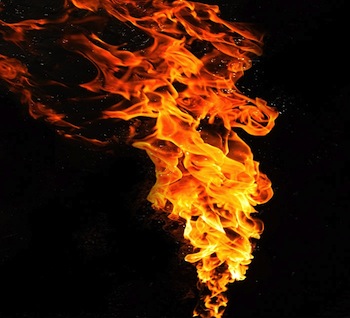 Instead I run right into the lion’s den.

The black figure is there. He’s captured a dozen other children, all screaming in terror and begging for help. Over the years I had the dream the other children were different people. Always an assortment of friends both past and present.

The floor is opened up into a swirling vortex of flames tunneling down into the depths of hell. Echoing screams emanate from within it. The black figure remains a shadow, absorbing the ligt instead of reflecting it. His face is just a dark hole.

The figure grabs one child and throws it into the vortex. He then snatches up another, and another. I want to help them, but I can’t.

Before I know it his “hands” are on me. I’m lifted over his head and feel myself fly through the air.

Then I wake up.

Stop and Smell the Roses