At the end of Watchmen, Alan Moore offered one of the greatest climactic moments of comic history, specifically when Adrian Veidt said, “I did it thirty-five minutes ago.”

Brian Azzarello attempts the same twist, but without the same impact.

Before we read Before Watchmen: Comedian, we knew Edward Blake was an apathetic, self-righteous man whose black-and-white view of the world ran contrary to the gray nature of humanity. (That is, save for Rorschach who, in an odd way, shared a similar view on the dark and haunted nature of mankind.) And after reading Before Watchmen: Comedian, we see Edward Blake as a man whose black-and-white worldview runs contrary to the gray nature of humanity. 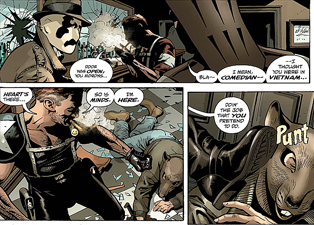 In other words, the path we’ve seen Comedian tread is nothing new.

Disappointingly, Brian Azzarello offered a different view to the harried hero when he posited the idea that Blake was not behind the assassination of John F. Kennedy. In fact, Kennedy’s assassination had such an impact on Blake that he carried the loss of his friend through the entire series. The change is explained in an offhanded manner, given no more than a line of dialogue as a punctuation for an odd change of history.

So why the sudden change of heart? Why does Blake turn against the men who have defined and supported him? Azzarello offers no answers save for a bleak impetus predicated on keeping a lie safe, much like the original Watchmen. But Blake’s immorality and amorality are nothing new, so the final page doesn’t come as any shocker. Even when Blake tries to flagellate himself in the name of his crime, the act comes off as mystifying, completely in opposition to his standards and morals.

The only positive is J.G. Jones, who finally seems to have nailed the visuals after six issues. Panels are clearly illustrated, and where the initial art of the series made historical figures look anything but lifelike, the final pages are a testament to Jones’ ability to craft photorealistic imagery.

At the end of its run, Before Watchmen: Comedian is a poor entry into a mediocre series. In Watchmen, Blake was berated by Laurie for raping her mother. Blake’s response was, “Only once.”

We can only hope DC has the same response when asked about more Watchmen titles. 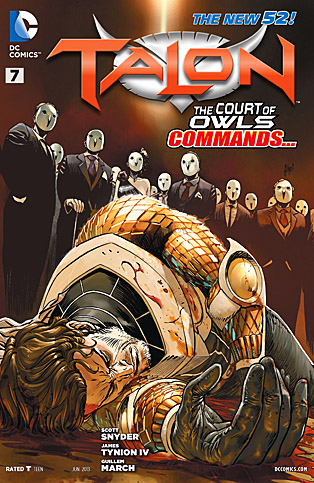 In the previous issue of Talon, Snyder and Tynion delivered a bomb when they revealed the secret history of Sebastian Clark and the role he’s played in Calvin Rose’s life. In this issue, the writers amp up the danger, as Calvin not only has to deal with the repercussions of that knowledge, but the fallout and how it involves the remaining Talons.

For starters, this issue is a much better view of the partnership between Calvin and Casey. Up to this point, Casey Washington has been a bit player in Calvin’s life, but the vitality of her role really comes through in her resourcefulness and her intelligence. If you thought she was nothing more than a romantic foil for the lead, you’ll learn just how important she is to the overall story.

But I have to fault DC for its splash covers, because the addition of Bane would have been better served had it not been revealed on the front page. Except for this minor hiccup, Talon offers readers a strong and action-heavy tale complete with a powerful climax that will definitely draw readers back next month.

And Guillem March’s work is only getting better with every issue. The art is rendered with impeccable clarity, so much so that Batman’s appearance is reminiscent of the Chuck Dixon/Graham Nolan era of the late 1990s. March knows when to turn on the grit to give Batman his usual imposing personality, but where I was most impressed was in the Casey Washington drawings. Through March’s strong and sharp pencils, Casey is brought to life in such a way that she exudes power, much more than is expected by readers.

Talon has established itself, with aplomb, in the Batman universe. Calvin Rose is a great lead, and the series has plenty of twists up its sleeve, enough so that readers will be happy to return each month for the next round. And with Snyder and Tynion on the writing duties, readers can feel confident in spending the money on a book whose worth will be more than evident by the final page. 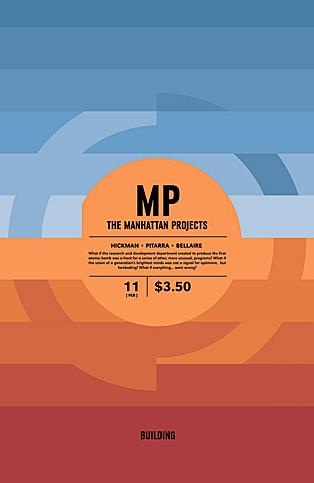 Bannen’s Book of the Week: Newer books have a tendency to fall flat after their initial arc. The story becomes stale, and the writer clearly reveals his or her inadequacies with an ongoing series. Luckily, Manhattan Projects is not such a book. After several mediocre entries into its catalogue, the series returns to form with a powerful, well-crafted issue that goes beyond the established duality of its characters to deliver an unexpected twist into an already twisted world.

For starters, Hickman spends the issue humanizing Yuri Gagarin and Harry Daghlian, the talking skeletal frame seen since the beginning. The comic is more about the relationship between the two friends rather than reminding readers that one more character in this universe is not who he says he is. Hickman gives readers a cool twist in the climax, but he spends the majority of the issue on the relationship so that the ending is not so much shocking as touching, and a reminder of the friendships we form and the lengths to which we go to keep them healthy.

Additionally, the plot doesn’t move much farther forward. If you want a story of super geniuses discussing super-intelligent ideas, this comic is for you. But if you’re looking for a smooth entry into the series, you’ll find yourself lost. Clearly, Hickman is writing for an audience who’s stuck with him, and we’re rewarded with some impressive revelations.

And Nick Pitarra’s art has never looked finer. From its simple opening design of a chocolate sundae to the final shot of the Earth from the moon, every panel is drawn with impressive detail, sharp inking and a color scheme that goes far in bringing the images to life. I cannot praise the artistic team enough in this issue, for a multitude of reasons.

Look, if you’re not reading Manhattan Projects already, you’re missing out. Jonathan Hickman has crafted one of the most original worlds in comic history, and Nick Pitarra has brought it to life. If you’re tired of the same old major publisher stories, give Manhattan Projects a try.

I don’t think you’ll be disappointed.