Revelations is a slick mystery about a Scotland Yard detective who, under the direction of his brother – a Cardinal assigned to the Vatican – travels to Rome to solve a mystery involving the next pontiff, who is found dead, impaled on the spikes of a metal gate. 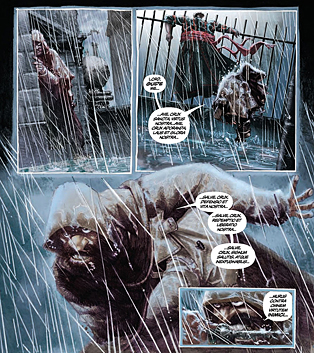 Charlie Northern, the protagonist of this tale, is a cynical, sarcastic, chain-smoking curmudgeon. He’s personally connected to the murdered cardinal, a man named William Richleau, but Charlie’s involvement is not totally defined. Paul Jenkins definitely wants to establish Charlie as a hardboiled detective, the kind of man who solves crimes in his sleep.

To transmit this characterization, Jenkins relies on defining Charlie by what he isn’t: an Italian police officer. Jenkins lampoons the Italian detectives in the issue to the point that their one-dimensional buffoonery is stretched a bit thin for believability. They don’t set up a crime scene, take good crime scene photos, interview witnesses or do anything to build a case to achieve justice for the fallen cardinal.

Jenkins may take this approach for two reasons: first, to show the lack of jurisdiction the Italian police have in the Vatican (it is its own country), or to show that the conspiracy is much deeper and that the Italian police are in on the murder. Regardless, Charlie reads like a Constantine copy rather than a defined character of his own.

Humberto Ramos, an artist I know for his work on Amazing Spider-Man, controls the imagery of the comic. Some of the rain-heavy shots are almost washouts, (no pun intended) due to Ramos’ aesthetic, a cartoonish mix of pastel-like designs and pencil-like cross hatching. But really, only the introduction is muddled. The rest of the book is a visual treat, due in part to colors by Leonardo Olea and Edgar Delgado. The mysterious tone of the issue is transmitted through the visuals, and while the characters derail the detective story, the images bring it right back each time, capturing the suspenseful tension of each panel and page.

I’d be interested to see how Revelations solves its big mystery, because I like the concept of the comic, even if the delivery falls a little flat by relying on too many detective novel tropes. Visually, the book is perfect – a fine mix of artistic stylings. The story gets off to a rocky start, but I wouldn’t say this is reason enough to dismiss Revelations. From what I see in Paul Jenkins’ introductory issue, there’s a lot more to come from this story. 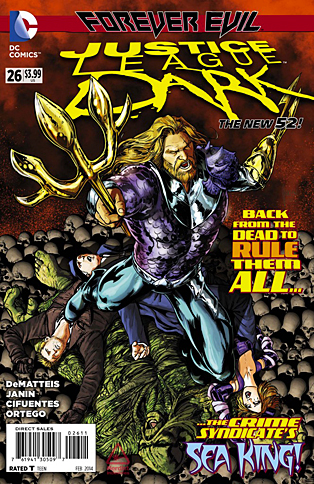 Like a lot of people, I was a bit disappointed to see the hook-handed Aquaman appear and disappear so quickly in the pages of Forever Evil. People still talk about what a debacle that incarnation of Arthur Curry was, but if anyone could make that character work, it would have to be Geoff Johns.

So imagine my excitement when I saw him on the cover of Justice League Dark!

First, though, someone has to give Mikel Janin an award. His art is gorgeous, and the issue is absolutely beautiful because of his lush, detailed illustrations. I love each and every page of this comic. It has a realistic tone like the work of Gary Frank (whom I love), but without straying into photorealism, like the art of the talented Greg Land.

As for the story? J. M. DeMatteis finds a rhythm in this issue, solving the climax of the previous issue and setting up the story for the future, including introducing a very important concept around Aquaman from the Crime Syndicate. It’s actually a brilliant solution to how the heroes can defeat the villains over in the pages of Forever Evil, but we’ll have to see how the two come together.

Considering the amount of characters in the story, DeMatteis balances his cast nicely, giving equal weight to all of his players without making the comic feel bloated. If anything, DeMatteis finds a way to balance his action and story well, without ever losing the thread of this tale.

Justice League Dark is a series that should be on everyone’s radar. It’s a great mix of odd heroes with odd powers – people who operate outside the accepted norm yet compete on the same level as any of the big-named superheroes. And this issue is more proof of that. Plus, given the shocker on the final page, I think Justice League Dark has set itself up nicely for repeat viewings.

The Superior Foes of Spider-Man #7 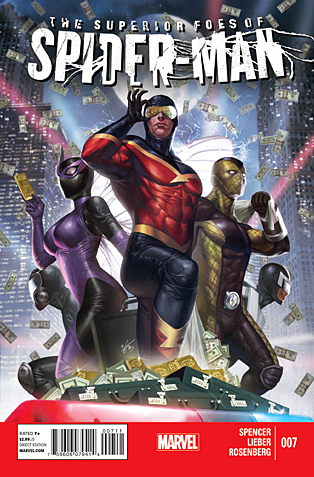 Bannen’s Book of the Week: This is, without a doubt, one of the best comics I’ve ever read.

Nick Spencer combines clever, punchy writing with wit and humor to tell the origin of the new Beetle who, from a very early age, was destined to be a great criminal. Being the daughter of Tombstone may have played a part as well.

Spencer’s humorous story construction is akin to Matt Fraction’s in Hawkeye. There’s quick back-and-forth banter, sharp dialogue and a fractured take on the usual family dynamic. Instead of asking for a car as a graduation present, Janice asks her father to fund her super-villain career.

And it’s best to approach The Superior Foes of Spider-Man with this kind of sardonic mindset. The high point of the comic is when Janice has to arbitrate a conflict between the Fixer and Baron Zemo. Regardless of the silliness of the encounter, Spencer is able to explore the minutiae of being a villain. What kind of conflicts (other than fighting superheroes) do they encounter? Apparently, they squabble like children over broken promises and past team-ups.

Similarly to Hawkeye, Superior Foes of Spider-Man has an attuned eye to capture and deliver the humor while still keeping the story solidly structured and easily readable. Rich Ellis does a fantastic job of walking us through Janice’s life on her path to becoming Beetle. One splash page in particular gives us insight into Janice’s daily regiment, and it made this reviewer laugh out loud.

Ellis’ eye for pacing is good, and his transmission of story solid. The comic has a lot of muted tones in its visuals, so the lack of ornateness keeps the visuals from distracting from what is really a great, well-told story.

This kind of unique introspection is fun to see. It catches the readers off guard and delivers something new, something they may not have seen before. In an industry dominated by superhero comics, it’s entertaining to see what the bad guys are up to.

Luckily for us, the results are hilarious.