Hello, Dear Reader. Ian Gonzales here, filling in for Brian Bannen. It was a pretty great week for comics. So great, in fact, that I had a hard time figuring out what my “Book of the Week” would be. So, I cheated – I have three.

Set in the early 18th century, 47 Ronin is the story of masterless samurai avenging their fallen master’s honor. It adapts the Japanese legend of the same name. The first issue depicts the events that lead to Lord Asano Naganori’s (the daimyo of Ak&#333 Domain) fall at the Shogun’s palace. Issue one shows the corrupt court instructor, Kira, continually insulting Lord Asano and Asano’s inevitable assault on Kira. 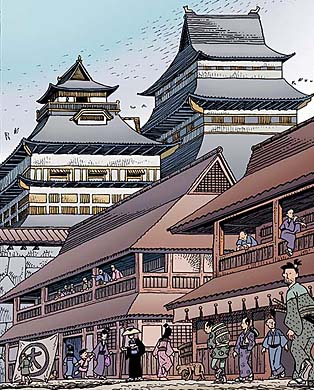 Mike Richardson has been trying to get this comic made for a long time. As is quoted in the issue, “to know this story is to know Japan,” and Mike Richardson and Stan Sakai deliver on the scope of this story, even though this issue is mostly setup.

The book opens with Asano at his home in rural Japan. He walks among the cherry blossoms with his daughter and converses with his wife and loyal retainers. He’s an amicable man – a good father and husband who treats his subordinates with the greatest of respect. Richardson and Sakai spend the first issue showing what kind of man Asano is and just why his samurai would avenge his honor. It’s a risky first issue, but it works.

Stan Sakai’s work is, as always, masterful. He transports the reader to the dawn of the 18th century in Japan. The insides and outsides of the Asanos’ home as well as the Shogun’s palace are like a window to another time. Asano’s home is spacious and naturally beautiful, but when we move to Edo, the backgrounds are more complex and the panels have a much tighter feel to them, conveying the political complexities that Asano had no interest in (which ultimately lead to his downfall).

This is the first issue of a five-issue mini-series. Richardson and Sakai are doing a tremendous amount of worldbuilding in this issue. If they keep this level of quality up, Dark Horse’s 47 Ronin may be one of the finest retellings of the tale of the loyal retainers.

Danger Club Vol. 1: Death, collects Danger Club’s first four issues. I can’t say enough good things about this comic. Landry Walker and Eric Jones have built an entire world and cast of characters that are simultaneously fresh and familiar. Analogues of familiar teen sidekicks and superheroes, the cast of Danger Club exists in a world where all the superheroes and a lot of the supervillains are gone – presumably dead after an encounter with an evil alien force in outer space. The truth, while not entirely revealed, is looking to be far more sinister and earthbound.

Kid Vigilante, the main character of the series, is sort of a boy wonder. The last surviving sidekick of an urban vigilante, he is rounding up the surviving teen sidekicks to save the world from the mysterious threat that may actually be not from the stars above, but from the world’s first superhero and current President of the Global United States.

My first exposure to Mr. Walker and Mr. Jones’ work was in Supergirl: Cosmic Adventures in the 8th Grade (arguably, the best Supergirl comic book in the past 30 years). Danger Club is a far cry from that book but it is no less entertaining. As sweet and sincere as Supergirl was, Danger Club is visceral and brutal, but it maintains the same level of sincerity. These gents are having a blast telling this gruesome superhero tale, and it shows in every blood-soaked panel. 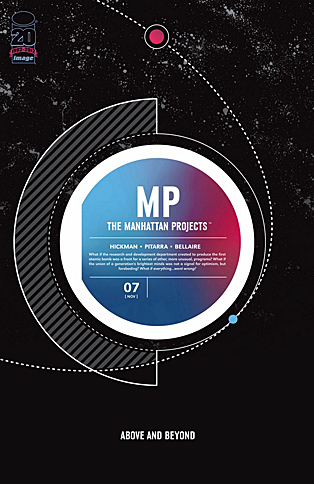 What is there to say about Manhattan Projects that hasn’t already been said? The book is batshit insane. Every issue thus far has been full of big ideas, creepy visuals and all manner of weird things. Oppenheimer ate his brother in the first issue and that isn’t the creepiest thing we’ve seen in this book. Every issue gives readers something new to drop their jaws at.

When last we left Oppenheimer, von Braun, Einstein, Feynman and company, the origins of the Soviet Union’s counterpart to the Manhattan Projects, Star City, were revealed. The Manhattan Projects crew had also annihilated an entire alien species that was bent on destroying Earth.

This issue, while predominantly a roundtable between the Manhattan Projects and Star City, sheds some light (and skin) on just what Fermi could be and gives us a payoff we’ve been waiting for since issue #2 – von Braun and Grottrup meet again!

Jonathan Hickman and Nick Pitarra have been blasting full steam ahead with this series, so much so that sometimes I want them to slow down. I want to savor this book full of mad super scientists, dammit! Issue #7 does slow it down a bit, and shows us just what will happen when this cast of characters realizes they’re smarter than the people who run the world.

The characters drive this book more than the story, and after this issue’s cliffhanger, I’m really curious to see where they go and whether or not everything will fall apart.

To know @IanGonzales is to know New Jersey.