You have to hand it to Google. They’re developing an almost Apple-esque way of generating buzz for their mobile devices.

Last week, Google introduced the Chromecast, a simple HDMI device born out of the ashes of their aborted Nexus Q. Like the Q, Chromecast streams content from YouTube, Netflix and Google Play onto your TV, controlled by your Android or Apple smartphone or tablet. Unlike the $300 Nexus Q, Chromecast has made it to market (Google sacked the Nexus Q months before it was due to go to retail) at a far more manageable $35. Within hours, Chromecast was completely sold out at Google and its retail partners Amazon and Best Buy, and was selling for nearly triple its retail price on eBay. An offer of three free months of Netflix with the purchase of a Chromecast had to be rescinded due to overwhelming demand. So with all that on its shoulders, and with a marketplace already defined by the Roku, AppleTV, and countless Smart TVs and Blu-Ray players, does the Chromecast live up to the hype? Yes, and no. 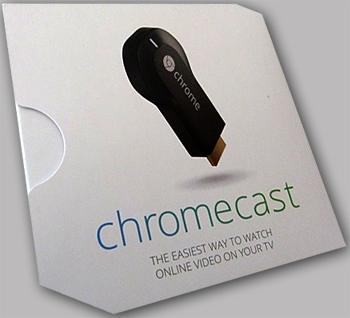 First, a huge positive: setup is dead simple. The Chromecast connects to your TV through HDMI and is powered by an included USB cable. For wall-mounted TVs, a short HDMI extension cable is included to allow the Chromecast to sit flush with the wall. For TVs without a USB port, Google also includes a power adapter. Once everything is plugged in, setup is done in two steps via the web or the Chromecast app for Android and iOS. Then you can start streaming. The stream is set up via your mobile device, but it’s the Chromecast that does all the work, freeing your phone or tablet for checking e-mail or taking calls once the video or audio starts.

The second positive is that features are being added to the device, even a week after release. A feature that allows users to share a tab of the Google Chrome browser via Chromecast opens up a world of media apps that can now more easily be streamed to TV, such as Hulu or Amazon Instant Video.

This feature, however, is still very much in beta, and thus works inconsistently. While some Chromecast owners have had it work perfectly, my own testing showed that video would freeze within 15 seconds, while audio would continue to play normally. Others have seen the opposite happen. While Google is going for geek cred right out of the gate, the average Joe isn’t likely to be patient if features like this don’t work as intended. In time the bugs should be ironed out, but until then it’s a disappointing state of affairs and a glaring lack of finish for the product.

While the Chromecast still has a way to go before it’s as powerful a device as the Apple TV, the potential is there for this to be a major player in the media landscape, at about a third the cost. Google released developer tools that will allow other media apps to stream to Chromecast, so it may not be long before Hulu Plus and HBO Go are available. Third-party developers are already testing an app that will stream photos and video taken on your phone to Chromecast. The possibilities are endless thanks to the large developer community Google has encouraged and embraced.

For the average user who hasn’t bought a wealth of media from iTunes, the Chromecast is a worthwhile purchase that may very well become a must-own in a few months.

Since the Chromecast takes over playing video, you can feel free to tweet your YouTube recommendations to @UnwinnableDonB. Nothing involving two girls and one cup, please.