The former Unwinnable Toy Hunter transitions to Tech Hunter. He’s here with a series of hardware reviews that will shed some light on whether or not we need another lump of plastic and circuit boards cluttering up our homes. 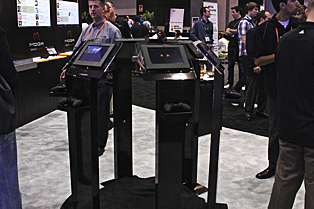 During GDC I acquired the MOGA Mobile Gaming System for my Android device. Up until that time, I was searching far and wide for a reliable gaming joystick for my tablet and phone. While ION has a number of joysticks, they can only be used with iOS devices. I was also following the indie-developed iControlPad – a Bluetooth game controller that interfaces with any phone device. While it looked well made, I wasn’t sure I wanted to invest in something that might not be supported in a year or two. I even own one of those suction cup joysticks for the iPad, but if you’re a serious gamer, you want something with a little heft.

MOGA is a new line of controllers from the POWER A company that work with Android devices. There is the Pocket controller and the Pro controller. I recently put the Pocket controller through its paces. Compared to system controllers, it is small. I have relatively small hands and noticed the controller is a little tight on room, so if you have large hands, it will probably get lost under your thumb. It sacrifices the D-pad for two analog sticks, four face buttons and two shoulder triggers. There’s an adjustable mechanism that holds your phone horizontal to create a compact gaming experience similar to Nvidia’s Shield. The sticks are short and the face buttons felt buried, but overall they are very responsive, as are the triggers.

Aside from my critical observations, I love this little joystick. I predominantly use it with a Samsung Galaxy 2 7.0 tablet and have an absolute blast playing games. The obvious choice is first-person shooters. I’ve played Dead Trigger and Shadow Gun and was completely immersed, despite the small form of the Pocket controller and the tablet’s 7-inch screen. My best (and favorite) experience has to be Virtua Tennis. The game feels as smooth and tight as playing on a PlayStation or Xbox. 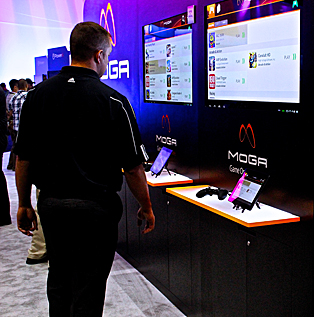 The MOGA requires you to download the free MOGA Pivot app, which comes with free versions of Sonic the Hedgehog and Pac-Man. Within the app, you download and play games and alter configurations. I attempted to test the MOGA with a MAME emulator app and had very little luck getting it to work, but that’s not saying it doesn’t work with emulators. The MOGA connects to a device by way of Bluetooth and runs off two AAA batteries. I haven’t had to change the batteries yet (fingers crossed) and have clocked in well over six hours of playtime.

I tested the Pro controller out at E3 2013 and didn’t like it as much as the Pocket controller or other pro-styled tablet joysticks. The analogs were too loose and ran away from my fingers. Maybe I needed to adjust the sensitivity in-game, but I prefer to have a little more tension on analog sticks. It did have a nice PlayStation-esque shape to it and felt light in hand. The Pro controller also adds back the directional pad, two additional shoulder buttons and a rechargeable battery.

If you are in the market for a solid Android controller with a small form, then the MOGA Pocket controller is for you.

Ken loves gadgets. Hear about it on Twitter @Kursse.