NEWPORT, Rhode Island – Regular Unwinnable readers may think I do it all the time.

But I assure you, I don’t often squeal like a 13-year-old girl.

It didn’t happen clear out of the blue. It had been building up all day long, waiting to come out through an afternoon of acoustic revelry that began with a rousing performance by the Lone Bellow and continued with a dash of punk-folk from Frank Turner, drive-by sound bytes from Jason Isbell and Houndmouth and lying on my blanket under the sun with Amelia as Jim James made noises only an acid dealer could love.

The first sign I was going to become prepubescent again appeared during a quiet set by Iris Dement, whom I haven’t seen live in about 15 years but still has the same Appalachian church picnic voice that turns away some but to me sounds like an angel. 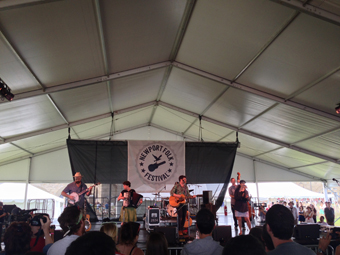 I sat there with a starry-eyed smile on my face, and though I suspect some of my Unwinnable colleagues would like to slap me right about now, I should have seen the squeal coming when the text arrived from Hannah that she had secured us amazing seats for Colin Meloy’s set.

I knew, with Black Prairie also on the Newport bill, that the full Decemberists lineup would end up on stage.

But I had no idea that when they eventually did appear, they’d bring Laura Veirs with them.

Being a geek is great fun. To me, I see it as passion without reservation. If you love something so much it makes you giddy – or, for example, it makes you squeal like a 13-year-old girl – and you can’t wait to tell everyone about it, show it or play it or share it with them, and maybe get them hooked, too…well, then you’re a geek.

Like many of the acts this weekend, I am a geek for Laura Veirs. So when she took the stage to make a surprise appearance, singing her part on the Decemberists’ “Yankee Bayonet” (from my 2006 Album of the Year, The Crane Wife) and filling in on “Down by the Water,” too, I was ecstatic.

I grabbed Amelia and shook her, even before she knew what was going down.

And then, under a tent at Fort Adams State Park, before the music kicked in again, I squealed like a 13-year-old girl.

Here’s what my traveling partners, Amelia and Hannah, had to say at the end of Day 2, as we waited for the bus back to the parking lot:

Amelia: I think the baby was kicking to the beat of the Lone Bellow. I did enjoy the [newly written] Colin Meloy tribute to going down on a girl. And my no-wait cheeseburger.

Hannah: I liked my tent selection [Quad] which I stayed in pretty much the whole day. Shovels & Rope were, by far, the most fun I had of all the bands. Father John Misty I liked, but I kind of hate-like him now because he’s a douche. And I loved when the Decemberists came out.

Check in tomorrow morning for the final Festival dispatch. You can follow Matt Marrone on Twitter @thebigm.