Unwinnable’s coverage of the 2013 Newport Folk Festival began on a rainy Friday afternoon and will continue through the weekend.


WARREN, Rhode Island – I have musical ADD. I’ve had it ever since I first visited the Grand Ole Opry.

I’ve been known to play half a song, particularly in mixed company, before skipping to another, as a theme or thread of some sort sets me off on a tangent and I absolutely must switch to something else to provide historical context, either personal or academic, for my sometimes less-than-begrudging companions. 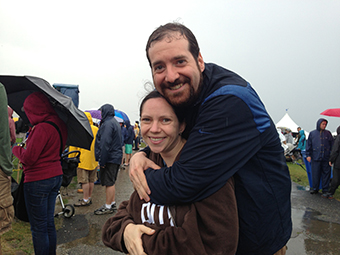 Can you play a full #@&@”$ song please?!? is a typical response. But my musical ADD, so often a minus, might be why I love the Newport Folk Festival as much as I do.

For those of you scoring at home, I managed to meet my goal of seeing both The Mountain Goats and Feist yesterday, with a combination of good timing and deft puddle hopping – getting bits of both from several vantage points, covered and uncovered, as the skies opened over Fort Adams State Park.

But that feat was nowhere near my musical ADD highlight of Day 1.

The high point? Eating sesame chicken in the rain, balancing it on a paper plate while bounding back and forth between tents – John McCauley at the Quad and Amanda Palmer at the Harbor, where she sang a Leonard Cohen song with her dad, performed an old macabre folk song with Neil Gaiman and belted out the funniest tribute to the ukulele and self-expression you could hope for.

One minute I was darting across the Quad, through the tunnel, shoveling fried rice into my mouth, emerging to see Palmer and Gaiman from behind the stage, then swooping in just at the moment a seat opened up, under cover, right next to Amelia as if by Folk Festival magic.

By the end of the day, I was soaked to the bone, doing do–si–dos with Amelia and Hannah, and singing along to Old Crow Medicine Show’s frenetic southern-fried cover of “American Girl” at the Fort Stage.

The Newport Folk Festival encourages – nay, almost requires – taking in half-shows or overhearing bits of an artist performing on your way blazing past toward another stage. It’s several concerts going on at once, starting within minutes of each other, and if you’ve got the energy for it, it’s as much of an adrenaline rush as folk music can provide.

Toss in some inclement weather and mud dancing and you have a recipe for ADD jubilation. 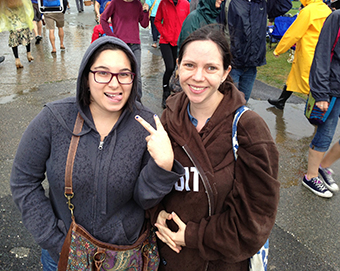 Later, as the rain disappeared and the sun peeked out just in time for a rainbow-guided walk back to the car, I was already itching to get back to the park today to hop from Iris Dement to Jason Isbell to Colin Meloy to the Avett Brothers – and to all points in-between.

It promises to be a day of reveling in my musical ADD.

A day of musical tangents, when cutting off songs halfway is not only acceptable, but an idea anyone can embrace.

Here’s what my traveling partners, Hannah and Amelia, had to say at the end of Day 1, before falling asleep while I was writing this:

Hannah: Old Crow Medicine Show was by far my favorite, in terms of capturing the feeling of the Festival.

Amelia: The grilled cheese truck was a bust. It was so slow.

Hannah: And the bread was too thick.

Check in tomorrow morning for more food, folk and fun. You can follow Matt Marrone on Twitter @thebigm.