NEWPORT, Rhode Island – Four years ago, I listened to Tift Merritt on the radio broadcast as I drove into the 50th Newport Folk Festival.

I had never heard of her, but by the time I’d parked, I was hooked, and fortunately I managed to race to the main stage in time to catch the very last song of her set.

So yesterday morning, as we listened to her – again – on the radio as we were stuck in traffic heading to the Fest, I couldn’t help but feel like I’d failed.

As it turned out, I’d make up for it.

Not only did I race through the entrance in time to catch the last few songs in her set, from just a stone’s throw away, but later I’d get to see her join Andrew Bird on stage as they played nearly a full set together, including a folk-festival flavored version of “Dark Matter,” one of my favorite Bird tunes. 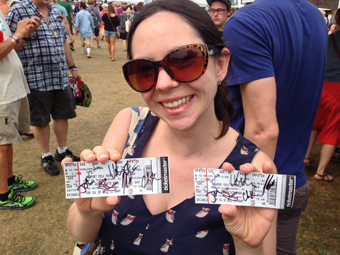 If that had been all, it would’ve been enough on a day I also met Jenny Conlee and the rest of Black Prairie (the supergroup that includes three members of the Decemberists), who signed our tickets and high-fived Amelia for being a mom-to-be, watched arguably my favorite songwriter of the new millennium, Will Oldham, perform Everly Brothers covers with Dawn McCarthy, caught my two favorite Beth Orton songs and the only Lumineers song I really like, and basically had as good a day as you could hope for.

But still that wasn’t all.

Paste magazine, as it happened, was sponsoring an intimate series of side sets, tucked into a corner of Fort Adams. Amelia and I sneaked in there to watch the Berklee Gospel & Roots Choir. Though they were just a short distance away, it was set up like a recording studio, and the best way to hear them was to wear a pair of headphones provided to you as you entered.

When they were finished, we moved up front as Tift Merritt came in to do three songs, with us just a couple of steps from her, standing under a small, naturally air-conditioned stone archway. Before she began, she walked in with guitarist Eric Heywood, and they paused a minute near a barred window, Tift gazing outside into the light. It was a perfect moment, one that stretched out into their performance, as Amelia and I held hands while they played.

At one point, I took off my headphones and pressed them against Amelia’s stomach. All three of us listened.

Later, we left the inside of the Fort and walked back onto the sun-soaked lawn. It was Day 3, the last day of the Festival, and there was still much more to do and see.

Still, I already knew what I’d be writing about for Unwinnable.

And what I’d be telling our daughter about one day.

Here’s what my traveling partners, Amelia and Hannah, had to say at the end of Day 3, as we sat in traffic leaving the parking lot:

Amelia: Rhode Island diner prices are a blast from the past. Wearing headphones while standing 10 feet away from Tift Merritt made me feel like I was in a recording studio, but a medieval one. I wish I could whistle half as well as Andrew Bird.

Hannah: I mainly did a walk-through of bands today and hung out on a wonderful blanket at the main stage. Black Prairie sounded good. Ramblin’ Jack Elliott told a heartwarming tale of his dog, followed by a heart-wrenching song about his dog dying. Michael Kiwanuka was the only artist who really reminded me of old-school 1970s folk. I think he could have been found among my mother’s records alongside Cat Stevens and such. The Lumineers and Beck were fun.

It was an awesome weekend. Thanks for coming along. You can follow Matt Marrone on Twitter @thebigm.