I don’t remember why I started taping Doctor Who. But once I did, I couldn’t stop, not until I had all of them. The Boston public television station, WGBH, ran a half-hour episode every weeknight; the station out of New Hampshire, NHPTV, aired a whole story every Saturday, a block that could run from under an hour to close to four. Tom Baker ticked through his run on one network while the other delved deep into the older doctors, William Hartnell, Patrick Troughton and then those Jon Pertwee shows, the three- or four-hour blocks where action man Pertwee ran around with the army and put away one rubber-suited lizard thing after another. I didn’t even watch half of those. But I taped them all.

Would you tape one and record over it if it’s boring?  What if you change your mind later?

A videotape could hold six hours of footage if you used the worst setting, and the worst was good enough for me. They didn’t have to look great. I’ve never been a snob about quality. I just wanted to fit them all in. I remember the labels that came on a small sheet inside each tape, the smell of the cassette after I took off the wrapping, and the meticulous way I wrote the names of the serials on the side. When the tape was almost full, I would agonize over whether I could fit on one more episode; there was a little guide on the face of the cassette to guesstimate how much tape was left, but it was never accurate. You had to be cautious. That’s also why I popped out the tab at the end, so nobody would accidentally tape over the show.

The Doctor Who series ran for oh, 20 or so years in its first stint. I’m talking about the run from the ‘60s into the ‘80s, before its ‘00s revival (or the weird one-off in the ‘90s that co-starred Eric Roberts – I taped that one, too). That’s a lot of low-budget British sci-fi – dozens and dozens of hours of it – and I had to tape it all. I would guess that I only watched about 10% of those tapes ever again, and that’s why it seems silly to me today that I would be so obsessed with getting every single one. But you know, why even start taping a show if you’re going to half-ass it?  Would you tape one and record over it if it’s boring?  What if you change your mind later?  What if there’s some important detail you need to check later on? 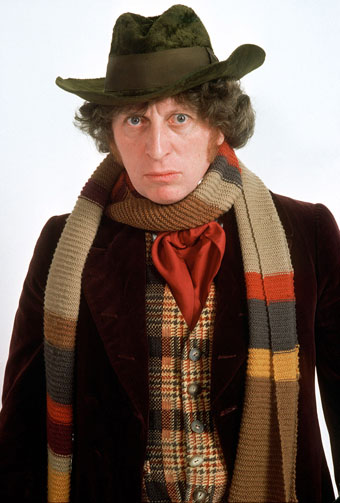 Collecting is a weird impulse, and I don’t think you can ever explain rationally why we get these urges for complete sets and clean organization. But let’s try to picture a scenario: you’re in the hospital. Or you lose your job. Or your house is snowed in, all winter. You have time to kill – hours and hours. Maybe you’re in a full body cast, maybe someone just tied you to your chair. You have all of these hours and you need to fill them. Well – isn’t that the perfect time for a Doctor Who marathon?  Maybe those Pertwee eps aged better than you thought.

As I got older, I collected other TV shows. In college, I would rush back to tape Kids in the Hall on my roommate’s VCR, which I guess didn’t have a timer. After school I watched a lot of shows but I only kept Homicide: Life on the Streets, and if you were a social archeologist, you could track my social life in those years by checking whether I was home and hitting “pause” to skip the ad breaks. Homicide was a good show. I watched most of those episodes at least twice. Some scenes I would watch four or five times – Frank in the box. Fast-forwarding to the right spot was a pain. When I made my friends watch them with me, they always got impatient.

Today, this is all moot. You can buy a whole series on DVD, they come and go on Netflix Instant, and you can binge on a marathon with your TiVO. What you can’t find on YouTube is probably in a torrent. In fact, I’ve pretty much given up any control over the shows I watch. My VCR is in the attic and the remote doesn’t work. I couldn’t tape something if I wanted to.

So it’s easy to think that the hundreds of hours I spent taping, and collecting, and labeling, and never actually watching those tapes were a waste of time, just some weird animal urge like a squirrel hiding food and forgetting about it. But I’ll say this. You can’t buy a complete Doctor Who on DVD – not unless you want to spend thousands and thousands of dollars. Any day now I could break every bone in my body. And I will regret nothing.