And I need you to tell me how to spend it.

That’s right, you mythical “regular readers,” this column is about you and your ideas. I expect the comments section to soon be packed with helpful suggestions, witty remarks and touching personal stories of your own gift cards and recent purchases.

When I began the Rookie of the Year column back in 1967, I was lucky to get a single comment on any of my posts. Now, a half-century later, I sometimes get as many as two or three.

So here’s my setup if you somehow don’t already know it: I have an Xbox 360 and a Wii. Skyrim and Portal 2 have been my favorite games in recent memory, and Fable 2 was awesome as well. I don’t touch the Wii unless I am feeling nostalgic, and that usually lasts as long as it takes to play to World 8 in Super Mario Bros. using Warp Zones. 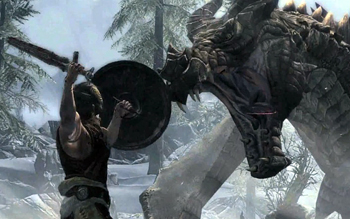 I probably haven’t played nearly as many games as any of you have. I am not averse to trying a “classic” – but I’d prefer it to be a more recent classic. I just beat (and mostly loved) BioShock Infinite, I
own and hate Assassin’s Creed III and have come to a grinding halt in both Grand Theft Auto IV and Red Dead Redemption. Rockstar Games be damned.

So what’s next for me?

Please comment below so that I don’t have to create fake accounts and do it for you. I don’t want to be Peter H. from Staten Island who recommends some first-person shooter that I will suck at or Joe P.
from Manhattan, Kansas, who tells me to buy Bastion, which I already have. I also don’t want to be Chris M. from Texas who had a dead-end job but now makes $5,000 a week just by “working on his laptop,” because I already spend enough time working on a laptop and I can assure you it doesn’t pay anywhere near that well.

What if you don’t want to give me advice? What if you don’t give two shits what I do with my money? Then you’ve stopped reading this by now anyway or never even started and begging won’t do me any good. Hopefully you’re at least writing something helpful on Facebook, where most of my comments come from nowadays; where most comments come from nowadays, in fact.

I will say this, though: If this post gets more comments than whatever the last thing Jenn Frank wrote, I will give the gift card away to a random commenter.

Matt Marrone would be happy if just one person commented. Chuck could just write “All Day!” and Stu could simply type something that sounded exhausted and not at all amused. You can message Matt on Twitter @thebigm.

Rookie of the Year: A Mammoth Global Conspiracy
Previous Post