The strangest thing about The Last of Us is that, despite how much I enjoyed the game, despite how emotionally challenging it becomes, I find myself continually thinking of new ways in which I wish it were different. For every intriguing twist and turn it took, I can see the path not taken and wonder what lay down it.

When I started playing it, I hated how many enemies there were. For a game named The Last of Us, the world seemed very crowded. I didn’t want The Road: The Game per se, but I did want more space, more quiet tension, more emptiness. I am keen to see a game released that focuses on a long atmospheric exploration punctuated by only one or two terrible moments of violence and danger.

After I finished The Last of Us, I was recovering from a bad illness and I wondered what a game would be like if it could cause its player actual physical discomfort. What if playing a game could make the player feel frail and vulnerable?

Most recently, a month after I put The Last of Us back up on the shelf, I came across a screenshot from the demo shown at E3 2012. It once again got me thinking. 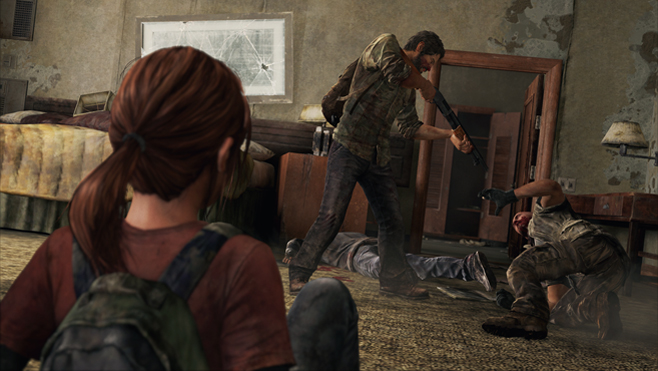 What if, instead of playing grizzled Joel, the latest (and in many ways, most interesting) iteration of the strong, silent protector archetype, the player took the role of Ellie for the entire game?

The Last of Us flirts with this notion twice. In the prologue, the player takes the role of Joel’s daughter Sarah on the evening before the apocalypse. As Tommy, Joel’s brother, drives and Joel navigates, Sarah is left to her own devices in the back seat of the car. All she can do is roll about from window to window and watch her world descend into chaos. It is a brilliant, emotional moment.

Much later in the game, the player controls Ellie for a stretch of time. She is a capable character in Joel’s absence, though smaller and physically weaker. However, she bristles with weapons and is, most importantly, on her own.

The Last of Us I wish I could play is everything between those two points. I’ve driven around in characters like Joel a million times, but I’ve never had to follow someone like him. I can always fend for myself in a videogame, but what if I needed to have someone fend for me?

Instead of being the offensive brute, I want to play the support role, jury-rigging items and tossing bandages at a crucial time. I want to stay out of sight while the men with guns are hunting me. I want to risk my own life to save Joel’s by flying out of cover with my switchblade at the last possible moment. 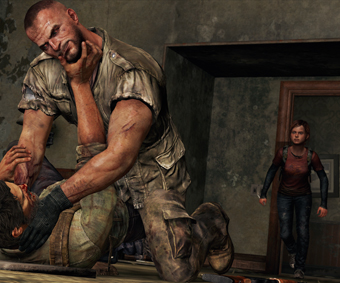 No matter what the narrative tries to impart over the course of The Last of Us, Ellie is never in danger when Joel is around. Enemies can’t see her, even when she is right in front of them. It is a dissonance caused by design decisions meant to minimize a player’s frustration at chaperoning a fragile companion who they can’t directly control, a gameism, as Tom Bissell calls it. And yet, if you change the roles, the dissonance disappears.

More intriguing, though, is how the relationship between the two characters could change. Instead of their proxy father/daughter relationship playing out in cutscenes, a player in the role of Ellie could be working to foster or diminish that bond.

Periodically, when Joel dispatches someone in particularly grisly fashion, Ellie will express her shock and disgust.

These are moments intended to subvert what would traditionally be a self-congratulatory moment in a game. When else do we celebrate but when we have dispatched our opponents in grand fashion? Ellie’s disapproval underlines the actual horror of the violence.

I wonder what it would feel like to merely sit and watch, to observe the violence instead of to inflict. Would I push the “What the fuck, Joel?” button after a kill? Or would I stay silent? To appeal too much to Joel’s humanity makes him a less effective protector. When surrounded by murderous bandits, I do not want Joel to hesitate in keeping me safe. Yet, after the battle, I do not want to pretend to be all right with the terrible gore.

The line between being protected and being a prisoner blurs.

Videogames tend to focus the player experience on how it feels to commit violence. We rarely find ourselves placed in a role without agency, one that forces us to bear witness. If we did, we might not be so quick to justify as necessary the shooting of an unarmed man in the face with a shotgun. We might find ourselves uncomfortable in the company of a man whose deeds are good but whose actions are murderous. The line between being protected and being a prisoner blurs.

Perhaps then, the title The Last of Us wouldn’t refer to the number of people left in the ruined world. Perhaps it would refer to something inside, a limited resource of human connection that, when depleted, leaves us nothing worth fighting for.

The Burnt Offering is a semi-regular column in which Stu Horvath thinks too much. Follow him on Twitter @StuHorvath, where he doesn’t.

Agency, gameism, Murder, Perspective, The Last of Us, The Road, Violence