“Quick, come downstairs! Quick! Someone from here’s on TV!”

These are beloved moments of my childhood. In the 1990s, UK television did not consider Northern Ireland to be nearly as important as its mainland cohorts. Consequently, we were forever celebrating such fleeting victories as are quoted above – moments when we were briefly validated by those great and powerful TV executives all the way across the water in London.

If that big ol’ city to the east did not consider my country too worthwhile, perhaps it was time to look to the west.

When not celebrating the casting of a local actor in a nationwide miniseries, I was gorging myself on US exports. My Big Three were Star Trek: The Next Generation, The Simpsons and The X-Files. The first two were safe and enjoyable entertainment: perfect prime-time programming. The X-Files was something else altogether. The X-Files was the one I watched late at night on BBC 2 with my tiny Matsui TV, sitting propped up against the bedroom wall, transfixed, terrified and utterly drawn in.

The adventures of Mulder and Scully took me to places with exotic names (inherited from a Native-American culture I still know painfully little about), rarely escaping a particular Smalltown, America vibe that was at once instantly recognizable and yet entirely nonexistent in my own world. It’s difficult to describe exactly how minuscule Northern Ireland is to someone who comes from a real-sized country. Indeed, I still cannot fully comprehend the geography of This Great Nation where I live today. I read somewhere once that no matter where you stand in Northern Ireland, you are never more than 35 miles from the sea. Let that sink in for a moment.

Through Mulder and Scully’s quest to find where, precisely, the truth was out there, I learned of diners and cellphones, of motels and freeways, and cultivated a long-distance infatuation with the New World. I started to think that if that big ol’ city to the east did not consider my country too worthwhile, perhaps it was time to look to the west.

It colored just about every respective facet of my interests and hobbies. My favorite music retains that flavor of emo punk-rock that could only be mined out of the Midwest. My love of videogames was born from a technophilia nurtured by Star Trek, Flight of the Navigator and Short Circuit. It was not so much that I was obsessed with America, but rather that I saw it as the logical next step: “Europe is The Old World. Now we have New Worlds.” My primary ambition was to leave this small place and install myself in a big one.

For my 21st birthday and Christmas present combined, my mum booked us both a trip to New York City. The intangible US was made flesh.

Walking through the streets of Manhattan felt as if I had stumbled my way onto a Hollywood movie set. In fact, at one point my dear mother and I were caught in the background of a scene being filmed for Lipstick Jungle. New York City was a city-sized soundstage, and I was proud to be an extra. The place felt alive in a way that nowhere has compared before or since, and I somehow knew this was not our last meeting. Flying home, America may have been finished with me, feeling the relief of losing one more bumbling tourist. But I was not finished with America.

Pushing fast-forward for just about a few years, and I am boarding one of the most exciting and harrowing plane journeys of my life: A one-way trip from Belfast, Northern Ireland to Albany, New York, whereupon I will reboot my life. I am getting married, moving to another country and (obviously) losing my job. According to the Holmes and Rahe scale, the combined experience adds up to around 300 ‘Life Change Units,’ which (apparently) is about three times as stressful as the death of a spouse. While it did not feel so extreme as that, my wife will attest to the likelihood that I had at least a generous handful of nervous breakdowns during the months that followed.

For my first six months in the US, I was not allowed to work, a situation that afforded me one commodity: time. I had so much time that it pains me to consider what I truly achieved during it. I sure did see a whole lot of websites, though! One of the saving graces of distraction was the content-mainlining Netflix Instant service, which was where I rekindled my love of The X-Files. It was not long before my wife joined in with a newfound love of the trademark Scully Pout™.

Fresh off the boat, lying on a sofa in upstate New York, the science-fiction tales (all US television, really) adopted elements of science-fact, morphing into as much my educator as my entertainer. No longer was I watching events play out in facsimile locations – I was being taught valuable lessons in US geography. This was work! 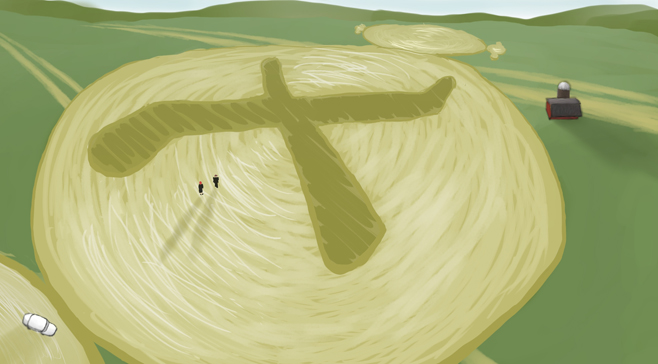 And then it happened.

Watching an episode together before we went to bed had become a semi-regular pastime at this point. I would cue the ever-wonderful spooky opening titles, while Jess would grab us some snacks from the kitchen and hop down beside me for the main event. Only this time the episode began with a cold open. A commercial airplane flies past the night’s full moon. The classic typewriter font in the corner gives the audience its bearings: SOMEWHERE IN UPSTATE NEW YORK. Past and present super-collided.

While that long-dormant excitement began to rise up inside me, I realized that something major had occurred: it was a new place that I considered home.

“Tempus Fugit,” episode 17 of season 4, originally aired in the UK on January 14, 1998 when I was 11 years old. Back then, I could not have pointed to upstate New York on a map to save my life. How time flies. Still, such a mysterious location would have transfixed me, glassy eyes lighting up from the glare of the screen. Fifteen years later, and such an introduction is no less effective. “This is serious business!” I thought to myself, “they don’t even have time for th—” and then I see the location, and I’m as excited as I’ve been in a long time.

Flight of the Navigator, star trek the next generation, The Simpsons, The X-Files