“Games look better on the black PlayStation,” I used to tell my friends – so authoritatively that I ended up believing my own words. “They run faster, too.”

It was a conversation I was always eager to start, beginning in hushed tones and ascending to a fevered pitch. The black PlayStation – otherwise known as the Net Yaroze – became something of a personal fixation, one fuelled entirely by compressed images and corporate write-ups in gaming magazines. Blast Processing, eat your heart out – this thing was a different color.

It’s only appropriate that “Yaroze” translates to “Let’s do it together”.

Eventually, I would read a little more deeply and discover that you could make your own games on it – by which point I was devout in the way that only a child can manage. My game development studio would announce its grand opening the next day; well within walking distance of the box fort, and only a short commute from the sand pit.

Unbeknownst to my younger self, the Net Yaroze was little more than a consumer development kit; a lofty, £500 piece of hardware reserved for the select few who could read and understand a reference manual – let alone the product description. It’s not surprising that Santa never got me one for Christmas.

Regardless, I still felt some marginal connection to the scene, thanks to the efforts of Ryan Butt, former editor of the Official UK PlayStation Magazine. Under his leadership, Net Yaroze titles sat alongside studio efforts on the magazine’s demo discs – a big deal in the pre-Newgrounds, dial-a-minute message board days. These were games usually reserved for under-the-table CD exchanges, here brought to the mass-market in a best-selling magazine. Needless to say, I played them obsessively. 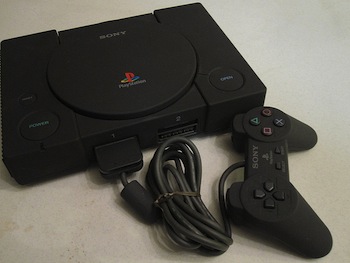 It was the beginning of something new. Mythicized in the darkest recesses of the gaming media, and sold in the corporate equivalent of a seedy back alley, the Net Yaroze would go on to claim the promise of a burgeoning homebrew scene, and the imagination of all the kids too young to understand what “homebrew” meant, myself included. In retrospect, the entire situation was ahead of its time. Independent console development – and perhaps indie development as a whole – arguably failed to find widespread acceptance until the current generation, and yet through equal measures effort and circumstance, the Net Yaroze briefly introduced an independent attitude to the big-budget console scene, giving us a taste of what was to come.

After more than a decade, I dig back through my old demo discs and load up a few Yaroze games. Ones I would have described as “classics” are actually little more than Pac-Man clones, interfaces are clunky and unreadable, and – perhaps the most convincing portrayal of independent development – half of the games don’t even work. Amazingly, it’s all still as charming as ever.

Splash screens detail the names of creators, alongside development times and release dates, and it goes a long way towards personalizing every title, whether good or bad. Side-by-side, these games don’t just represent a piece of hardware, but a community, one so inviting that even the kid dreaming away the days in his bedroom could feel like he was a part of it. It’s only appropriate that “Yaroze” translates to “Let’s do it together”.

Only now do I realize how lucky we are to engage with an industry in which people like Lewis Evans can get their games out there, whether it be on Xbox Live, the PlayStation Network, or just the plain old Internet. Brendon Chung, Phil Fish, Jasper Byrne, Richard Hofmeier – only 10 years ago, a chance demo promotion would have been their best hope for success; now, magazines and demos are only tangential to their fame.There are a few gems that still manage to hold my attention, too. I play Lewis Evans’ Between the Eyes – the gaudy lovechild of LSD and a kaleidoscope – and find myself endlessly hypnotized, while Ben James’ Psychon fills me with a genuine sense of unease – a veritable case of the heebie-jeebies that persists even at the time of writing. 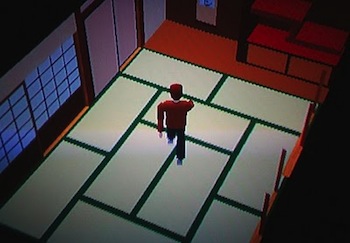 I load up the ninth game of the evening, a crude puzzler that asks me to push blocks into holes, and it crashes after five minutes. After a hasty reboot, the tenth game does the same. I turn the system off, and I don’t turn it back on.

It’s a bittersweet realization, but kids don’t have to deal with this kind of thing anymore – demo discs are a relic of times gone by, connectivity keeps us fed with updates and fixes, and easily accessible Internet discussion lets us know what to expect before games are even released. Newcomers to gaming can become part of a genuine community. They’ll never have to idolize a pie-in-the-sky idea like the black PlayStation in the hopes of finding recognition. I’m a little jealous.

With the rise and fall of development platforms like Unity and XNA, it’s difficult to imagine an off-color PS4 grabbing the senses as anything more than a production error. You can download Unreal Engine 3 and play to your heart’s content with the same tools that created BioShock, and all you need is an Internet connection. I’d imagine it’s hard to understand the appeal of a device as heavily outmoded as the Net Yaroze – more so when you consider that you had to pay for the privilege of using it.

Peel back the layers, however, and a different picture begins to emerge, one emblematic of that first glimpse into the walled garden; the turning point when independent development became legitimized outside of traditional, low-rent avenues in the West. Delving back into the Net Yaroze stable is a reminder of how far we’ve come in such a short time, representing the birth of an ideal realized in Fez, Braid, Dust: An Elysian Tale, and – I’m sure – countless titles to come.

The Net Yaroze was weird, unappreciated and misunderstood, sure, but by that very virtue represented everything I’ve come to love about gaming.

Games looked better on it, too.

The Sporting Bane of Games