When the new Green Arrow first appeared in the pages of Justice League, he was more like a wannabe than any serious hero. This, in turn, made my interest in the character minuscule, and I never bothered to pick up his new series. In fact, I haven’t read Green Arrow since Judd Winick was writing it back in 2008. But I thought I’d give issue #17 a chance because I have faith in Jeff Lemire, and because I think the concept is cool. I like archers.

But Jeff Lemire relies on some old tropes in his story, making his first entry into Green Arrow lackluster and unoriginal, even when it offers challenges for its main hero. 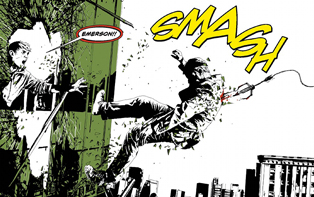 For starters, Lemire uses the in medias res technique to start his story. The purpose, obviously, is to draw readers in, but I take umbrage with this because it also makes it seem like Lemire isn’t as confident in the tale he is going to tell, so he shows you the ending first in order to let you see that, eventually, there will be some great conflict. You just have to trust him to get you there.

Additionally, because Green Arrow is seventeen issues in, Lemire has to dispense with the exposition quickly, packing the first two pages with excessive dialogue in order to bring readers up to speed. And then Lemire goes to the old “framed for murder” concept. My problem with this is that clearly forensic science and security cameras would prove that Oliver Queen was innocent, so his escape from Queen Industries feels unnecessary.

Lemire’s goal, however, is clear. He wants to simplify the character and bring him back to his basics. But because I don’t know Oliver Queen, I don’t know what his basics are. In the end, I’m still unsure of how he’s any worse or better off than he was before.

Part of the issue’s inadequacy is in Andrea Sorrentino’s art. His character designs are thinly drawn but heavily inked, so the imagery is often awash in darkness, sapping a lot of clarity from the panels. Action scenes, in particular, suffer from this. Oliver’s fight with a villain known as Komodo falls victim to Sorrentino’s stylization, as the successive panels are so incoherent that following the thread of the fight is a difficult process.

I like the idea of Oliver having to duel with another archer, but this isn’t given much time to develop, and the fight starts and ends quickly. Plus, the moon is out and bright, and then Oliver’s drenched in rain. The pacing, as well, fails to make for a smooth transition between moments.

What Lemire has going for him now is that he’s dispensed with a lot of Oliver’s past, and he has a cleaner slate with which to start. How he uses this space will be the interesting part of his story. But after reading this issue, I can’t say I’m that invested in seeing how things turn out for Oliver. 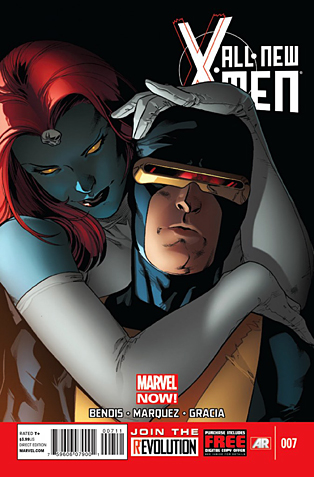 Because All New X-Men is clearly a book about Scott Summers.

It’s about a man who fell from grace, and his heartfelt attempt to right the wrongs he didn’t he know he had fostered. In Bendis’ hands, Scott is human and vulnerable. He’s clearly caught in a place here he feels injured by his future self, but unsure of how to atone. Enter Raven Darkhölme, Marvel’s most famous shapeshifter. For a few pages, it seems like Mystique is actually giving Scott some heartfelt advice. But much like she changes forms, Raven also has divided loyalties, and her conversation with Scott is only one more piece of an ever-growing puzzle.

Everyone knows Bendis can be excessively wordy, but in these moments he succeeds in sharing tangible emotions from his characters. While the scene between Scott and Raven is packed with dialogue, it doesn’t feel long, and it’s clearly the centerpiece of the issue. Bendis’ timing, especially with humor, is also present as he hits the beats – emotional and otherwise – with incredible precision.

This is also due to David Marquez, whose character designs can be both soft (for Scott) and grizzled (for Wolverine). Emotions, in particular, come to life in Marquez’s capable hands. Scott’s shock, sadness and weariness are all conveyed with aplomb, particularly in the final moments of the book when he confronts Jean Grey with a message from their future, showing her just how strong they’ve been as a couple. In fact, every image of this comic is gorgeously rendered, and where I didn’t think anyone could improve upon Stuart Immonen’s work, clearly Marquez has brought his a-game to All New X-Men.

Everything about this series works well. Bendis takes what could potentially be a gimmicky concept and he turns it into a self-exploration for both Scott Summers and the rest of the X-Men. The story is heartfelt and impressive, and each powerful image rendered by David Marquez makes this comic a treat, both in its words and images. I’m not sure how long Bendis plans on keeping this story going, but with issues like this, I don’t really care. He’s hooked me once again, and All New X-Men is another stellar entry into a very impressive catalogue of work. 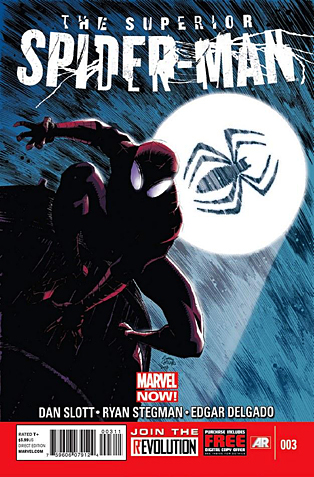 Bannen’s Book of the Week: Last week, I lamented about Superior Spider-Man’s frustrating ghost Peter and his incessant commentary. This week, however, I saw more of how Dan Slott can keep Peter around without having him become a pest. And in using Peter, Slott has found a way to get inside the mind of his main character to show readers a different side of Otto Octavius – one that has the potential to be a great hero.

Slott brings back the Vulture, one of Otto’s old Sinister Six buddies, whose return was teased of in the previous issue. But there’s a darker element to Adrian Toomes’ scheme, and when Otto discovers it, he goes a bit crazy because of his own traumatic childhood. Otto also dispenses with the Vulture in a clever and violent way, leaving readers to wonder if he has forever injured his former partner in crime.

I also wonder how Peter would have handled the situation. I know he certainly wouldn’t have gone to the lengths that Otto does, and I also don’t think he would have reacted with such violence. This makes Otto, for the moment, seem like the better hero. Slott so perfectly crafts the story that readers have no other option but to cheer for Otto in the end.

Furthermore, making Otto the focal point of the issue helps solidify his presence as Spider-Man. Interestingly, Peter gets pulled into Ock’s memories, showing that while Otto can tap into Peter’s mind, he can also tap into Otto’s. This creates the opportunity for Slott to give more humanity to Doc Ock, potentially setting up his future as a hero who could maybe even fight alongside his longtime rival.

Ryan Stegman’s art is even better this go-round. His close-ups are layered in detail, and he deftly switches from curvy, cartoonish character designs to taut, angular ones. Action scenes in particular are crafted with lucidity and precision, never once losing their clarity, even in the most chaotic of moments. The climactic end panels are rendered with such precision that they bring a palpable excitement, particularly in the final three pages. And here, as well, is where Edgar Delgado gets credit for his strong, moody colorization.

Superior Spider-Man #3 is an excellent book in its story and art. It quickly moves away from the tediousness of issue #2 to deliver a strong, exciting story that makes the conflict between Otto and Peter greater. It also makes us question not only how Peter will return, but how Otto will use his new found heroism for good.