When Padmé Amidala died and Anakin Skywalker turned to the Dark Side, their twin children were separated: Bail Organa took Leia to Alderaan to be raised as a princess and one day a senator, and Obi-Wan Kenobi took Luke to Tatooine to be raised as a moisture farmer.

But what if it was the other way around?

On board the Death Star:

“You know, between his howling and your blasting everything in sight it’s a wonder the whole station doesn’t know we’re here.”

He smiled gently and removed her hand from his arm to grip it in both of his. “The Force will be with you… always.”

Han spread his hands, blaster waving carelessly. “Bring ‘em on, sweetheart. I prefer a straight fight to all this sneaking around.”

Leia turned her back on Han and moved next to the droids. Ben was already at a monitor; he tapped a few keys and a map of the station appeared on the screen.

“Plug in,” Ben said to the droids. “He should be able to interpret the entire Imperial computer network.”

A little hatch opened on Artoo’s barrel-shaped body and a metallic claw extended to connect with the computer banks. Leia moved closer, trying to look at the screens in a way that suggested she understood what was happening.

After a few moments Artoo began to beep.

“He says he’s found the main computer to power the tractor beam that’s holding the ship here,” translated Threepio. “He’ll try to make the precise location appear on the monitor.”

On one of the screens, yellow lines began to move rapidly. Leia leaned closer.

“The tractor beam is coupled to the main reactor in seven locations,” Threepio said. “A power loss at one of the terminals will allow the ship to leave.”

Ben studied the images for a moment longer, then looked up at Leia, Han and Chewie.

“I don’t think you three can help. I must go alone.”

“Whatever you say,” Han shrugged. “I’ve done more than I bargained for on this trip already.”

Ben shook his head. “Be patient, Leia. Stay and watch over the droids.”

Ben covered her hand with his own. “They must be delivered safely, or other star systems will suffer the same fate as Alderaan. Your destiny lies along a different path than mine.” He smiled gently and removed her hand from his arm to grip it in both of his. “The Force will be with you… always.”

Before Leia could protest, Ben had released her hand and, adjusting the lightsaber on his belt, slipped out of the room. Leia caught a glimpse of his back as he treaded silently down the long gray hallway before the door slid closed again.

Leia felt her mouth hanging open. She closed it as Han rounded on her. 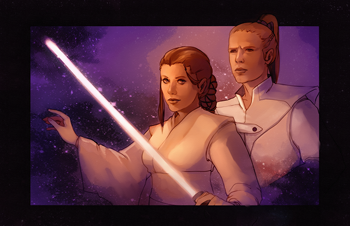 Leia crossed her arms. “Ben is a great man.”

“Yeah, great at getting us into trouble.”

“Do you have any better ideas?”

Han looked Leia up and down. “Well,” he sneered, “anything would be better than just hanging around waiting for him to pick us up…”

A furious blush rose to Leia’s sun-darkened cheeks. “Who do you think you -”

Artoo’s sudden whistle cut her off. “What is it?” she snapped, rounding on the droids. Behind her, Han snickered.

“Who has he found, Threepio?” said Leia impatiently.

The anger vanished from Leia’s face. “The prince?” she gasped. “He’s here?”

“Don’t be jealous, Solo,” Leia sneered over her shoulder.

“Level five,” Threepio interrupted. “Detention block A A 23.” The droid’s gold-plated head twisted around to look at them. “I’m afraid he’s scheduled to be terminated.”

“What are you talking about?” said Han loudly.

“The droids belong to him, he’s the one in the message -” Leia looked up at Han, her eyes wide. “We’ve got to help him!”

“But he didn’t know the prince was here, Han!” Leia turned to the droids: “Can you find a way back into the detention block?”

“But they’re going to execute him!” Leia cried. She took a deep, steadying breath, then looked up at him. “Look,” she said, her voice more even, “a few minutes ago you said you didn’t just want to wait here to be captured -”

“Marching into the detention area to rescue your prince charming is not what I had in mind!”

“But they’re going to kill him!”

“Better him than me!”

“You’re right, he is better than you!”

Han folded his arms across his chest and glowered.

Chewbacca let out a low growl.

“Yes! Rich, powerful… Listen, if you were to help rescue him, the reward would be…”

“Well, more wealth than you can imagine!”

“I dunno, sweetheart, I can imagine quite a bit.”

Leia stepped in close to him, her face upturned and her brown eyes fixed intently on his. “You’ll get it,” she said.

Han hesitated, wavered as if about to step away. He stared at her.

“I better!” he said finally.

“All right, all right, sweetheart,” Han said grumpily. “You’d better be right about this.”

“All right.” Leia turned back to the droids and the computer monitors. Behind her back, Han and Chewie exchanged glances.

Han put his hands on his hips. “What?” he mouthed.

“Okay!” said Leia. Han and Chewie quickly looked away from each other.

Leia raised an eyebrow, then smiled excitedly. “Here’s the plan…”

Dredd vs. RoboCop: The Man Inside The Machine
Previous Post