The only reason I know what Los Angeles looks like is because of videogames. I don’t see the city any other time except to head west and cover E3, our industry’s Paris Fashion Week, so in my mind the Los Angeles Convention Center always has an Ubisoft banner stretching between South and West hall. There are always karaoke buses and women in powder blue patent leather suits walking to the Staples Center after a nine-hour shift of bearded, suited or red-plastic-wigged gawkers staring lasciviously at them. 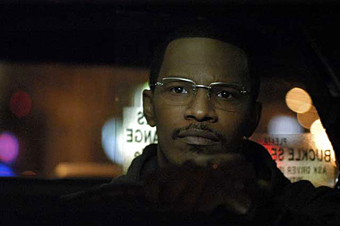 But 51 weeks of the year, L.A.’s sprawling metropolis isn’t crawling with socially awkward journalists, developers hitting on publicists three times out of their league or GameStop managers hunting down the next open-bar party.

I have a love/hate relationship with my hometown. Grand Rapids, Michigan is a cemetery with lights that quivers under the watchful conservative gaze of the two Dutch patriarchies at the heart of Amway Corporation. Even though Grand Rapids is the second largest city in Michigan, it still has this weird small-town everybody-knows-everybody charm to it, despite no one wanting to talk to each other on the street. Our downtown is roughly three miles square, and I can’t hail a cab if it’s driving past me; even without a fare, they either can’t or won’t stop.

Our dirtiest areas are cleaner than most of L.A., which is why what hit me while I watched Collateral earlier this year felt so odd. For all the gross shit I’ve seen and done while there, I missed the City of Angels. The credits rolled, and I couldn’t wait to get back and make sure L.A. was still the Videogame City in my mind. Seeing the Figueroa Hotel’s sidewalk-to-rooftop murals comprised of football players instead of Bethesda characters jarred me.

When Annie (Jada Pinkett Smith) gets in Max’s (Jamie Foxx) cab and gets a ride downtown from somewhere by LAX, and they start arguing routes and cheaper fares, I couldn’t help but think of the $150 round-trip taxi ride it took for three buddies and me to get to the Bethesda party in Hollywood two years ago. Because of free booze. 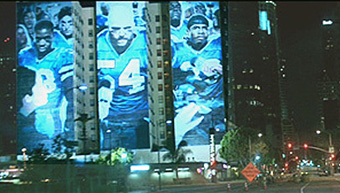 Fifty-foot tall palm trees loom tall and menacing under the moon’s light as they line empty boulevards. Max’s cab as the sole bit of traffic on six-lane city streets or a 10-lane highway, everything I hate about the city but can never put a finger on as the week progresses distilled in a single frame: regardless of how massive and populated L.A. is, it’s too sprawling and disconnected. Once I establish Video Game City is as I left it, I can’t wait to leave.

Die Hard, Drive and Terminator 2: Judgment Day are set in L.A., but none of their L.A.s feel like the L.A. I know. Collateral does. Michael Mann’s 2004 flick presents the city exactly as I remember it: a waxy veneer covering a hollow soul. The longer the night goes in the film, the more desolate the streets appear. I’ve stumbled drunkenly through the downtown roads that Max’s cab careens around and skids on its roof. Crickets are the only life at three in the morning and when they go quiet, downtown L.A. is the loneliest place on Earth.

Timothy J. Seppala is a mercenary writer; this is his first piece for Unwinnable. Follow him on Twitter @timseppala.