Imagine a sweat-packed meat club full of electric-veined twenty-somethings raising their arms to fluorescent lights like a million little joysticks, bellowing joy at a projected moving image. The bass vibrates from the stage, filling the bodies with animalistic desire and rage, every bit as one with the fleeting hero in front of them. The hero grits teeth and cries tears of concentration, his fingers slip wet over WASD, and his every movement provides pain and ecstasy and an explosion of colors.

Projected onto the wall, huge and pulsating: Hotline Miami.

This is it. This is the game we needed for our version of stadium rock. Only it’s cooler, sleeker, sexier than rock. It’s a game I want to press my chest against, but I couldn’t because everyone at Rezzed was watching. It’s a game I have wanted to play again ever since my fingers touched the keyboard associated with it. I only played it yesterday and already, I don’t know what to do without it. I have watched the trailer nine times now. Nine. I can’t wait for autumn, Mr. Cactus, I can’t. Give it to me now.

The hero grits teeth and cries tears of concentration, his fingers slip wet over WASD, and his every movement provides pain and ecstasy and an explosion of colors.

Hotline Miami embodies what every single technology era movie has tried and failed to say about games. Hotline Miami is like being able to play through a William Gibson novel. Hotline Miami is hot, candy-colored gratification. If there were a definitive work about how cool PC gamers want to be (but aren’t), this game would be it. It is painful how far away I am from this game as I sit at my PC and weep.

All you need to know about Hotline Miami is that just like its 80s attitude it doesn’t care about you: it cares about itself. It is a merciless, brutal crime romp through a series of buildings made almost impenetrable by dudes. And sometimes dogs. But almost is the important word: there may be many ways to slip through the crack to the next level – but believe me, in each level there is one crack and it is very small. Not that you will care. You will happily thunk through the same skulls and mash the same people’s faces in for hours and hours, the whole time your body so on edge if anyone so much as touches you on the shoulder you will claw at their throat before you remember yourself and apologize and try to usher them out so you can do it again. 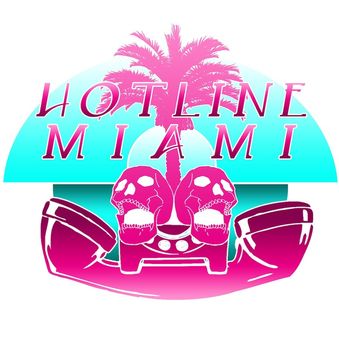 Everyone I spoke to at Rezzed about this game got a slightly dreamy, obsessed look on their faces whilst talking about it, like they were recalling a particularly good acid trip. In fact, I am sure most of this game was composed in Sir Cactus’ head during a particularly good acid trip. The hallmark of the game: myself and two other guys had been watching someone die through the third level for twenty minutes, in silence, when one guy said to the other, “This is really good, isn’t it? But it looks…difficult.”

I turned to him and said, “You know, yesterday, I saw someone complete this level.” They stared at me, wide-eyed, as if I had witnessed Jesus himself descend to earth to tell us the secrets of how to kill three guys with a baseball bat, throw the bat across the room at a fourth to knock him down, choke him to death, and machine-gun down the rest before running the fuck away. “Yeah,” I said. And we all turned back to the screen to continue staring, the music vibrating through us like a Siren’s call, our fingertips screaming for mouse and keyboard.

When you are playing Hotline Miami, you have the glorious feeling as if every object were a weapon built for ease of manhandling and throwing away, that everything is made for you to pick up and skate haphazardesque through corridors like an underprepared Bambi into a cul-de-sac of shotgun-ready Republicans. Of course, of what I saw everything isn’t – you can’t pick up a lamp and use it to give someone a new bloody hat, but you feel like you can. And like Durex might neglect to say, feeling is everything. Every enemy in the game will one hit kill you, and so you scramble and switch weapons like they might burn your hands off if you held them longer than five seconds. 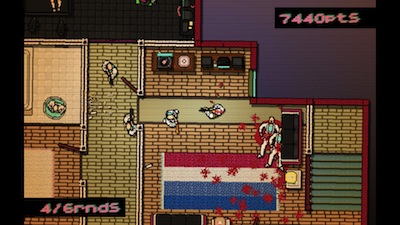 This game is the slick-maker. You die so many times learning about your enemies that once you do it – once you pull it off, switching from crowbar to shotgun and back again, choking out a highbinder as you go, dodging, weaving, using cover as if it were the endgame in Heat – you look so suave to an audience you might as well depart your chair, adjust your tie and leave with Lauren Bacall on your arm. It makes you wish you’d recorded the whole thing to play at your funeral, so you can say This is how good I am to everyone who ever cared about you. The precision and speed with which you are forced to move your guy is akin to the way in which Seal Team Six probably moved when they gave Osama the Big Goodbye. This whole game is a lesson in action and reaction, at breakneck speed. With beats.

Did I tell you about the soundtrack? Oh god, let me tell you about the soundtrack. It is the vibrating eighties beat of Drive, the soundtrack that the original GTA wanted but couldn’t have. It is a pumping powerhouse of neon rave, addictive and sordid. The background of the levels change color like gross crackhouse fairy lights in time to the bassline. If you look too hard at this multicolored ecstasy of a background you feel like your body might melt into it and take you away. When you die, which will be more often than you blink, you start right over immediately, not a drop in the beat. Keep going all night, it says. Keep going until dawn birds knock you into realization that you have wasted your life on this beautiful and savage game. Each environment is a new triumph of brutal one hits, and the plot increasingly persuades you that you are hallucinating, that you are a deluded idiot for playing on, and yet you cannot tear yourself away.

If this game, when it comes out, does not have club nights where gamers flock to raise their arms in unison at the projected glory of Hotline Miami thumping through our feet, I will start it myself. I swear, I will start it myself. You, the reader, can Kickstart it. We will drink and hallucinate pixellated pretend violence together. And then we will go home to our boring lives, and have our fingertips twitch with the pain of loss.


This article has been reprinted with kind permission from the author’s blog, Welcome Blue Valkyrie.