The fact that I have to open this article with a spoiler warning is a shame.

If his film and television output is anything to go by, J.J. Abrams fancies himself a magician. He believes his sleight of hand abilities are bar none, able to utterly fool audiences everywhere. Nowhere is this more evident than his TED Talk from 2007, where Abrams uses a box full of magic tricks to illustrate his beloved philosophy, the “mystery box”: using secrecy to draw the audience in. Ever since the massive success of LOST, it seems like every other Abrams joint needs to have some form of pre-release secrecy. What is Cloverfield? Is there something more going on in Super 8? Who is Benedict Cumberbatch playing in the new Star Trek movie? 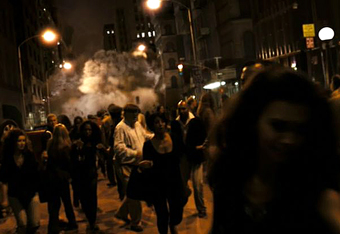 I can’t talk about these mysteries without “spoiling” a major aspect of the film, because of the marketing. In some cases, the film is hurt by this practice. Cloverfield (which Abrams produced) is just a monster movie with a shaky camera, Super 8 is just The Goonies but with a monster, Star Trek: Into Darkness is just a decent space action movie. Notice the recurring use of “is just” – letting your audience’s imagination run wild is a dangerous thing. It’s quite possible they’ll imagine a better film.

In the lead-up to Into Darkness, I heard all kinds of rumors. At one point, the prevailing rumor detailed a scenario where an evil clone of Jean-Luc Picard created by the dimension-hopping events of Star Trek: Generations went back in time and fought Kirk. Now, that’s a dumb idea, but it’s the best kind of dumb idea. The final product’s quality is irrelevant; it couldn’t possibly live up to the script I wrote in my brain. Can you imagine how great and/or ridiculous a Kirk vs. Picard movie would be? Already, the marketing has set an impossible expectation.

The best surprises are just that: surprises. You don’t tell an audience – either implicitly or explicitly – you’ve going to surprise them, because they’re expecting it. Hot Fuzz, one of my favorite movies of all time, has a spectacular third act that would not have blindsided me the way it did if all of the trailers hinted at a crazy finale. But no, it turns out Cumberbatch is just Kahn. Yep, the guy from the most popular Star Trek film is the antagonist in this one. The reveal isn’t even this big moment; Cumberbatch just drops the name about thirty minutes into the movie with two more hours to go. If they just admitted it was Kahn from the beginning, perhaps it wouldn’t have been as disappointing.

Let’s put away what might have been for now. It’s no use complaining about wasted potential, because the final product should be judged independent of its marketing. That’s not even taking into account that the identity of the bad guy is a silly thing to hide, considering there are only so many iconic Star Trek foils to repurpose and Abrams has already confirmed they’re using an existing character from the Trek canon. But that’s another problem with the whole secrecy-based marketing thing. Any criticism I have entirely hinges on the Khan twist and how they use it, but I can’t articulate that without spoiling an innocent bystander. 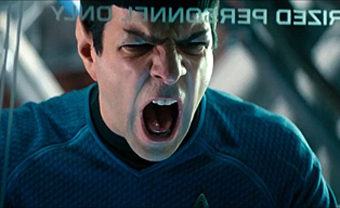 Star Trek: Into Darkness rips off some of the most iconic scenes and images from The Wrath of Kahn, in between name-drops for fanservice’s sake. There’s a bad Federation ship, Kirk has to enter a radiation-filled chamber in order to save the Enterprise, a dying Kirk puts his hands up against one side of glass while Spock does the Vulcan salute on the other, Spock yells “Khaaaaaaaaaan!” at the top of his lungs, Dr. Carol Marcus shows up and Spock says, “The needs of the many outweigh the needs of the few,” because that’s something everybody remembers from that movie. Also, Tribbles make an appearance. Now, many of these – let’s be generous and say “homages” – are relegated to Into Darkness’ climax. Society generally classifies spoiling the end of a movie as a bad thing, so if I were to condense all that into a safer delivery method, it would probably just be, “It’s just a little too similar to The Wrath of Kahn at times.”

But I can’t say that, because the identity of Into Darkness’ villain is supposed to be a mystery! If I name-drop Kahn, the first reaction from people who have seen that movie will be, “Oh, so Benedict Cumberbatch is playing Kahn. Great, thanks for spoiling it.” Nobody wants to be the guy who spoiled a movie for somebody else. Regardless of all the studies that claim going into a film spoiled increases enjoyment of said film, that should be a conscious choice on the part of the viewer. But what if you have friends who adore Star Trek? How do you let them know what they’re mildly interested in seeing could possibly give them a serious rage stroke?

I was put in this exact position about a week ago, when my Social Psychology teacher asked me how the film was. Now, she had already established herself as a geek, but I didn’t know how much history (if any) she had with the franchise. Not knowing how to react initially, choosing instead to dance around the question. I asked her if she had seen any Star Trek previously. “Oh, some here and there,” she replied. It wasn’t enough to go on, so I just gave a general recommendation and ended the conversation before I spoiled the movie. And that’s just not acceptable to me. I love writing reviews because they help somebody make a decision, even if it’s one person. Sometimes people need a more detailed outline of something’s pros and cons than, “Oh, well if you liked the last one, you’ll be fine.” It doesn’t always work like that; especially since the 2009 film committed far less egregious offenses. I can’t in good conscience recommend a movie I’m not entirely sure somebody will like, but all this secrecy makes it difficult to parse a person’s tastes and prior experiences. So any word of mouth I could possibly contribute has been neutered, and I’m sure I’m not the only one. Devin Faraci’s review on Badass Digest just had a big spoiler warning at the top, with nothing as a consolation prize for people who preferred to go in pure. 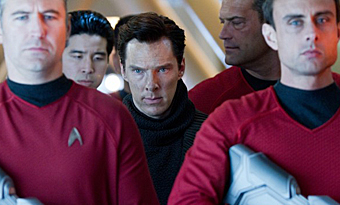 Everything about this whole secrecy-based marketing nonsense just irritates me, especially when something as trivial as the identity of the film’s antagonist is the aspect being hidden. It makes conversation about the movie unnecessarily tricky. In a world practically buried in blogging and microblogging sites, making it harder for your audience to spread the word about your film is generally a bad idea. This isn’t always the case: if the entire film hinges on a big twist, secrecy is a must. But Star Trek: Into Darkness is a dumb space adventure film. It’s breezy, fun, and filled with action, not the next The Usual Suspects. J.J. Abrams likes to talk about how he would never open his mystery box, because the mystique is far more interesting than reality. But here, the mystery box that is John Harrison’s real identity was blown wide open. And, what a surprise, reality continues to be disappointing. Maybe Abrams should actually pay attention to what his beloved little box actually represents before trying to apply that concept to film and television marketing.