Everyone has them. For better or worse, there are decisions we make – great and small – that we sometimes look back on and think: perhaps things would be better had I turned right instead of left.

Lord knows I’ve had a few. But I’ve learned to accept them over the years, and that’s in part because of “Tapestry.”

The 15th episode of Star Trek: The Next Generation‘s sixth season is hands down one of the show’s best, and easily my favorite episode of the series. It centers on Captain Jean-Luc Picard, who suffers a life-threatening injury when a phaser wound destroys his artificial heart. This leads to an encounter with Q, who gives Picard an opportunity to fix the mistake he made when he was younger that caused him to lose his real heart (thus saving himself in the present).

The Enterprise captain is then blinked back, Quantum Leap-style, into his own past. He again becomes “Johnny” Picard, a fresh, young Starfleet Academy graduate enjoying one last night with his two best friends before shipping out.

According to history, an unfortunate encounter with a particularly ugly group of Nausicaans leads the future captain to get stabbed in the back. His heart is pierced through, forcing doctors to install the artificial organ.

Picard, however, hopes to change that.

“I was a different person in those days,” he says of himself. “Arrogant, undisciplined…with far too much ego, but too little wisdom.” Wipe away that mistake and, he believes, his life will be better.

There isn’t one of us who hasn’t looked back at a decision or action from their past and thought the same way. Mulled over how they could have made a different choice, and how that could have impacted their lives – and perhaps also the lives of others – for the better.

For some, altering their past could very well improve their condition. But most people, I imagine, would learn the very thing that Picard learns: when you pull a string from your past, you unravel the very tapestry of your life.

“Tapestry” had always helped me put my choices – both good and bad – into context. And as I’ve gotten older, and more comfortable with myself and my life, those regrets have faded. 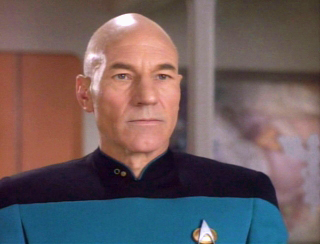 In order to avoid the dagger to his heart, Picard must keep his friend from cheating at a bar game against the Nausicaans. But doing so has consequences both immediate and in the future. Jean-Luc ends up alienating not one but two friends with whom he had originally remained close with for years to come. He also alters the course of his life and derails his career. Instead of a heroic captain, Picard turns into an aimless lieutenant with no goals, no aspirations, and no chance for promotion.

“You should be happy!” Q tells him. “You have a real heart beating in your chest and you get to live out the rest of your life in safety – running tests, making analyses and carrying reports to your superiors.”

Disgusted by the man he has become, and frustrated with himself for his own shortsightedness, Picard asks Q for another chance.

“That man is bereft of passion and imagination,” he tells Q. “That is not who I am.”

“Au contraire, he’s the person you wanted to be,” Q argues. “That Picard never had a brush with death, never came face to face with his own mortality, never realized how fragile life is or how important each moment must be. So his life never came into focus. He drifted for much of his career, with no plan or agenda, going from one assignment to the next, never seizing the opportunities that presented themselves.”

Picard decides death would be better.

“I would rather die as the man I was than live the life I just saw.”

Of course, the captain recovers from his injury, and the episode never quite makes it clear if what he experienced was real or just a dream. But Picard learns to appreciate not only the man that he was, but the man that he became as a result. 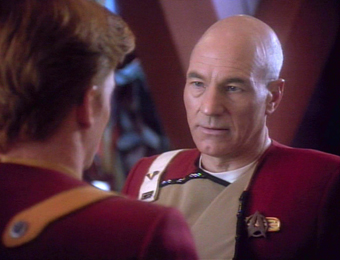 The episode has an It’s A Wonderful Life quality to it. Like George Bailey, Picard gets to experience life if things had been different. Q, like Clarence, helps him discover that what he had wasn’t quite as bad as he thought. That despite the questionable actions and choices he made in his past, those experiences enriched his life by allowing him to learn and grow. And he couldn’t have done that without making mistakes.

“Tapestry” puts life in perspective for Picard. And in a way, it has always done the same thing for me.

I spent several years unemployed in the 2000s. During that time I became a father and was a stay-at-home dad. Today it is fairly common, but at the time I always felt like the odd man out. Often at the park or during outings, I was the only man with a child and the mothers I encountered generally alienated me.

It wasn’t an easy time. Money was tight, whatever friendships I had evaporated, freelance work was scattered and the job interviews I went on went nowhere.

But I look back at the period, and with “Tapestry” in mind, it helps me put it into better context. If Q were to offer me a chance to undo it, I would not alter a thing. Because during those years I spent every day with my son, changing diapers, taking him for walks, playing games. If I lost all that, I wouldn’t have the bond with him that I have now.

So despite the negatives, it was all worth it.

“There are many parts of my youth that I’m not proud of,” Picard tells Riker in the closing scene of “Tapestry.” “There were loose threads, untidy parts of me that I would like to remove. But when I pulled on one of those threads it unraveled the tapestry of my life.”