This is my ode to Shannen Doherty’s nipples.

The jewels of her perky breasts peek through slinky dresses and tops. Free from bras, the nubs are still bound by cotton or silk. Only outlines of nipples are clear.

I want to see more. 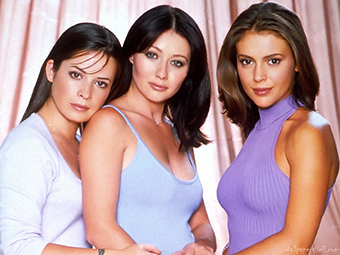 While I am sexually attracted to breasts, my desire for nipples released from fabric is also a spiritual statement. Witchcraft, unlike most organized religions, celebrates the female body, from areolas to vulvas.

Before I became a witch, I struggled to love myself. I’ll spare you most of the bloody details, but I will say I have suffered intense migraines and cramps – monthly pain that people born without a uterus will never completely understand and people without uteruses have tried to keep me from receiving the medicine I need to alleviate this pain.

The Charmed Ones have powers that could not only combat external oppression related to reproductive rights, but also lessen or obliterate internal pain. Yet, the show – as an accurate reflection of society – locates femininity in clothes. There is a recurring theme of Prue, Phoebe and Piper borrowing outfits and, frankly, I love to see the dresses almost as much as the nipples.

Periods are rarely, if ever, discussed on Charmed. Menstruation, while not as attractive as breasts, is a central part of female existence, one that remains when clothes are stripped away.

I want to see more about blood.

My bloody life began when I was a preteen. Shortly thereafter (before I was sexually active with men), I went on the pill. I began to study witchcraft around the same time. While manufactured hormones regulated bleeding and lessened pain, I learned about my natural yonic power.

I’m a very eclectic witch; my beliefs align most closely with Wicca (and I enjoy the Wiccan phrases and traditions on Charmed, like “so mote it be” and handfasting), but I have researched many different forms of magic, from alchemy to voodoo. The diversity of magic attracted me partially because I am multiethnic.

Femininity must be wrapped in designer threads.

In my studies, I found goddess religions and matrilineal societies that honored and celebrated menstruation. Women were knowledgeable about the power of their blood, blood that cycles with the moon. One lesson that stuck with me, as I have some Native blood, is how sweat lodges – often male spaces – were created to mimic moon lodges: places where women would gather to work medicines during their moontime.

For many television heroines, periods are off-screen phenomenon, and the women of Charmed are no exception. While Prue, Phoebe and Piper may agree that there is no such thing as a too-tight dress, being skyclad – practicing witchcraft without clothes – is regarded with squeamishness. There are no charms for cramps shared among the sisters.

Femininity must be wrapped in designer threads.

Part of this obsession with clothes is due to American television standards; nakedness is “bad” and should be censored. The other side of this is consumerism – femininity, located in clothes, is something that can be marketed, bought and sold.

I want to see witchcraft divorced from capitalism. I want to see the naked female body revered and honored, feminine blood considered sacred.

While I advanced in my craft, I ran into trouble gaining access to the pill. Not only did I have to endure uncomfortable pap smears, I had to pay out of pocket for the experience. I quickly learned that I could not afford the annual exams and monthly medicinal costs. My female experience came with too high a price tag. Without Planned Parenthood, I would have suffered pain male legislators will never endure.

Yet these legislators tried, and keep trying, to keep me from getting the pill. Witchcraft cannot be used to vanquish men who want take away the ability to control my body; “harm none,” a part of the Wiccan rede, includes not hurting misogynists. On Charmed, the women are not allowed to use their powers on mortals, no matter how evil they are. This part of my ethics – with many of its complications – is mirrored in the show. 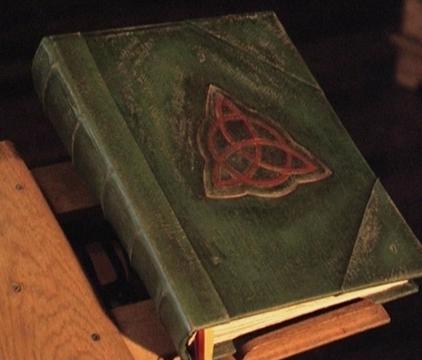 I have sought alternatives to the pill – ancient, natural remedies – and I have had moderate success, but nothing has worked as well as the pill in regulating my flow and easing my pain. Furthermore, it should be my choice; no man should be able to tell me which medicines I can and cannot take.

No man will ever see the female body like I do, but I think exposing a little more blood will inspire empathy instead of legislation.

While Charmed does not include knowledge of the female body beyond the superficial (gorgeous women’s clothes that display pert, attractive nipples), it does value female-authored books. The Book of Shadows is written by generations of women and consulted every single episode by Prue, Piper and Phoebe. The Charmed Ones also craft their own spells and add to the book.

My practice – mostly solitary – is centered on books and writing. One shelf of my bookcase is crammed full of magical texts and I’ve checked dozens more out of various libraries. I write spells and prayers as well as academic papers on magic.

Occasionally, outside sources are consulted on Charmed. Phoebe’s college education includes learning about spell-crafting; Prue researches the Triad and other demons on the Internet; and Leo, a white lighter (or guardian angel for witches), offers his knowledge of the supernatural. But the central text – adorned with a yonic symbol – is given as much power as religious books that condemn women.

One of the main reasons I turned from Christianity is the story of Genesis. I could not be part of a religion that punishes women – and all of humanity – for seeking knowledge. While the snake is free of biblical associations in Native traditions, I have also worn a snake ring for about as long as I’ve had my period because I believe that knowledge should be tempting. As an educator, I lead women to knowledge; I am the snake.

In this way, I am both yonic and phallic. But, as a witch, I have learned to prioritize the feminine, to value my bloody life.