Every day, I marvel at the ease of access to information on the Internet. Whether I’m looking up the filmography of an obscure actor or actress while watching TV or finding how to fix a plumbing problem on YouTube, the Internet has it all. But it’s definitely a different beast from what it was even ten years ago. Sure, the world as a whole has changed, but in some ways it’s also a case of same stuff, different day of the week. As a preteen I desired access to much information, but that required checking out a stack of books from the library or spending a chunk of cash I didn’t have on film and genre magazines. Nowhere was this more apparent than with information pertaining to that old taboo known as sex. Fragments and elements of sex were accessible on TV, but it was ultimately confusing indeed, like setting out to construct a He-Man jigsaw puzzle that winds up being a Smurf. 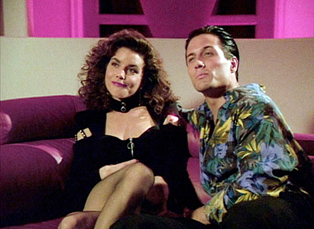 The late 1980s were a weird time in the television world. The expansion had begun in earnest from the basic setup of the networks and a few local syndicated channels (and PBS) to the world of cable. Fifty channels or more! And most of them showed the worst crap. It was what was on, though, so I’d like to think my tolerance for terrible movies had begun in earnest while watching Return of the Swamp Thing and Munchies. A lot of these movies contained nudity and were sometimes heavily and hilariously edited to be shown on USA and TBS. Even at a young age, I could tell that something had transpired and was missing post the male and female lead kissing.

The basic breakdown of this was:

Point A: Kissing and some clothing removal.

There were many theories and a lot of early middle school science being thrown around in those days as to what that question mark represented. Even though HBO and home videos granted us the occasional chance to see boobs and butts, it only gave us an impression of what sex looked like, and there was still something missing. When that eventual sex education class did happen, it’s hard to say whether it helped or made the problem worse. Seriously, try watching a sex scene from most late ‘80s/ early ‘90s R-rated movies and it’s mostly laughable, resembling floor gymnastics or performance art. With TV shows back then it was even funnier. 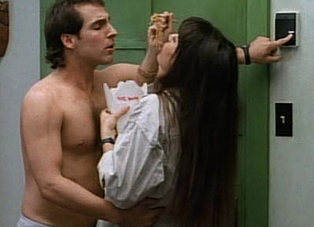 While a show like Married… with Children played off sex mainly for laughs, others like Silk Stalkings were trying to be sexy crime thrillers, without actually being able to show too much sex. Baywatch was silly cheesecake in slow motion, and over on HBO you had a show like Dream On, which was basically a sitcom with tacked-on sex scenes. It’s amusing that Dream On would eventually be shown in reruns on FOX late at night with the sex scenes edited out – it basically became a run-of-the-mill sitcom.

For the truly adventurous, there were those channels in the upper registers, which was like stumbling onto an alien world after being blindfolded during the trip in the spaceship. Channels like Spice and Playboy required subscriptions, so in the average household they were forums of sexy noises and blue or green skinned warbly people doing what must be that mysterious thing called sex. On a more horrific level it was pure static, and those sexy moans and groans turned into weird robot noises. Yes, a young man’s quest into exploring the mysteries of sex on TV was fraught with monstrous aliens and robotic peril! Of course there was also MTV.

Watching late ‘80s and early ‘90s music videos is where many of us received our first lessons about sexual imagery, and it happened in the weirdest of moments. From Cher straddling giant battleship cannons in the “If I Could Turn Back Time” video, Jason London’s water bottle spilling on his computer while he’s having cybersex with Alicia Silverstone in Aerosmith’s “Amazing” video, the sexy lady taking her clothes off in Billy Idol’s “Cradle of Love,” the rump shaking in Wreckx-N-Effect ‘s “Rump Shaker,” to all that wacky stuff going on in Madonna’s “Justify My Love” video. Of course, in the days before YouTube, it was random circumstance that you’d be able to catch a sexy video, although in the pre-grunge days it was hard to avoid them. Or, you could simply tune in to Club MTV (which later became The Grind). On those shows you saw a bunch of people at the closest they could get to naked air humping. Titillating yes, but unless you were going to randomly come up behind people and dry hump the rest of your life, it was not very explanatory. 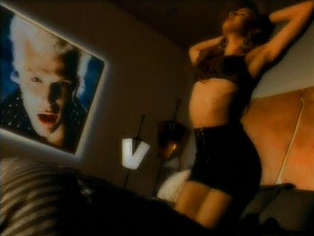 Eventually it all made sense, though. There was a wonderful (mostly lost) innocence to those early years of misconception about sex, kind of like a hero’s journey to discover what the hell the birds and the bees are about. Well, at least until sex ed class, which reduced sex to a level not unlike the titillation found in a TV instruction manual. No “sexy sax” music, no crazy candle lit room, no “Rump Shaker” (maybe a cigarette afterwards, though).

So the hero’s journey is now a hero’s Google search, and what this means is probably not all that much, (except that kids in 8th grade these days probably know a hell of a lot more about sex than we did at their age). The jigsaw puzzle now comes pre-assembled. Same stuff, different day of the week.