The long-awaited live-action Jem and the Holograms movie was, sadly, a flop. Critics derided the movie (which received an abysmal 20% on Rotten Tomatoes) as a “bizarre, cut-rate adaptation” and “a new low in the long, terrible catalog of movie versions that missed the point of their source material.” But is it really all that bad?

I pitted the original Jem from the 1980s cartoon television series against this upstart YouTube star from 2015 in a pop star battle to the death to see who is (forgive me) truly truly outrageous. 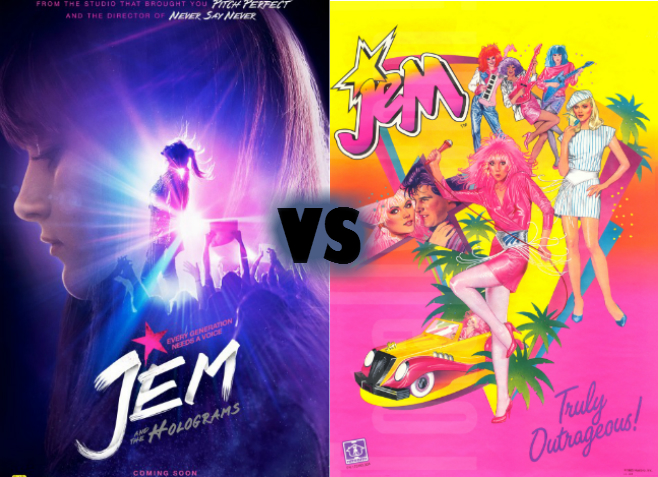 In the television series, Jerrica Benton is leading a pretty awesome life before she ever becomes the rock star, Jem. She is the owner and manager of her own company, Starlight Music. She even runs a foster home for wayward girls using the profits from her record sales.

By contrast, the live-action version of Jerrica Benton (Aubrey Peeples) lives a much more boring life. She is just a regular teen whose family is on the edge of financial ruin until a YouTube video of her singing and playing the guitar goes viral. However, her aunt/mother-figure is Molly Ringwald, which is cool. 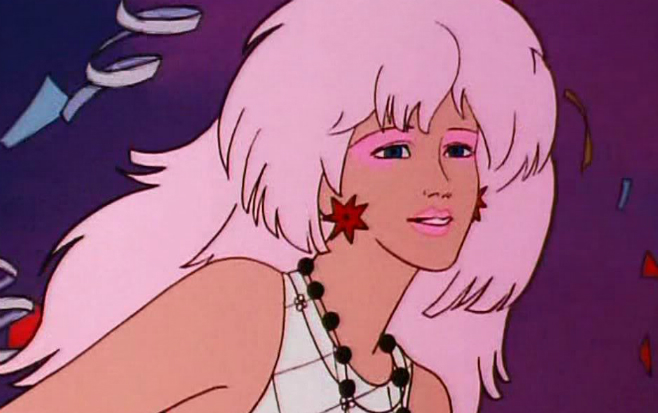 Cartoon Jerrica transforms into Jem by means of a holographic projection beamed out of her high tech star-shaped earrings (hence the band name: Jem and the Holograms).

In the film version, Jem’s disguise is more low-tech, coming from her aunt’s collection of old 80s clothes and wigs… So many wigs…

While this is a little less fantastical then the cartoon, it looks a lot more fun to cobble together a crazy costume then it does to paste a hologram over your regular old self. On the other hand, the cartoon Jem’s holograms are much more versatile disguises, and the more elaborate costumes, instruments, and stage dressing in the live action movie would be inaccessible to anyone without access to a high-powered music mogul, which takes some of the dress-up fun out of the proceedings. 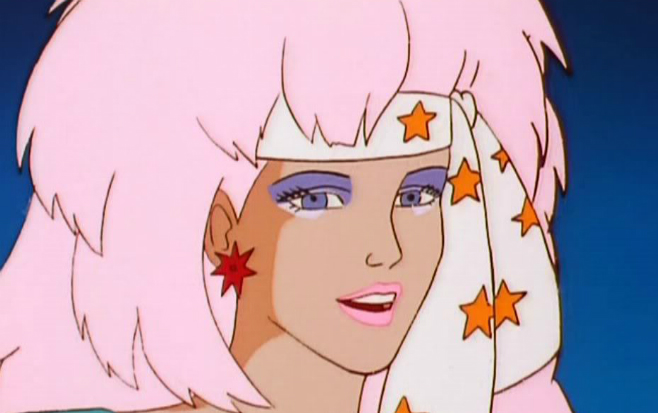 In the 1980s, the word “computer” often felt like it was pronounced with a capital-C. Cheap, regular access to gadgets with the same processing power and graphical capabilities that we have in our smart phones today would seemed like a techno-futuristic dream. Jem’s supercomputer Synergy was a god-like being with its own artificial intelligence, its own personality, and sometimes, its own agenda.

She was much more fun than the modern Synergy (or should I say S1N3RGY), who resembles a cross between an iPod and one of those robot dogs from The Sharper Image 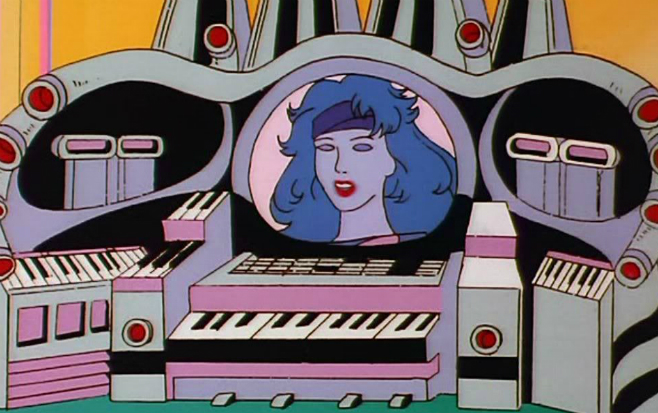 Jem had lots of competitors in the original cartoon, from the greedy Eric Raymond, who wanted to take over the studio with the help of his underlings Zipper and Techrat, to rival bands like The Misfits and The Stingers.

The live action film keeps the ambitious, money hungry record exec but recasts him as a her: Erica Raymond (played by a fantastically sour Juliette Lewis). She might be a snooty bitch, but you also get the sense that she has to fight for her place in a cut-throat music business that is under threat from Internet amateurs like Jerrica, which makes for a more interesting, more complex character. Plus, the mid-credits stinger featuring an over-the-top, live action version of the Misfits was rad as hell. 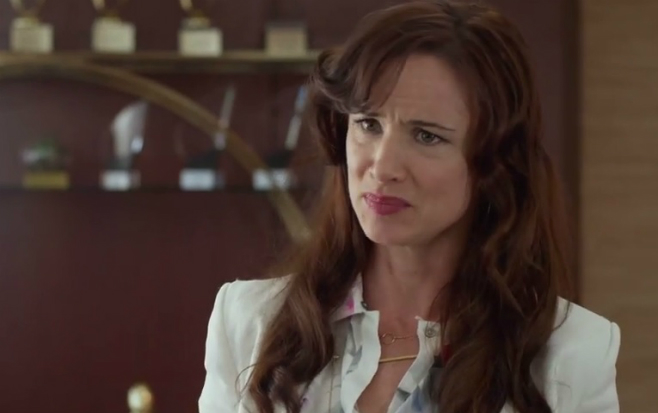 Everyone remembers Jem’s truly outrageous theme song. Go ahead and sing along with it. You know you want to.

But many forget that the show was packed full of original songs and music videos at a rate of three per episode. Of course, this means that many of these songs were terrible.

But as a kid whose parents forbid her to watch MTV, I remember feeling like Jem gave me a glimpse into a grownup world. A world of hack musicians, sure, but a grown up one.

Meanwhile the trailer for the Jem movie really pushed the happy-go-lucky pop song “Youngblood,” which is a fine song as Kids Bop-style music goes.

I found myself really enjoying Jerrica’s first YouTube tune Alone Together and her concert performances of “The Way I Was” and “I’m Still Here.”

But the problem with the musical numbers is that they highlight the modern Jem’s reliance on cultural images to construct what is supposedly her “true self.” This Jem is one part Katy Perry, one part Taylor Swift, one part Lady Gaga, and one part Sia. At the end of the film, she says that Jem stands for everyone who ever felt like they had something to say. But everything that Jerrica says, much like the film itself, is simply a remix of what came before. She is finally able to “be herself” but only because that self is bland and palatable enough to please the masses. 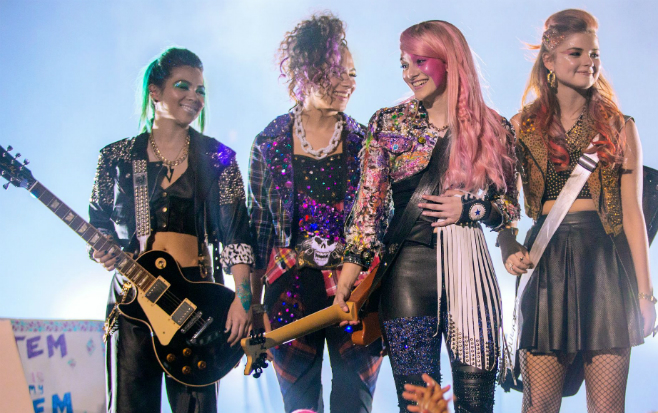 If the widely-panned film version of Jem and the Holograms had been about a generic all-girl band I suspect it would have been much better received. It’s really not a bad little movie. But it can’t overcome the powerful combination of nostalgia and 80’s weirdness achieved in the original.

Winner: 80s Jem and the Holograms 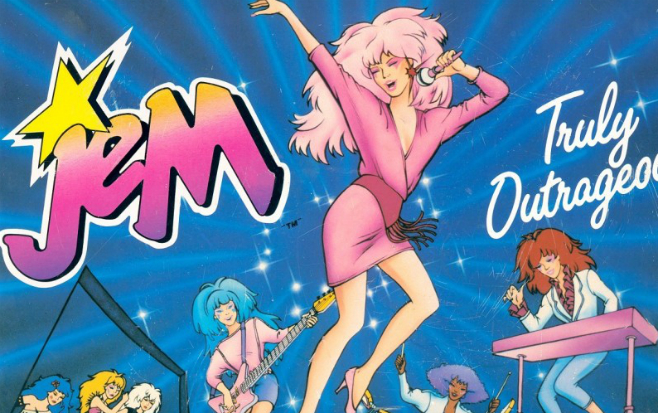 The Road to an Android Future goes through the Uncanny Valley