This is the true story… of eight strangers… picked to live in a house…work together and have their lives taped… to find out what happens… when people stop being polite… and start getting real…The Real World.

You know what it is. With one measly sentence, the world was introduced to what would become known as Reality TV. What better place for the format to debut than MTV (Music Television), a station that until shortly before The Real World‘s 1992 debut, primarily played new wave music videos? Well, that’s what the show’s co-creators Mary-Ellis Bunim and Jonathan Murray thought, anyway. We have them to thank (or blame) for 20 years of sex, booze and bitch slaps (not to mention my favorite reality TV image, Survivor champ Richard Hatch’s pixelated penis.) But the truth is, the network that today drags TV down to new depths with trashploitation shows like My Super Sweet 16 and, of course, Jersey Shore, was once a magnet for young (and weird!) artists with fresh voices.

Buzz is seriously experimental…video footage put together in a confrontational collage reminiscent of the film in A Clockwork Orange (but way less torture-y).

When MTV launched in 1981 with the iconic words “Ladies and gentlemen, rock and roll” and altered images of the Apollo 11 moon landing, it was the first American channel of its kind. The impact of its constant stream of music videos was quickly apparent as records by new wave artists (such as Men At Work’s Who Can It Be Now) that weren’t being played on the radio but were being shown on MTV began to ascend to the top of the charts. From the get-go, MTV’s creativity and daring was evident in their colorfully animated station IDs, chameleon-like logo, and on-air personalities known as VJs (video jockeys).

MTV quickly became a pop culture juggernaut just on the strength of its musical programming. However, by the late eighties, the station began to branch out as its ratings wavered. In 1987, MTV premiered its first non-musical program: a farcical trivia game show called Remote Control. 1987 also saw the premier of This Week in Rock, which eventually evolved into MTV News. The success of these programs led to the development of a great-deal of exponentially successful non-musical programming on the network, and the rest is history. In 2010, MTV officially dropped the Music Television tag.

The rise in MTV’s original non-musical programming to the detriment of its musical programming has been lamented for at least ten years. But it’s not all bad! In fact, for a long time, it was mostly good. What would American pop culture be without Beavis and Butthead or Jackass? A world without Cornholio would be a cold, desolate place. Even the early seasons of 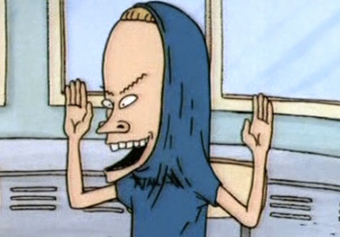 The Real World and Road Rules were fulfilling. In fact, MTV’s programming was consistently the most exciting stuff on television for a long time. There are more than enough forgotten shorts, cartoons and one-off series in MTV’s checkered past to fill the Network Awesome archives, all bizarre and, well, awesome. Case in point: Buzz.

Buzz was a project created by Mark Pellington (who would go on to direct Pearl Jam’s “Jeremy” video, an award-winning PBS poetry documentary and several projects for U2), Jon Klein (from MTV Europe) and Mark Neale, and was broadcast on MTV in America and Europe. The show is seriously experimental. Interview footage, on-screen text, projected images, music, photographs, sound effects, visual effects and all kinds of other video footage culled from who-knows-what sources are put together in a confrontational and kaleidoscopic collage reminiscent of the film Alex is subjected to in A Clockwork Orange (but way less torture-y). The participants in the Buzz project ranged from everyday people to out-there artistic heroes like William S. Burroughs, Syd Mead and David Byrne. It’s hard to believe that something so avant-garde was ever on television and it’s probably safe to say that nothing so avant-garde has been on television since.

Each episode of Buzz was broadcast only once. Today, the show only survives on dusty old home VHS recordings that are slowly making their way to YouTube. In its time, Buzz was hailed by critics as a great success, and if a show like Buzz can be forgotten, who knows what else is out there in network archives and home recordings? Episodes of Buzz were centered around different themes. Today’s episode, “Heroes”, the fourth in the series, examines the ideal of heroism – particularly through lengthy interviews with an injured soldier and a radical activist.

Practically since its inception, MTV has fielded accusations of sexism, racism, homophobia, manipulation of America’s youth and other terrible things. Surely, some (most, even) of these accusations have been spot on. However, as far as I’m concerned, any channel that would run a show as experimental as Buzz must have been on our side at one point. It is appropriate that Buzz would usher in the era of the music video director, when future movers and shakers in the film world such as Spike Jonze, Michel Gondry and David Fincher cut their teeth making music videos. There is no need to lament the vanishing of MTV’s artistic programming. Remember the heyday of the network with a smile and let sleeping Snookis lie. With the Internet at our disposal, we distinguished connoisseurs of the weird and good will thankfully be satisfied for a long, long time.

This story originally appeared on Network Awesome and is reprinted here in a slightly edited form with their kind permission. The author, Brian Correia is a budding computer scientist and aspiring writer from Boston, Massachusetts who couldn’t decide which hip-hop lyric to put in his byline. The top three, in no particular order, were as follows: “cooler than a cucumber in a bowl of hot sauce,” “spiced out Calvin Coolidge loungin’ with six duelers” and “I got techniques drippin’ out my buttcheeks.” He is on Twitter (@brianmcorreia) and Tumblr (brianmcorreia.tumblr.com) like the rest of the kids.

Rookie of the Year: Your Invitation to Twin Peaks Fest 2012