I came late to The Legend of Zelda: Ocarina of Time, so things that probably seem natural to others were deeply confusing to me. One such element was the Gossip Stones – mysterious, uniform artifacts scattered across the world of the game and initially without discernible purpose.

But I know their purpose, and I am telling you what I know so that if I disappear you will all know why.

You’ve probably seen them: egg-shaped rocks carved with the symbol of an eye. When you “speak” to them, you simply get a message saying: “This statue’s one-eyed gaze pierces into your mind…” If you hit them with a sword, however, they tell you the time. Strangest of all is their reaction to bombs. First they flash blue, then blue again, then red – and then rocket into the sky. 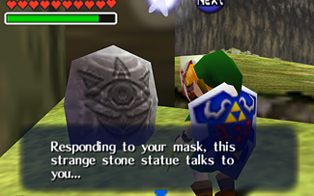 What can it all mean? Who built them, or otherwise how did they get there, and why are they all the same? How do they all manage to tell exactly the same time, and in 24-hour format no less, in a world without modern clocks and within such a short day/night cycle? And what’s the deal with bombs? When you pile up the evidence there is only one answer.

Gossip Stones are mass-produced alien technological probes, scattered across the whole planet and falling all over Hyrule. Their inscrutable “one-eyed gaze” is that of complex monitoring apparatus designed to gather information from all over the planet, while their time-telling function is an inbuilt diagnostic service. When they are stricken with fire, or hit by the Megaton Hammer, they distort, stretch or flatten before returning to normal, which indicates that they have powerful self-repair capabilities (I would argue for them being composed of nanosubstance whose structure is nested fractally, allowing it to reproduce itself as a whole from very small pieces). But when they are properly threatened (by explosives), they engage an automatic security alert and escape protocol, blasting off to where they came from.

This behavior in particular indicates that one day the stones’ makers will return to Hyrule. There would be no reason for the stones’ self-protection mechanism if they were able to transmit their testimony across space. Instead, we can surmise that stones that have activated their escape protocol remain in orbit, strung out across the sky like a glittering pearl necklace, waiting to be picked up when their mothership returns. Presumably the same protocol is used when they have gathered all the data they need, or when they receive the order to return; one day in the future, a thousand Gossip Stones will blink three times and then ascend in unison for collection. 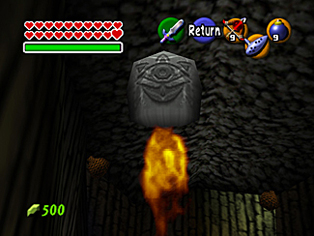 We don’t know much about these mysterious beings, but we do know their visit was a very long time ago. To the immediate west of Hyrule Castle Town, just across the moat, there is a bombable boulder concealing a hidden hole. Beneath is a small cave containing fish, loot and a Gossip Stone, which blasts off straight into the ceiling if you bomb it. The heavy, immoveable stone is unlikely to have been carried down here and couldn’t have landed here when it fell. So it must have been here hundreds or thousands of years ago – long enough for the earth to bury it by means of natural geological processes, until it was uncovered by some enterprising thief or manic miner.

Furthermore, we can hazard a guess at the date of its first discovery. Whoever dug this hole was probably quite surprised to find the Gossip Stone waiting there, and from the loot buried here we can surmise it wasn’t their original goal. But the prize in this pit is only five rupees – hardly enough to bother hiding in your sock in Hyrule’s current economy. To our estimate of age, then, we must add several hundred years to account for this severe currency inflation.

The stones, however, are not always silent. By donning the Mask of Truth, the player can access the information they have collected about the world. Since they’re rooted in place, the stones can only report what they have heard by listening in to the idle chit-chat of villagers and passers-by; hence their name. Yet how can it be that this mask confers such special access to the stones? It may well be a piece of equipment left behind by the aliens, or even a device back-engineered around alien technology by one of Hyrule’s ancient peoples.

Significantly, both the stones and the mask bear the crying-eye symbol of the Sheikah, OoT’s mysterious ninja super-race. Numerous magical items built by the Sheikah – like the Lens of Truth – bear the same mark, which is emblazoned all over the Shadow Temple. 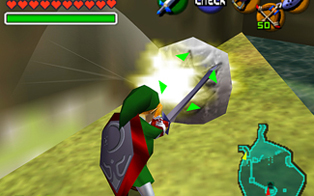 One option is that the Sheikah are in some way defendants or custodians of the Gossip Stones, but more likely they are simply one society that has managed to unlock some of the secrets of the aliens’ technology. Learning to use its powers, they have taken its symbol as their own, pasting it all over their clothing and their architecture. In essence, the Sheikah, the powerful defenders of the Hyrulean royal family through the ages, are a cargo cult.

So what are the aliens waiting for? There’s no real way to tell; maybe they ceded life to this planet in its earliest days and are waiting for it to evolve to a certain level, or maybe they are simply watching to see what happens. Maybe the mothership returns after a set period of time to see what’s up. But it’s also possible that the Gossip Stones are themselves part of some plan. If the royal family’s black operations division were to station oblivious soldiers at every Stone in the world, and order them all to strike them at exactly the same time, that would certainly send a message. We shouldn’t rule out the possibility that in some future Zelda, Link will be standing at the foot of a great flat-topped mountain, the sky boiling open above him, and on his Ocarina of Power play a special five-note tune.

Rookie of the Year: The Ultimate Pissing Contest