Every year, I take at least one baseball-themed road trip, and I’ve considered writing about it for Unwinnable one day in the distant future as my final Rookie of the Year column – the final Unwinnable column ever, in fact, as the sports geekery of it would cause our fearless leader Stu Horvath’s head to explode and the website to go offline forever.

But now, on Opening Day for both the Yankees and Mets, I have a baseball-themed road trip in mind that is not only Horvath-friendly, but one I would actually like to invite Stu to attend.

So Stu – and Chuck, and Ken, and Don and the rest of you dudes – what say we take a trip to Allentown, Pennsylvania, and watch the LeHigh Valley IronPigs, the Triple-A affiliate of the Philadelphia Phillies, play some good old-fashioned minor league baseball? 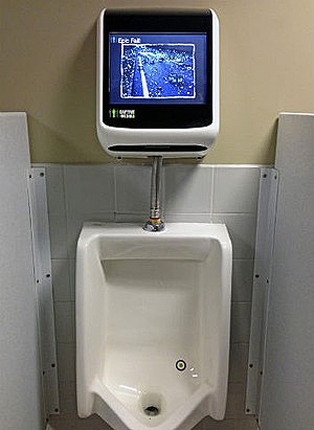 Let me sweeten the pot.

What I really want to do with you, Stu, is to take you to the men’s room and stand side-by-side at the urinals.

Whoa whoa whoa. Perhaps, Stu, you’ve now decided my final Rookie of the Year column has already run on the site. But let me explain.

In a press release last week, the IronPigs proudly announced that starting this season, “Coca-Cola Park will be the first sports venue in the world to feature a brand new revolutionary ‘Urinal Gaming System,’ allowing fans to interact with the world’s only truly hands-free urinal game controller …”

That’s right, Stu. I want to have a pissing contest with you.

Back to the release:

“When a user approaches the urinal, the video console flips into gaming mode, using patented technology that detects both his presence and stream. Algorithms then allow the user to engage with the screen by aiming in different directions to test their agility and knowledge.”

Stu, it’s your stream against mine.

We will battle in games “including alpine skiing, which allows users to speed their way through snowy mountains on a snowmobile while attempting to hit cartoon penguins (seriously).”

I can only assume that multiplayer games – perhaps even co-op titles (Ghostbusters-themed anyone?) – either already exist or are in production. But either way, I envision a line of Unwinnable men at the urinals, literally pissing away their afternoon.

You’re going to need it.

Matt Marrone once wrote a story about urinals for the New York Daily News. You can follow him on Twitter @thebigm.

Rookie of the Year: Into the Heart of Darkness
Previous Post

A Jumps B Shoots: Episode 9

The Mystery of the Stones