I’ve been thinking and writing a lot about loss lately.

So I’m glad to be telling a story to you today about getting something back.

It seems about time.

Growing up, I owned the greatest baseball glove ever made.

It was a Jim Rice-model outfielder’s mitt, made by Spalding, and with it I could catch anything.

Over the years, it became an extension of my left hand and an old friend as I battled my way to a Town of Poughkeepsie Central Little League championship, played catch with my father, went to sleepaway baseball camp in Williamsport, Pennsylvania and spent countless hours fielding grounders off the side of my house – more for fun than anything but with the added effect of my becoming an infield savant.

I played a mean first base, and although I had a perfectly fine first baseman’s glove, too, I never used it. It just didn’t stack up.

My Jim Rice Spalding was a fantastic, irreplaceable piece of leather.

So of course I lost it. 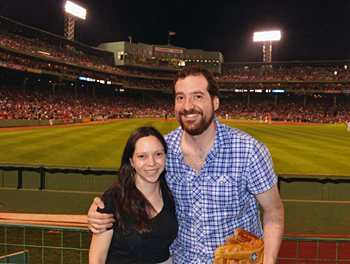 I was coaching tee ball at Bowdoin Park, teaching little kids to run down the first-base line, not up the third, and demonstrating great patience with them when they didn’t.

Wearing my glove was unnecessary, more of a prop than a tool, but I brought it anyway, and somewhere along the line I dropped it on the grass or in the dirt and got distracted by my girlfriend or any number of other things, and I drove away from the park one day without it.

When I realized my mistake, I drove right back. But it was already gone. The ranger station was no help; it never showed up in the lost and found.

I started wearing my first baseman’s mitt, but baseball just wasn’t quite the same for me after that.

I was missing part of my left hand.

A part I never, ever thought I’d get back.

I must admit I’m taking a little bit of poetic license here. I’ll never get the exact same glove back.

But I’ve found the next best thing – thanks to The Girlfriend of the Year and eBay, the former who suggested I try to find the same model online, and the latter, which helped deliver it to my door via West Palm Beach, Florida.

My new/old glove was lovingly worn in by a guy named Wallace – or so says the name written in marker on the side of it – not by me, but otherwise it couldn’t be closer to the real thing. If anything, it’s in better shape, but what matters is the way it feels on my hand, with that familiar, deep aged-leather smell.

And when you bury your face in it, it brings you back in time, to that naive confidence of youth when you believed you were unstoppable, that you were a machine with limitless energy, that you were born to play ball.

I am a Yankees fan but I never cared that it was a Jim Rice model.

The guy was a great ballplayer, even if he played for Boston. And after a few nights with my new/old glove, when I found myself just wearing it to watch TV after work, I finally got a chance to wear it to the ballpark, when I took The Girlfriend of the Year to her first game at Fenway Park.

As a Yankees fan, born in the Bronx, wearing my Jim Rice glove at Fenway, it’d be easy to see me as a traitor. But I didn’t care. I was in home run territory and no David Ortiz frozen rope could ever have gotten by me.

I was all set to use my glove again, to make the catch with the same ease I always used to.

It doesn’t matter that a ball never came close to me that night, that the only thing that struck its webbing was my fist.

It doesn’t matter because at a time when I’d lost a new part of me, had seen a pregnancy end prematurely, I had an old part of me back.

I’ve already told you in this space that I’ve never been more ready to be a father.

That’ll be my goal over the next year or two in a way that it never was before. It may cost me; it may mean that this baseball glove is my last eBay indulgence for a while. It may mean a lot more fear and stress and heartbreak.

And I’m scared. My stomach is in knots. Winter is coming.

But when I slip my glove on, I can’t help but think that when I do have a son or daughter, I’ll be itching to have a catch.

Throw it to me as hard as you can.

Matt Marrone hit .560 the year Juliano Fuel Oil went all the way. You can follow him on Twitter @thebigm.

Rookie of the Year: The Ultimate Pissing Contest

Out There, in the Darkness