Now I’ll begin the long climb toward salvation, or the aerial of death.

There’s a chaotic level of intentional ambiguity built into the script of Dear Esther, an indie game by thechineseroom, which plays wonderfully against the serene environments and direct, simple controls. The narrative in Dear Esther doesn’t contain direct allegories, but rather sets up loose, extended metaphors that communicate tone and relative meaning without committing to either. However, I’m assuming that the correlations between the stories of Saul on the road to Damascus, the wife murdered in the car crash, the lonely shepherd and the journaling explorer (among others) were not accidentally placed into the narration, and as such have some significance in how they relate to each other and the stoic island. As the narrator says, “All these things cannot, will not, be a coincidence.”

[T]he road to salvation is as muddled, incoherent and debilitating as the player’s journey.

In his article on Dear Esther, Ben Milton asserts that “Salvation is not the primary concern of Dear Esther. Understanding is.” I think Ben is close, but he’s missing the critical point that ‘understanding’ (Not the perfect term. I’ll come back to it. Promise.) is a kind of salvation, or is at least perceived that way. In his first monologue, the narrator says, “I return each time [to the island] leaving fresh markers that I hope, in the full glare of my hopelessness, will have blossomed into fresh insight in the interim.” Insight is in pursuit, though the method is poorly aimed.

In the Book of Acts, chapter 9, Saul, who later becomes Paul, is on the road to Damascus, a place in which I’ll argue that Dear Esther is metaphorically placing its various protagonists. The narrator comments, “The phosphorescence of the skid marks lighting the M5 all the way from Exeter to Damascus,” relating the site of Esther’s car crash to the site of Saul’s sudden blindness. The cliff walls (and Acts 9:3) read to the player, “As he neared Damascus on his journey, suddenly a light from heaven flashed around him.” For those unfamiliar, this is the scene where Saul, whose purpose for going to Damascus was to persecute Jews who had become Christians, is stricken blind by God. He’s led by some other members of his party to Damascus where, after three days of blindness and fasting, he’s healed by a Christian church member and converted to Christianity. He goes on to become one of the most prominent champions for the gospel of Jesus Christ in history. 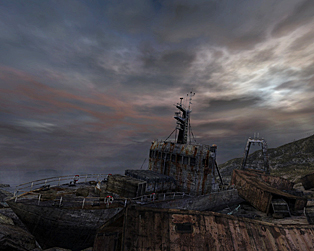 Damascus is a site of salvation, and the road to Damascus is a site of supernatural intervention and affliction that leads to that salvation. Were it not for the events on the road, Damascus wouldn’t have any importance in this context – the onset of blindness, hunger, and thirst are a crucial component in Saul’s faith. Salvation, then, is marked by sight and satiation.

Jumping back to the island: I believe the ending of Dear Esther to be an act of purposeful suicide, where the player-character jumps off the aerial and becomes a gull only by means of death. Unlike the common perspective on suicide, this appears to be a rationally motivated gesture instead of an exeunt sigh. I say this because the last monologues end with the same phrase that the player hears whenever he wanders too deep into the ocean (effectively dying). “Come back!” The admonition in that phrase seems to imply that the writer, Dan Pinchbeck, is advocating that the player not give up but continue to struggle through the infected legs of the human experience. Simultaneously, it’s a call to dear Esther, who has ascended from the island. “I will look to my left and see Esther Donnelly, flying beside me. I will look to my right and see Paul Jacobson, flying beside me.” The dead, like the player-character and narrator in the end, have become gulls who can escape the island.

This begs the question, “Why?” – especially in the context of Christian salvation, but also in the interest of avoiding pain and loss. Why shouldn’t we just animorph into death-gulls and fly away from the island and its ancient dead cattle and car wrecks? I don’t think the game provides a clear answer, which follows for thoughtful literature. The only perceived benefit of staying on the island, of continuing in the shepherds’ struggle, might be to communicate something about the nature of that struggle to those coming after. Whether that makes it more bearable, I guess, is irrelevant.

The unmistakable emotion of suffering in loss pervades the monologues as well as the emergent story. The game begins in a literally broken home, funnels through a shipwreck, an abandoned cottage, several small shanties, caves and cliffs covered in ritual (almost sacrificial) markings and ends at a wind-beaten old radio tower. Then there’s the not-so-subtle pile of car parts in the cave by the sea, the smashed female portrait, the shattered flashlight and the submersed visit to the crash site on the underwater road from Exeter. The essential controls in Dear Esther even feel like a study in handling loss. What other first-person game has taken away so much player control, leaving only movement and sight? 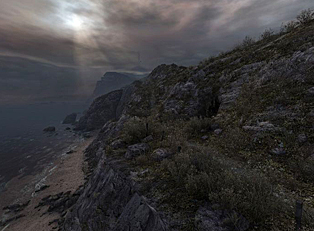 If, then, the crash and Donnelly and the narrator’s infected leg are the curse, then the end, death, or some kind of ascension, must be the cure. This may seem directly at odds with the Saul story parallels, but really his salvation is a kind of death unto itself. He even writes later in a letter to the Christian church in Rome that “we were buried therefore by baptism into death in order that… we too might walk in the newness of life.” Again, death leading and salvation.

And in a similar vein, the “understanding” or surmounting of the suffering in loss can only be overcome by an agent, like death, that completely eradicates the former self. To live with loss is to never overcome it, to let the infected wound fester while scoring warning signs in speech and habit, giving others a signal of the disease, so to speak. I wouldn’t presume to say that Pinchbeck is advocating a Protestant Christian solution to this affliction, but I think he’s using it as another picture of salvation – one that doesn’t end in biological death. If Dear Esther is clear about anything, though, it’s that the road to salvation is as muddled, incoherent and debilitating as the player’s journey.

When Saul loses his sight and is commanded by God to continue on to Damascus, he relies on his non-blind companions to lead him there over the course of three days. Allow me to pretentiously follow that bible story with a quote from Tolstoy: “Art is a microscope which the artist fixes on the secrets of his soul, and shows to people these secrets which are common to all.” His point, which I believe is also a contention of Dear Esther, is that art can teach consumers something real about themselves and the human experience, and often better than merely pondering on the human experience itself. Why else would it be a secret? 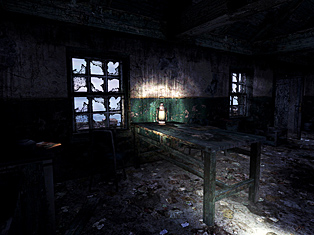 I see Saul’s companions as the clever folks at thechineseroom, the studio behind Dear Esther, who have some insight that the player lacks and is revealing it to us without showing us directly. It’s a kind of understanding that can’t be communicated directly. I’ll go ahead and be blasphemous and try anyway.

To lead the player, the developer creates a world. “I will stash the last vestiges of my civilization in the stone walls and work deeper from there.” In this instance, the world is an island. The player’s only agency is movement and sight, which is purposeful to raise the question, “Who is the artist?” I often consider the player a kind of participatory artist in games, in the same way that I consider man an artist when he molds some piece of the earth (paint, stone, metal, whatever) into a representational structure. But aren’t all men just re-appropriating a world that’s already been constructed, according to the rules and laws of the universe they inhabit?

“When someone had died or was dying or was so ill they gave up what little hope they could sacrifice, they cut parallel lines into the cliff, exposing the white chalk beneath.” Well, spoiler alert: we’re all dying, always. Repurposing the cliff for our own purposes sounds like art to me. For the narrator, this art is a warning to stay away. To those who created the island, to the developers, to God, the lines are an artist grasping in the dark for the aforementioned salvation. Some may interpret the endeavor of art to be the “art as immortality” compulsion, which makes sense given man’s ego, but doesn’t hold in Dear Esther. The ending monologue admits that salvation, not immortality, is the goal: “They will leave white lines carved into the air to reach the mainland, where help will be sent.”

Then there’s the matter of the glowing messages and diagrams across the cave and cliff walls, also a kind of art. The chemical compounds make up some basic sugars and alcohol, and the mechanical diagrams, I gather, are the pieces to an anti-lock brake system. Acts 9 also makes its way onto the cliff walls. All of the wall writing is medicinal, maybe even preventative, of a larger sickness or problem. Right before they explode across the walls of the cave, a rock face reads, “Behold, Damascus is taken.” Maybe the act of creating this revealing, exploratory art is Damascus, or ascension, to some. 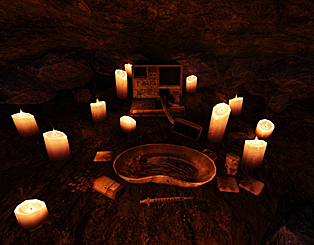 There’s a statement here about the efficacy and legitimacy of faith and religion, seemingly implying a kind of useful ignorance. For example, when the shepherds’ bible was taken from them the narrator asks, “Did they assign chapter and verse to the stones and grasses, marking the geography with a superimposed significance; that they could actually walk the bible and inhabit its contradictions?” To inhabit the bible like they could inhabit these chemical and mechanical diagrams, they create representational art. It warns, it heals, it is how they are remembered and how they guide future inhabitants. Maybe they even stick around to see it all unfold.

With a broader stroke, I think Pinchbeck and the rest of thechineseroom hope that Dear Esther is an education in letting go, summed up succinctly in the player’s non-agency. If they had wanted, they could have made Dear Esther a movie with no question of control, but the choice to make Dear Esther a game was in itself a statement about the human experience. We are not creators, and we are all diseased to die. Our art, our education, our literature, our science and our relationships are attempts to take Damascus, to wipe the scales from our eyes and see some existence higher than the one we’ve been born into. Without leaving the struggle altogether, it seems, the prescription is a sorrowful contentedness. Or, as the narrator puts it, “I am revising my options for a long and happy life.”

No Man’s Sky: More Ambitious Than We Thought?
Previous Post