It’s usually the first order of business when I get my hands on a new videogame. The tutorial, whether an on-screen prompt or (in the case of a game convention or industry event), a living, breathing human, is instructing you. Run forward to the waypoint. Press X to jump. Press Square to attack. Hold down the trigger to fire. Or accelerate. Or whatever.


I know I just started the game. Let me screw around a little.

Jump. Attack. Shoot. It’s a familiar vocab list we know by heart without study aids. Words maybe I don’t want to follow to their inevitable conclusion just yet. What if I want to run around in the starting area looking for invisible walls? What happens if I turn around and run the other way down the corridor? In modern games it’s usually nothing – an empty space. And yeah, I know I just started the game. Let me screw around a little.

I don’t know how common this is among players. To be fair, you’re not really breaking anything; it’s more like testing the strength and limitations of any game’s design. Playing a big, polished triple-A title, I’m not really expecting to find anything but the proverbial brick wall when I make that run backwards. Why would I? Linear design is generally painstakingly made to play out in exactly a specific way. A non-linear sandbox is only as big as the range of the player’s abilities. Without progression, or the illusion of it, playing a game becomes a state of limbo.

This happened to me the first time I played Journey. My red-scarfed wanderer had made it past the game’s initial stage, a series of windswept markers in the desert, only to come across a new oasis with a cascading, flowing stream of sand. It was obvious what I had to do – activate the scrolls scattered throughout the dusty vista to activate a bridge to get to the next area. I wanted to explore my surroundings. In a vast desert, where could I go? Flashbacks of Uncharted 3’s Rub’ al-Kali. I knew the invisible walls were close.

I explored anyway. I made a perimeter of the area, carefully observing the geographic regions where the wind picked up, my redscarf tumbling gently backward to land in a lighted puff of dust. I found the secret murals in the area, one of them underneath the gushing sheet of sand, and decided that yes, I would attempt to climb up the hill hidden beneath it.

This was borderline breakage, since the game developers clearly didn’t want my redscarf back there. I trundled slowly up the hill’s steep grade – or damn well made my best attempt as the camera jittered and stilted, getting caught on level geometry as I panned it around in a jagged arc. The combination of moving forward and adjusting the camera became a bizarre rhythmic dance that gradually lifted my redscarf – not quite beyond the ground but just seemingly suspended above it.

I would get stuck sometimes and have to maneuver my direction this way and that. Before long, the redscarf had almost ascended the invisible hill. Then I abruptly found solid ground, above even where the level was supposed to take me. I didn’t want to fall back down, so I tentatively walked a bit forward, marveling at the coded edges of the area. I’m surprised I didn’t fall into a loose seam in the world – instead of simply working as a potential fail-state the next cutscene triggered. Somehow (probably by accident) breaking the game became a liberation from limbo. 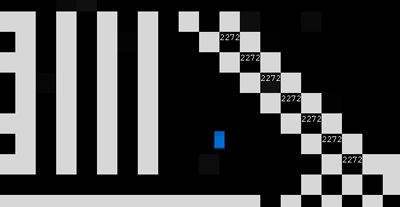 Alphaland is an interesting theoretical case study on one’s existence outside of known parameters. Looking like it would be at home running on an old Tandy computer, you control a blue block navigating rudimentary level geometry. It looks like a platformer. The first screen is a short maze with a collectable item at its end.

Actions in the game’s code are shown intentionally on the top left of the screen: on ground. Jumping. Falling. Go to collect the object at the end of the maze and you fall through a tear in the world. Down, down. Past scrolling screens. Object outside frame. Then you’re in the game’s code.

As you wander the irregular landscape of the game’s inner workings (it resembles a bar code) it isn’t entirely clear what the game really is. What first seems like a simple minimalist platformer (gray blocks kill, the codescape is level design) develops into something more.

“Who am I?” text whose origins are unknown appears on the screen after a few minutes of progress. “Am I awake?” “Am I broken?”

Attempting to break game parameters can be interesting, even if it doesn’t always yield actual results. For me, there may be an element of simply not wanting to do something because there is something telling me to do it. Yet through the self-imposed limbo I’m creating there’s an even more valuable byproduct: personal ownership.