I have, as my phone’s background, a stylized and quite noticeable “N7” logo — “N7”, of course, being the military designation of Commander Shepard in the Mass Effect series. The logo reportedly comes from a type of skiing equipment — a designer at Bioware owned a pair of Look Nevada N77 ski bindings and simply removed the third digit. In Mass Effect’s Systems Alliance military, the letter stands for a branch of service, while the number represents a level of proficiency. “N” means special forces, and “7” represents the highest level of proficiency.  I know all this because I am an absolute fool for this series.

Other people, fools as well, will occasionally come up to me when I’m out in public. They’ve seen the logo and want to talk about it. There’s an awful lot to talk about when it comes to Mass Effect — favorite characters, what the series has to say about themes of friendship and consequentialism and racism, decisions I made vs. decisions you made — and the series is so richly-realized that everyone seems to notice something different about it. I rarely had the same “Oh, have you played Mass Effect?” conversation twice.

We didn’t just crave disappointment – we were its physical embodiments. Losing made us sympathetic, noble, rare.

Until, that is, about a year ago. Then, they all were about the same thing.

Can we establish some boundaries here, before we continue? You may have liked the way Mass Effect 3 ended. I didn’t. I don’t think you’re an idiot. I don’t even necessarily think you’re wrong. The damned thing has been analyzed and hacked apart and deconstructed to the point where it’s impossible to view it in its original context without your brain automatically applying annotations everywhere, so I won’t get into that. Here’s where I’m coming from: the game in your head is never going to be as good as the game that you get, but that’s to be expected. Where you run into trouble is when the gap is too great — either your expectations were unrealistic, or the game failed to deliver, or both. The Mass Effect 3 ending in my head and the one I played were irreconcilable — it was roughly like watching the last five minutes of 2001: A Space Odyssey spliced into the final reel of Return of the Jedi.

I like to think I’m being pretty reasonable in this point of view, but it wasn’t always this way. I introduced at least three people to the Mass Effect series, prior to Mass Effect 3. One of them was my roommate at the time, Jason. Jason’s normally into FIFA and NCAA Football (with a soft spot for Assassin’s Creed), but he got hooked on Mass Effect from watching me play through a single conversation in the first game. I’m pretty sure it was the one you have with Ashley Williams about space racism. He whipped through the first two games in a matter of months, and was in line with me for the midnight release of Mass Effect 3.

I’m still the bigger nerd, so I finished the game a few days before he did. He asked me how the ending was, and I made a face.

“You’ll have to play it for yourself,” I said, and he did. I was sitting next to him as his Shepard staggered into a beam of light at the urgings of a ghost child. We waited until the post-credits scene with Buzz Aldrin (whom I refuse to criticize, because he walked on the moon and thus has carte blanche for anything up to and including arson), and then he turned to me. 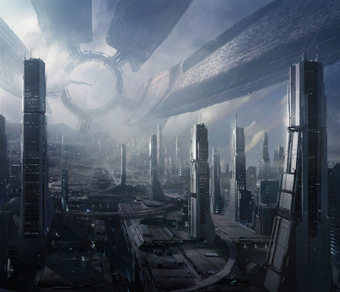 “But wait, what about…” he began, and that was it. I nodded. He was stuck in the same spiral I was. I was prepared, of course, with videos and articles and that Xzibit meme that found perhaps its most relevant use in summing up the series’ final moments, but he would have headed in that direction regardless. Jason’s a living rebuke to the idea that the relentlessly physical (he plays rugby, skis at frankly irresponsible speeds, and has actually pulled off that archery trick where you split an arrow down the middle with your second shot) are without depth. He’d joined the “Retake Mass Effect” group on Facebook within the hour.

I watched with something approaching glee. Honestly, were you an outside observer, you’d think that I was secretly hoping the game would fail.

Back in 2011, Scott Pilgrim creator Bryan Lee O’Malley tweeted a question: “why do nerds crave disappointment?” He was talking about fans of Harry Potter nitpicking small details that apparently ruined their heretofore-cloudless enjoyment of the series, but it’s relevant beyond that. This was a few months after Dragon Age II came out, mind you, so I was already somewhat receptive to the idea that some pieces of media are doomed to a fate of endless mockery and contempt. Some people, it’s true, will never be happy.

They’re a minority, though. Most of us want the things we enjoy to be good. We become fans of things for a whole host of reasons, but I feel like what we have in common is the desire to experience that big rush of dopamine when all the threads come together. We want to be brought to a height, and then to float down from it so gradually that we’re practically on a new level.

This isn’t even restricted to your traditional nerds. I’m from Massachusetts, which means I’m contractually-required to be a Red Sox fan. I don’t think there’s anything particularly special about being a Red Sox fan – I certainly don’t think I’m unique for being one – but for a very long time, the team was defined by their constant failed attempts to win a World Series. Every year, it seemed, would bring new promise, but every year saw that promise thrown away in seemingly-endless ways.

There was a certain line of thinking that said that Boston fans actually enjoyed this state of affairs – that we’d been defined by failure for so long that any change in the status quo would shatter our collective identity. We didn’t just crave disappointment – we were its physical embodiments. Losing made us sympathetic, noble, rare. Winning a World Series would make us common.

All that was shoved off as the worst kind of piffle in 2004. Winning rules. The night my team beat the Cardinals in four most drama-free games, I ran around my Illinois campus with like-minded ex-pats, cranking a noisemaker and singing and feeling happier than I’d been in ages. The idea that I’d somehow lost something in all of this was absurd. What was I missing?

To win is to gain.

On the one-year anniversary of Mass Effect 3’s release, Bioware came out with a final piece of downloadable content, Citadel. I played it. Tonally, it’s like a late-season episode of a popular ensemble drama, with an absurd plot that requires the engagement of an entire cast of familiar characters. It’s the most fan servicey thing I’ve ever played, occasionally cringe-inducing, and sometimes powerfully dumb.

The fanservice is well-placed; Citadel is a send-off for the series, after all. The cringes come from a place of love; Citadel knows when to make fun of itself. It’s dumb only in a pulpy, action-movie way; Citadel doesn’t take itself too seriously. One of the criticisms of the original ending was that it abandoned its focus on the characters, but Citadel knows that it’s the last time players will interact with Wrex or Garrus or Miranda, and thus gives them ages in the spotlight. Hell, if you structure your game in such a way that Citadel is the last thing you play in Mass Effect 3 (there’s something of an idea that Citadel is secretly the real “ending” – it feels like it was supposed to be a kind of epilogue, regardless of when it actually takes place in the narrative), the series literally ends on a high note.

I frequent more than a few Mass Effect forums, and the reaction to Citadel is kind of amazing. These are places that have been vicious (whether rightfully so or not) to the game and its developers – we’re talking thousand-page threads that spring up every few days with new laments about what might have been – but that’s mostly gone now. People are happy about Mass Effect. It’s a jarring change from the usual bitterness, but jarring in a good way.

Some people crave disappointment, but most of us use it as a shield. What happens when that height we were reaching for – that catharsis – turns out to be an illusion? I expected something out of Mass Effect, and when I didn’t get it, where did that leave me? Negative emotions aren’t the worst thing we can feel. The worst thing we can feel is nothing. Disappointment’s a kind of a refuge in that case, a rearguard action in our hearts that we’ll fight for as long as we need to. It’s either that, or confront the fact that maybe we don’t care all that much anymore about that thing we used to love.

I used to warn people away from Mass Effect. It demands your investment, I’d tell them, and it all adds up to nothing. You’ll just be disappointed.

Telling them to give it a shot is so much better.

Joe DeMartino is warily optimistic about Dragon Age III, believe it or not. Follow him on Twitter @thetoycannon.