Just over a month ago, I had the privilege of watching Tetsuya Mizuguchi play entire stages of Rez and Child of Eden on a stage at ACMI during Melbourne’s Freeplay festival. It was fascinating to watch a developer engage with his own game. Seeing the specific way Mizuguchi played his own work felt like an insight into the creative process that made these games; he played the way he envisioned they would be played.

Most interesting was how Mizuguchi clearly did not care at all for his score. When I play Rez, I rarely ever send off my volley of shots until I have locked onto the maximum 8 targets possible for the best multiplier and loudest noise. But this didn’t bother Mizuguchi. He would lock just one or two enemies. Sometimes he would lock onto none, and just tap away at nothing to create empty hand claps. Mizuguchi wasn’t interesting in playing the game well; he was interested in composing it well. He only cared about how he was able to make a good sound with his actions – a fleeting, temporary song that only existed for the moment he played before disappearing into oblivion, never to be perfectly recreated again.

What matters is that you get lost in your own act of creation. That is it. Starbloom is relaxing and, in an entirely positive sense, mindless.

It was an important lesson about what Mizuguchi’s works, with their meshing of aural and visual stimuli, are trying to achieve. And it helped me greatly this past week while I played Shadegrown Game’s first release, Starbloom, which asks you to turn entire solar systems into songs. Planets orbit a sun, and launch off rings of blooms at various intervals for the player to collect. Doing so gives you points; more importantly, it creates sounds.

Mechanics are simple enough. As the planets set off their blooms, the player draws quick circles with their finger to collect the bits. As each stage (or song) progresses, the camera zooms out and more planets come into focus, setting off more blooms to be collected. To play is to swirl your finger around in circles, collecting what you can.

As you play, aural compositions build and build, with different planets’ blooms supplying rhythms, bass and beats. No song stage will sound the same on two different plays, but each has been put together in a way that it can’t help but evoke a certain mood. Every solar system is drenched in a personalized atmosphere in that way, with levels highlighting Shadegrown’s masterful skill at synchronizing and juxtaposing an aural landscape with visual and ludic ones. (Those that have been following development of their ongoing Planck project will no doubt find this reassuring.)

Two different modes, Creation and Destruction, create songs of drastically different tone. In the former, more planets appear as the stage progresses, creating more blooms that allow for a denser aural landscape from the player’s inputs as each song builds up towards a final crescendo. Conversely, in Destruction the solar system’s sun grows continuously, consuming more and more planets as the game progresses. Instead of increasing in polyphony, these songs start out blasting and slowly peter out as more planets are consumed by the sun and more blooms are removed from your repertoire, until there is nothing but silence. 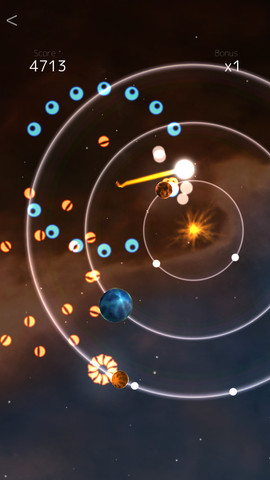 The game has a points system and score multipliers, but they feel more like they are there in order to appease Apple, perhaps, than to be cared about by the player. Your score doesn’t matter. Your multiplier doesn’t matter. What matters is that you get lost in your own act of creation. That is it. Starbloom is relaxing and, in an entirely positive sense, mindless. It wants you to simply swirl around its celestial bodies, getting lost in the noises of its universe.

But I find it so hard to put myself into the mindset I saw Mizuguchi melt into when he played Rez. It is so hard to forget about those numbers, to forget about that multiplier. My impulse to play “well” is made worse by the less-than-tight controls. Rather than just collecting whatever blooms are where your finger touches, touching instead moves an on-screen avatar to your finger’s position. There is thus a split-second lag while the avatar rushes across the screen to be where you are, creating a latency less than ideal for creating music. Instead of gathering blooms, I often find myself doing frustratingly silent laps of them. Instead of losing myself in the music, I instead spend much of my time consciously trying to get back on top of things, of trying to get my avatar to go where I need it to go.

Starbloom doesn’t want to be played; it wants to be composed. When it works, it is a beautiful experience of creating fleeting, personal songs, much as Mizuguchi did when he played Rez. But the avatar that is your intergalactic conductor’s baton is laggy and clumsy, and often refuses to make the perfect song that your finger intends. Regardless, the music you create – be it by intention or chance – is music worth listening to, and that is an achievement in and of itself.