Much like Douglas Wilson’s Johann Sebastian Joust, former BioWare programmer Henry Smith’s new iOS game Spaceteam embraces the play that happens on this side of the screen, between players. What’s happening on your phone’s screen is largely only there to facilitate the experience between the players as they yell commands at each other in a collaborative attempt to avoid being consumed by an exploding star. 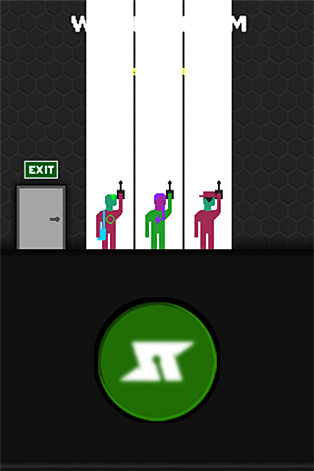 Whereas Johann Sebastian Joust has players competitively swing limbs at each other, Spaceteam is cooperative and non-contact. But that shouldn’t imply that it isn’t as stressful, frantic and as likely to force you into yelling and cursing at your friends.

Two to four players are together on a space ship, each sitting at their own panel of knobs and buttons and sliders and switches that need to be constantly fiddled with as per the ship’s commands in order to not be consumed by the intergalactic fireball on your tail. The only problem is that the commands the ship gives you are probably not for your own panel; most likely they belong to another player. So you have to tell them what to do because they can’t see this command. So you shout out “Turn the flabbogabber to 10!” But, at the same time, they are telling you to “Pay the taxes!” and then there is an asteroid and another player is telling everyone to shake their damn devices already.

The true beauty of the game is how things escalate. The first few stages pass relatively easily. But then you might encounter your first magnetic storm (causing panels to come unhinged and spiral around the screen, requiring you to drag them back into place) or a slime containment malfunction (causing green slime to drip down and obscure your panels, requiring you to wipe them clean), and all of a sudden it is like trying to engage in a heated intellectual debate while also spinning plates.

At the same time, panel element names are getting longer and longer, and you might have a 10-syllable dial that needs to be cranked to 11. Or, for increased hilarity, they might not even have names but pictographic symbols, causing you to shout “Little man to five!” or “Downstairs Arrow to off!” Perhaps the greatest risk to your safety is not being able to bark commands over your own laughter.

It’s a fine balance between listening to your companions and making sure they heard you. It can be easy to lose your patience and get mad. I’ll confess to having gone off at my partner for not flicking a switch that moments later I realized was on my own screen. It’s all part of the fun of trying to work together in an increasingly doomed scenario.

But written words don’t really do justice to the fraying sensation that is trying to stay on top of a game of Spaceteam. Instead, here is a video of me and my partner playing a game and slowly crumbling beneath the pressure:

Things escalate further when a third or fourth player is added to the mix. Now you are getting commands and you don’t know who needs to hear them. Instead, everyone just shouts into the space between and hopes they end up at the right ears. 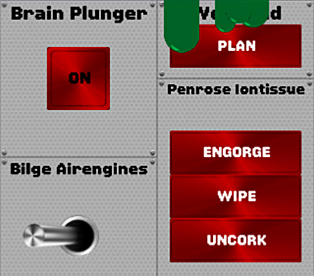 Perhaps the biggest hurdle the game faces, though, is finding multiple people with the app on their iOS devices in close proximity to each other. But the game is free (with an in-app purchase to unlock Game Center and to actually give Henry Smith his well-earned dollar), so convincing a friend to grab it shouldn’t be difficult. The game can also be played across two devices with the same Apple account, if you own an iPhone and an iPad. It also works over Wi-Fi or Bluetooth. Anything that would stand in the way of a local multiplayer iOS game actually working has been considered here.

The attention paid to making sure the game has as few barriers for players as possible is indicative of just how much care and polish Smith has put into this game. From the perfectly crafted tongue-twisting words that you have to shout out, to the little touch of having to wipe away that damn slime, Spaceteam is exemplary at how to make a videogame fun on this side of the screen.

Much as Johann Sebastian Joust makes gesture controls work by not needing a computer to act as a referee, so does Spaceteam make voice controls work by not needing the computer to understand what you are saying. Instead, it’s the other players who need to understand you. The game’s words and commands are perfectly crafted to twist your tongue and your mind while your fingers are still distracted with everything happening on the screen. This has been a phenomenal year for iOS games, but few have facilitated such a pure sensation of play as Spaceteam.

Final Fantasy X-Ray: It’s Stories All the Way Down