Len Wein was the editor of Alan Moore and Dave Gibbons’ original work on Watchmen, so he has a more direct connection than any other writer involved in Before Watchmen. The work he turns out, therefore, reads as more authentic and captures the feel of its master strategist, as Wein takes his turn at telling the story of the world’s smartest man.

Ozymandias is word-heavy and a dense read. It hearkens back to Alan Moore’s tightly-packed narration in Watchmen, but the story is told by Adrian Veidt the day before he murders the Comedian. In one issue, Len Wein is able to bring readers up from Adrian’s childhood to his current position as head of his own corporation, as he sits in front of his wall of televisions in his Arctic retreat. 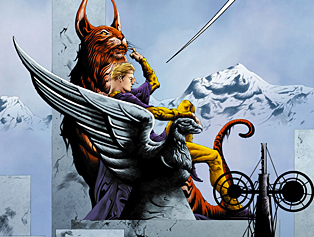 Wein captures Adrian’s voice perfectly, and I don’t say that lightly. I went back to the source material and could read, in Ozymandias, the voice Alan Moore had given him in Watchmen – a pretty impressive feat, in my opinion. What’s bothersome, however, is the added detail to Veidt’s life. His reasoning for learning martial arts boils down to fighting off stereotypical schoolyard bullies who steal his lunch. Additionally, there’s a love interest that has a pretty significant impact on his future, but this doesn’t mesh with Veidt’s persona. The overall narrative is excellent. It’s the filler that trips up the story.

Fans of Stephen King’s Dark Tower comic will immediately recognize Jae Lee as the issue’s artist. In this comic, however, Lee is a bit more detailed than he was in the Dark Tower series. Background is not eschewed for murky setting. Several panels are still missing major details, but these are few in the entire book. Lee also plays around with panel construction more so than I’ve seen before. The spindly character designs can be a bit distracting, as is the vague colorization, but the book is better looking than some of Lee’s other work.

What I’m more interested to see is how Wein creates an original story. Now that he used all the material from Watchmen, he’s free to run with his own iteration – but it has to stay true to Moore’s vision. This doesn’t seem like a major challenge to Wein, given the narrative voice, but if he’s going to fill in the gaps with lost loves and playground thugs, the book will quickly lose its luster. 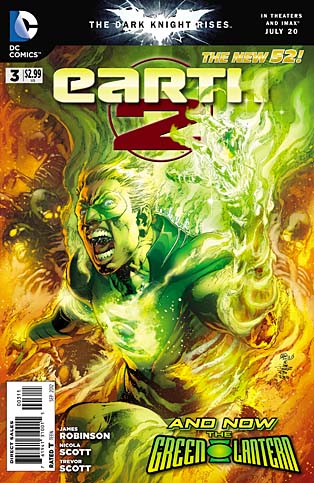 Writer James Robinson delivers an issue that speeds right ahead, heedless of the tone established in the previous comic. Whereas Robinson spent a lot of time trying to make the relationship between Alan Scott and his boyfriend Sam feel real, he finds a way in this issue to put that aside in order to get to the point. From the beginning of Earth 2, it’s clear that James Robinson has a story to tell, and he wastes no time in delivering.

Robinson wants to get to the crux of his arc, because he drops all the emotion from the previous issue and focuses on churning out a story that sets up all his key players. While Alan Scott was ready to marry his boyfriend Sam in the last issue, he spends almost no time mourning his death. The one minor emotional connection is hollow, and while Scott couldn’t keep his hands off his lover last issue, in this one he’s ready to move on before Sam’s burned body cools.

The moments between Flash and Hawkgirl are the redeeming parts of the issue, as is the introduction of Solomon Grundy and his connection to Alan Scott (think the green and the rot from Swamp Thing and Animal Man). Robinson’s take on the Green Lantern is pretty neat, and I’m intrigued by how it will play out in future issues. I like the idea of a chosen avatar to wield the green, and while the explanation of the Green Lantern costume isn’t satisfactory, it’s serviceable to get the plot moving.

The vibrancy of Alex Sinclair and Pete Pantazis’ colors is particularly noticeable in the moments between Jay Garrick and Hawkgirl, as well as when Alan becomes the Lantern. The finishes add smoothness to the imagery and the book is polished and clean-looking.

I’m digging Earth 2 a lot. I like the final pages where Grundy makes a return. I’m not crazy on the character design, but I like the role he’s playing in the series. Right now, it’s like James Robinson is moving his chess pieces into place, and next he’s going to launch a serious attack. With the setup out of the way, it’ll be interesting to see what he has planned for the characters. 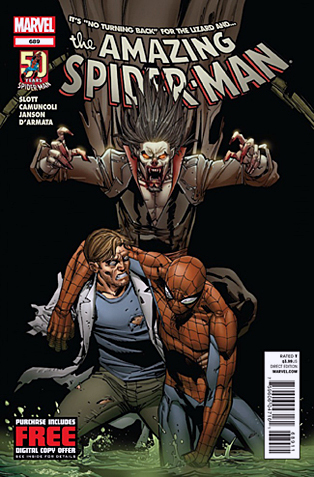 Bannen’s Book of the Week: How convenient that the Amazing Spider-Man movie features the Lizard as its main villain, while the Lizard appears in the pages of Amazing Spider-Man this week. But where Marvel copped out with its “Back in Black” storyline (which was a tie-in with Spider-Man 3), Dan Slott delivers a much more interesting story, as Curt Connors has been totally consumed by the Lizard and Spider-Man has a cool knock-down drag-out with Morbius.

The cover of the issue is misleading, because this moment never occurs. In fact, Morbius is really the victim of the issue, and Connors plays the predator. Fans who read Mark Waid’s arc, “Shed,” know that Connors has been completely taken over by the lizard, so while he looks normal on the outside, his internal voice is a horror show. Slott plays with this a lot, having Connors figure out ways to act human (like smiling and crying), all while plotting how to kill those around him. Morbius has been played as the redeemable scientist, but in this issue Slott reminds us why he’s so dangerous. The issue was particularly fun to read and had a few surprising twists that caught me off guard.

Giuseppe Camuncoli’s art reminds me of Charlie Adlard’s pencils in The Walking Dead. Characters are thinly inked and angular, but Camuncoli’s best work is his character expressions. Curt Connors in particular is a man of many faces in this issue, and all of them are crazy. Camuncoli really sells the Lizard trapped in Connors’ body, as well as illustrating a great fight sequence between Peter and Morbius.

After the major “End of the Earth” arc, I’m glad to see Slott scale the story back. Too many characters and too many stakes make the issues weighty and lately, Slott has been pumping out one major arc after another. This looks like a short arc that has a much more emotional Peter than we saw in “EotE,” and I, for one, am loving it.