I was playing Manhunter 2: San Francisco on my computer in the basement. I really liked that game and to this day I wait for a sequel. I was a sophomore in high school. When I shut off the computer and went upstairs around 9 p.m., my grandmother was watching the news and the Berlin Wall was coming down. We were seeing history happen from our living room, as the Soviet Union crumbled on our TV. My grandmother said, “Joseph Stalin was a monster.”

One of the first things I thought was, “Who is going to be the bad guy now?” The Nazis were great bad guys, because we beat them and we won. Now we “beat” the Soviet Union. But did we win, or did they just fall apart? 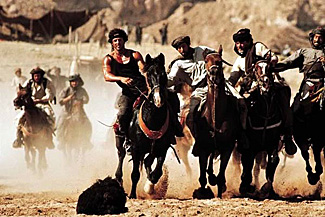 At this point in my life, I had learned to appreciate the Soviets as a formidable foe. Heavy metal bands have always sung about the threat of world war and a nuclear wasteland. I always felt that Nazi imagery fell to the side of shock value rather than actual concern. The Nazis were done, beaten and not a real threat anymore. Slayer’s song “Angel of Death” is awesome, but it comes across more as a history lesson than a warning, like in the classic Black Sabbath song, “War Pigs.”

In the ’80s we hated the Soviets so much we sent Rocky Balboa over there in Rocky IV to fight Ivan Drago. He did this not only to avenge the death of Apollo Creed but to go there and win for America. Three years later, in Rambo III, we sent John Rambo to fight alongside the Taliban during the Soviet occupation of Afghanistan. Some thirteen years later, the plot of Rambo III made for some very awkward conversations among American patriots.

There was a time when it was OK to be proud of who we defeated. Yakov Smirnoff made fun of communism and was embraced for it. Mel Brooks put Nazis in almost all his movies, because if you make fun of them you take away their power. You can’t do that anymore. Who would Rocky Balboa fight now? There used to be special issues of Playboy showing girls from behind the Iron Curtain. Now, this might be considered politically incorrect.

Regardless, communism came to an end with the guidance of Ronald Reagan and Mikhail Gorbachev, while under the watch of George Herbert Walker Bush. The evil empire was gone. But who were some of the victims of the Cold War?

One of the biggest victims was the James Bond franchise. Six years lapsed between License to Kill and Golden Eye, which is the longest gap in the series history. The reason? No good bad guys in the ‘90s. The opening scene of Golden Eye has a woman smashing a hammer and sickle.

We were inventing ways to have Soviets become the bad guys once again. The real-time strategy game, Command &Conquer, had to devise a way to have the Soviets be the aggressor. The plot of the Command & Conquer: Red Alert series stems from an event where Albert Einstein goes go back in time and kills Adolf Hitler. He actually shook Hitler’s hand, which in turn causes some kind of issue with the space-time continuum and blinks Adolf out of existence. This action results in Joseph Stalin being the antagonist (or protagonist depending on which side you choose) for the first game. This alternative history storyline lasted for two more games. 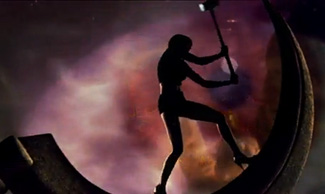 I miss simpler times, when political thought and secular ideas were the enemy and not religion. There was no need to be as culturally aware of the enemy when the Soviets were the dominant threat. The Soviets are a much more fun bad guy than any terrorist organization. Spies Like Us would have sucked in the Middle East.

I don’t think the movie Firefox would work out too well now, either. Clint Eastwood had to steal a secret Soviet fighter plane by means of “thinking in Russian.” For whatever reason, the plane would only respond to people who were Russian. Terrorists don’t generally have cool top-secret aircraft.

Now with the North Korean nuclear threat we might get some better fiction. Currently, we have Team America: World Police and the new Red Dawn movie. So far it isn’t looking good for us – or South Korea for that matter. Maybe a slew of new thrash bands will come out with Korean nuclear warfare imagery. I don’t want a war; I just want something good to come out of all this conflict. Just so you know, I really like Korean fried chicken.

Let’s be honest, it is better when the bad guys are Caucasian. It’s easier for everyone involved. The Soviets were the last hope and you had to go and overthrow them.